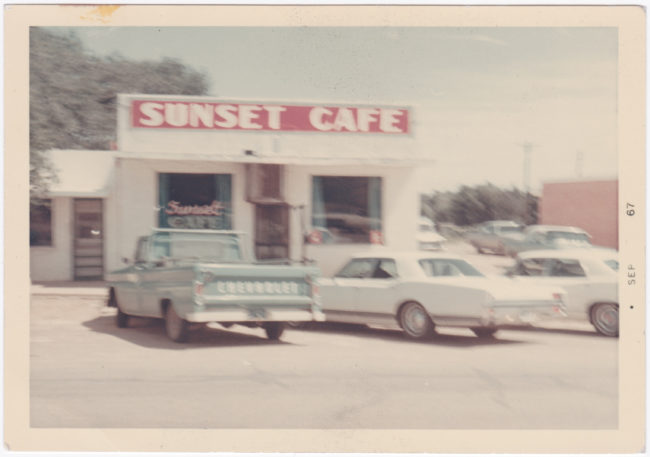 They’d meet at the same time every Sunday, order the same meals, and share the same conversation from the week before—a temporary lighthouse for two ships adrift at sea.

The younger one was always early, and the only thing that kept her mind from wandering back to life at home was wondering about the restaurant’s signs and why there were two of them. Their favorite waiter would save the window booth for them, and Carly would stare at the neon letters and ponder the question and come up with the same answer each time.

It’s because of the walkers. This one is for those hungry folks passing by on foot.

She’d bow her head and laugh, her thought moving to the restaurant’s name and why a place called “Sunset” was open for breakfast.

They weren’t twins or sisters, but they drove identical cars. They also looked enough alike that most people thought they were siblings, and when someone posed the question Carly and Josephine wouldn’t deny it. Sometimes the story even went like this:

They were born a year apart, first Josephine, then Caroline, and both were given up for adoption. Their new families would serendipitously move to the same suburb in the same zip code, two young lives once flung apart not to other ends of the earth to be brought together well into adulthood for a heartfelt and tearful reunion but to the very same neighborhood, separated by a few streets. They would meet at age nine and ten and discover the truth about their pasts.

Some people didn’t buy the tale, but most thought it too crazy to be fiction. The nonbelievers would smile and nod and usually try to end the conversation, making up their own story about a late appointment or an errand to run, but the faithful almost always wanted to hear more.

Josephine once veered from the norm and ordered eggs benedict, something she had never tried before, and regretted her choice all week.

Each had their own reasons for never wanting to look for their birth parents, but they never discussed them.

Carly constructed a narrative in her mind about the man and woman who had traded her in for a different life. It expanded and contracted over the years, morphing every few retellings and creating more questions than answers. She began to view life as a giant experiment, only hers had a hypothesis that could never be proved.

Josephine had long before disavowed any notion that a man and woman had looked her in the eyes and passed.

Almost seventy-five percent of adopted children between 0 and 5 years old are read to every day in the U.S. This is higher than children raised by their birth parents.

Carly looked at the sign as she sipped her coffee and waited. I guess the sun is setting somewhere right now. She then remembered that the sun also rises.

Hemingway spent some time in Key West, and Carly once visited the house where he lived and wrote and drank.

Tennessee Williams lives there, and some believe he put the finishing touches on A Streetcar Named Desire at a hotel in the city. Carly hoped to experience a sighting, but it only happened in a dream well after she had returned home.

She doesn’t know if Truman Capote has ever been to the Keys, but he’s done some research throughout the state and probably drops in on family from time to time.

Jack Kerouac once lived down the street from her, and her favorite, Zora Neale Hurston, grew up around the corner.

The one time Josephine arrived earlier than Carly she was surprised to notice how spotless the utensils were, and she thought about all the times she had run her fork or spoon between the folds of a napkin before eating. She stared at the silverware and laughed, ignoring her reflection in the butter knife.

She took sips of orange juice and waited for her friend.

Neighbors sometimes spotted Carly coming down the street and waved, yelling out “Morning, Josephine!,” and vice versa. Each time this happened, Carly or Josephine just waved back and kept on driving.

They shared clothes but never shoes.

Stevens once broke his hand against Hemingway’s jaw outside a Key West bar.

It was a Saturday when a hurricane took the town and the café with it. News outlets reported how letters from the sign were found miles away, with one even stuck in the roof of a house that had otherwise escaped destruction.

Carly and Josephine had to find a new place to meet, but it took some time. Neither one enjoyed change very much, and a new place meant a new menu, new staff, new utensils. New coffee.

They dispensed with the stories, smiling and nodding whenever someone mentioned their likeness. They made a pact to never order the same meal twice.

Carly was still always early, but instead of staring at signs she would read a book. Josephine never looked at her utensils, and she never wiped them in her napkin.