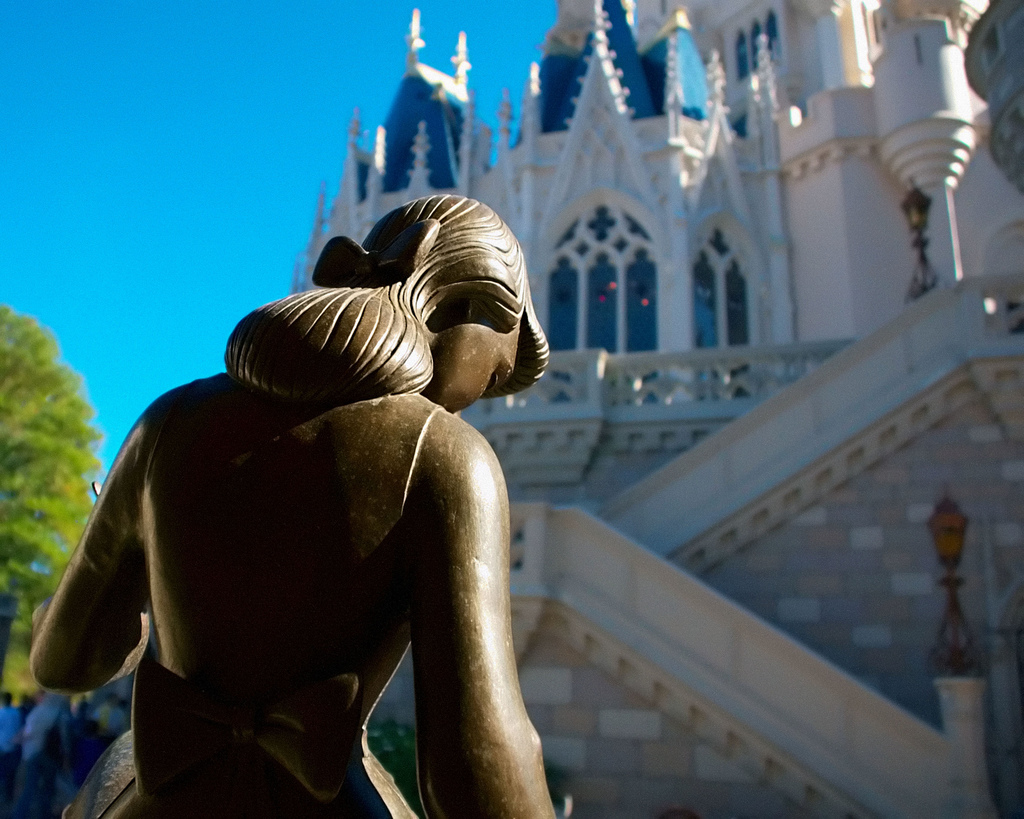 “What’s her name this time?” said Jennifer, my friend and colleague.

“Marina,” I said. “She’s a waitress at the Jetsetter Lounge, and happens to be rather inappropriately young.”

“Twenty-one, although at first I thought for some reason that she was just barely twenty-three.”

Jennifer shrugged, by now resigned to my desperate, quixotic attempts at companionship. While Jen had been happily married since the age of twenty-two, my own nearly-supernatural string of failed attempts at romance—not relationships that didn’t work out, but rather the general failure to get even a first date—made me tremulously consider the inappropriate. I was in one of those long spells of loneliness that renders the plays of Beckett realistic.

In 2007, I was a non-tenure track instructor of literature and composition in South Florida. I couldn’t get a tenure-line job with my PhD anywhere in the United States. I was paid less than a living wage to work seventy hours a week in a position that didn’t have any promise of even dragging into the future. The obligatory novel I was writing gasped beneath an avalanche of student papers to grade.

I had been single and lonely for so long that I wasn’t sure what actual happiness might feel like. Maybe better than conversations with bored strippers? Better than reading Proust’s depictions of hopelessly unsatisfying love?

“Even twenty-three is too young for me now, isn’t it?” I was thirty-five.

“That,” Jennifer said, “depends on the relative maturity of this person.”

Marina was not an especially mature twenty-one year old. She worked seasonally for Walt Disney World among its 67,000 cast members. She was an actor at heart, prone to flights of imagination and singing. When not working, she would costume herself as Belle from Beauty and the Beast, both in her baby blue country dress and white pinafore, and in her ruffled, silky, yellow ball gown. I thought the habit simultaneously disturbing and delightful. With a bright red ribbon atop her dark hair, she was quite a casual likeness of Snow White, even in jeans and a t-shirt.

I was already in love with her.

From our first words together, our conversations were almost as if we were old friends, harmonizing into the same wavelengths.

Marina was living in South Florida with her parents after moving away from Orlando, after breaking up with her boyfriend, a literal hunchback who also worked for Walt Disney World, at the Crystal Palace restaurant. Despite her recent pain, Marina smiled easily, a cherubic, cheeky smile. She dreamed of performing in musical theater. Every moment percolated with imaginative possibility. Her kisses tasted of bubble gum lip-gloss.

“You are a disgustingly good listener,” she told me once, ensconced in my arms, on a moonlit beach. These were fun conversations, yet weighty, too, full of ambitions, adventure, romantic regrets, and a sense of personas vibrating both inside and out, and that being all right somehow. We mattered to one another. We both understood the sublime madness of Disney obsession. We danced at the Jetsetter Lounge, and one night I lay in her lap on one of its immaculately themed mod leather couches while she wore my jacket.

She and I made a cute couple, if we were becoming a couple. I allowed an adolescent amount of ambiguity to exist about our relationship, because Marina seemed so young, and she allowed me to be someone who wasn’t a failure at the end of a career that had never begun. It was an elusive form of acceptance.

When she secured an admission interview for a musical theatre program in Orlando, not far from the theme parks, she decided to make a full whirlwind of the weekend. She planned to stay on Disney property with a hipster couple who were old friends of hers, meet with a flock of her fellow cast members, and attend the park after her college interview. When Marina seemed nervous about the drive from Boynton Beach, I offered (rather gallantly, no?) to take her up in my SUV and show my support.

The next day Marina and I zoomed up to Orlando together. The drive held the intoxicating sense of leaving the routine of teaching and grading behind for three whole days. Sort of. Marina was lifting her laptop toward passing eighteen-wheelers, hoping to hitchhike on their Wi-Fi for a mile or two, to check Facebook.

The newness of the surroundings at the Pop Century resort matched the newness of our relationship. By the evening, we were poolside, her in a cute Hawaiian bikini, me in brown, 1970s-retro board-shorts that simultaneously made me look like myself and my own younger incarnation. Her pool party underneath the three-story jukebox attracted a dozen or so male guests, all of us treading water around hyperactive families. All of her friends were boys. They were all smitten.

The undulating luminescence of the lukewarm water, before the neon-like halo of that epic record player—doo-wop harmonizing gently from the shrubbery—infused me with an electric sense of my lost adolescence (of an ideal adolescence I never got to experience, actually, since I only knew the fifties from the absurd nostalgia of Happy Days). The fellows eyed me with approval, wariness, and commiseration.

The exhilaration of this scene was lingering in my skin and marrow when, a short while later, the party moved indoors and sprawled across the beds of the hotel room. I had changed into cargo shorts and black tee, while the others were wrapped in white towels, sitting in the chairs and on the comforter’s iconic montages, symbols of fifty years of mainstream history. At Pop Century, I couldn’t be older than 29, my age at the end of the millennia. I could time travel. I was timeless.

As she chatted up everyone, Marina was slouched back, her arms and back resting familiarly against my legs.

One gent was a friend of her ex.

I could feel her shallow breathing against the skin of my legs. I could feel my involuntary organs doing their work. My vision blurred with spots.

The gent was optimistic that her ex still loved her.

And then the party was over.

The hipster couple was staying in the room. Before long, I stared at the ceiling as Marina slept on a sleeping bag on the floor. She insisted on this arrangement, and I was too shattered to insist on switching places. In the night I heard her quietly crying. Any comfort I could offer her would only come at the expense of humiliating her by involving her two friends with her grief.

The next morning at breakfast by ourselves, she sat across from me and revealed the nightmare that had shocked her out of sleep: her ex was a piteous corpse, and she was not there for him to stop this vague, yet urgent catastrophe. And I listened with compassion as best I could, even though this conversation seemed catastrophic enough to me. She wouldn’t let me hug her when the tears came anew to her eyes.

She nailed the interview an hour later, accepted into the program on the spot, after singing “Part of Your World” from The Little Mermaid.

We drove back to Walt Disney World, to meet up with her two hipster friends and tour the Magic Kingdom. Marina tried to avoid eye contact with me without looking like she was avoiding eye contact with me. I stiffly attempted the same. My bones hurt, like I’d been thrown off a building.

As the group of us boarded a giant honey pot for Winnie-the-Pooh, I thought of the un-graded mound of papers atop my desk at home. We crept around the darkness of The Haunted Mansion, floated dreamily through Song of the South, and held onto the runaway train of Big Thunder Mountain Railroad. Marina’s friends, for reasons of their own, weren’t enjoying themselves, sniffing at the rides as if fun or even locomotion were toxic. I wondered how many of the 73,592 guests in the park that day were experiencing anything like this.

As the evening approached, we were going to split up the party for an hour. Marina had, in the face of all etiquette, arranged to have dinner alone with an old friend (another fellow who just happened to know her ex). I walked with her down to Main Street, left her at Casey’s Corner hot dog stand, and then dragged myself to the park entrance.

The giant A-frame of the Contemporary Resort loomed a hundred yards away. Up in the fourth floor lounge, on the Grand Canyon Concourse, I managed to drink three fizzing double gin and tonics in about forty minutes. The bartender loaned me a slip of paper, and I scribbled a few new sentences to my novel. The daughter of one of my characters had written an intellectually snarky letter to one of her teachers, who happened to be a nun:

Elliot Cooke held this incriminating epistle limply in his hand, a blankly blank stupor upon his face. He doubted the possession of any parenting skills whatsoever in his forty year-old anatomical shell. He was not angry with his unorthodox daughter, nor even stunned by her absolute unappreciativeness in regard to the usurious tuition of St. Ursula’s. Instead…

I had been waiting for these three sentences for months. “Why now?” I wondered. What I didn’t suspect then—but know now—was that this appearance of any Muse was a grace alighting upon me. Sure, this Muse was maximalist, and this father-daughter conflict perhaps bore an alarming psychic resemblance to myself and the wayward Marina, the working of whose young mind was, as I had just learned, inscrutable to me—but these few ebullient, beautiful sentences were a reason, however slender, and elusive, to go down and face the rest of this nightmare. Writing (and icy double gin and tonics) could console me, even at desperately bad moments. My shaky words could, just barely, make the difference. With the salvation of these sentences in my pocket, I lurched back to the deadness of the Magic Kingdom.

The pressure of choosing another attraction proved nearly too much for Marina’s friends.

“Do you want to ride the train?” Marina asked them.

“Does it go all around, and you can get off in different places?” the hipster boy asked.

“You can get off anywhere you want,” I suggested. “You just have to use your hands.”

It felt almost good, to be something. But then my intoxication began to backslide, the hangover appearing and then escalating like an angry, molten implosion in my mind.

Then I couldn’t stop looking at Marina, that red ribbon in her hair, that youthful bounce in her step. That toothy, cheeky smile that seemed imbued with just a hint of the tension of sorrow, sorrow she would never show me again. It was no longer mine to share. I only had my own ample pain now.

The four of us finally decided to leave. We were arriving at the hub, where part of the path from Adventureland swoops by the Crystal Palace before grafting into Main Street. Marina stopped short, staring into the restaurant, with a low, raspy squeal. The underside of her jaw swelled. Her hands fluttered. Her friends kept walking, then swarmed Marina, and started a litany of insults against the ex who had broken her heart.

There I was gazing through the festive gloom of an anachronistic Victorian street, squinting into the Crystal Palace looking for my hunchbacked rival. After a few interminable moments, I realized that it didn’t matter anymore, even though the pain remained.

“Let’s go,” said Marina, walking unsteadily towards the storefronts, and the exit.