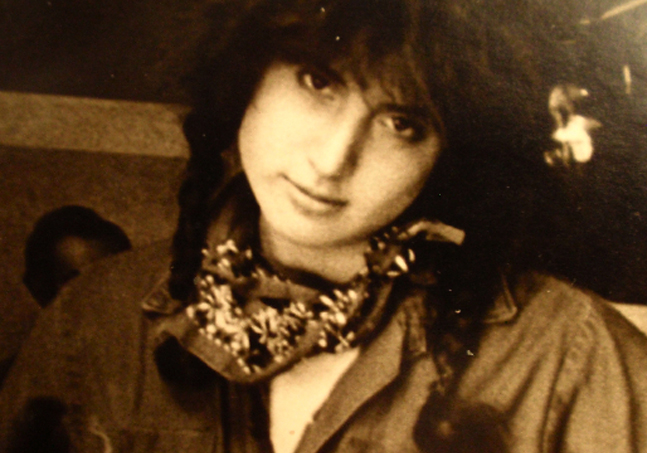 Like me, Luke was eighteen. Like me, Luke played guitar. Like me, Luke wrote bad poetry. But unlike me, Luke was serving time in a correctional facility. Intrigued by this mysterious Californian, I carefully read his chicken-scratch writing and studied the photo he included with his letter—a skinny blonde-haired, blue-eyed boy playing the guitar. I showed a friend who lived down the hall. “He looks like Sean Cassidy!” she said, a jealous tinge to her voice. He sort of did look like Sean Cassidy, without the bad skin. I pinned Luke’s picture up on my bulletin board next to a picture of my white pocket poodle and a ticket stub from a Kenny Loggins concert.

A month before, I flipped through the classified section of Rolling Stone. An ad caught my eye: Free Pen Pals From All Over the World! Since I couldn’t travel the world, maybe the world could travel to me. I sent in my name and age, and a week later, received a letter from the pen pal company. For a ten-dollar fee, they’d send me a list of pen pals. Forget that! I ought to complain to the attorney general for false advertising! Yet a few days later, tissue-thin airmail letters arrived from India, Brazil, Japan. All written by lonely men wanting a young American girlfriend. Even though I attended a small liberal arts college where females outnumbered males, I wasn’t that desperate.

And then I received Luke’s letter.

I sent him a photo of myself playing the guitar and he responded, “You’re more beautiful than I imagined.” How could I argue with that? After a few weeks of written letters, I asked Luke if he had access to a cassette recorder. This was in the early ‘80s, long before Internet dating or text-messaging. Eight track tapes were on their way out, but not totally.

And thus, we began to record our letters. Luke, originally from Alabama, had a thick Southern accent. His drawl sounded romantic and foreign to me—a shy Jewish girl from Long Island. On our tapes, we talked about our families, music we liked, our goals in life. I sang him original songs, songs I wouldn’t dare play for anyone else.

I felt safe with Luke. And he told me how talented and smart and beautiful I was. “And one more thing,” he added at the end of one of his tapes. “I think I’m falling in love with you.” I didn’t respond to the falling-in-love part of the tape, but I had to admit, I liked it. What eighteen-year-old girl wouldn’t want a cute boy telling her how wonderful she was? At school I got drunk and kissed boys, but none of them took an interest in my music or art or me the way Luke did.

I finally worked up the nerve to ask Luke what he was in prison for.

“Drugs,” he said. “Got caught with two pounds of marijuana.”

Poor kid. What bad luck! After all, my friend Teri brought back pounds of marijuana from New York on a weekly basis. With her hallway door wide open, she’d weigh out her stash on a scale and pack Baggies, never concerned about breaking laws or going to prison.

In one tape, Luke told me he was in a fight; his jaw broke and had to be wired back together. “It hurts like hell,” he mumbled. “But just thinkin’ of you makes the pain easier to swallow.”

How could this loving man-boy, the boy who sang me romantic songs and wrote poetry about roses and sunsets, how could he be violent?

In the meantime, my friends at school asked if Luke could hook them up with their own cute prison pen pals. He was happy to oblige. Perhaps each address he divvied out earned him some clout—some money or cigarettes in a place where the idea of a sexy college girl could go a long way. Within a week or so, four of my friends began to correspond with four of Luke’s prison-mates.

I never went to a high school prom; I always felt like an outsider, but now I felt like I belonged to an exclusive club. In the cafeteria, my friends gave me updates on their men; they shared pictures they’d received, the intimate stories of screwed up families and foster care. “My prison pal comes from San Francisco,” one friend told me. “He says when he gets out, he’ll show me around and take me to the Redwood Forest.” Another friend showed me a picture of a chisel-faced, dark-haired boy holding a basketball. “He used to be a model,” she said, “for the Sears Roebuck catalog.”

About a month into her correspondence, another friend received a pearl necklace in the mail. Her prison pen pal told her that his mother gave him the necklace on her deathbed and he should give it to the woman he loved. My friend, let’s call her Shelly, wore the necklace with pride, as if it were a war medal she’d earned for a heroic act. She caressed the deathbed pearls, reminding herself and others, I suppose, that yes, she was capable of being loved and loving another. The relationship between Shelly and her prison pal intensified. They wrote letters to each other every day. In one letter to Shelly, her prison pal mentioned that Luke had a big black boyfriend, a guy he slept with for protection.

She fingered her pearls. “Don’t tell him I told you.”

The next time I recorded a letter to Luke, I couldn’t help but mention the rumor of the boyfriend. “It upset me to think your friend would be spreading lies about you,” I said.

Luke, angered by the accusation, categorically denied it. “I’m a full-blooded straight man,” he declared.

Soon after, my other friend learned from her Sears Roebuck prisoner that Luke was in the slammer for armed robbery and involuntary manslaughter, not drugs.

Spring was already in the air and things were getting messy, between my friends, and between the guys in prison. And then I got a message from Luke: “I’m planning to leave this hell-hole by summer’s end and the first thing I want to do is visit you.”

The possibility of meeting Luke scared me. Did I really want to ruin my fantasy and meet a wire-jawed criminal?

I took longer and longer to respond to Luke’s letters. Eventually our communication died. Within six months, all correspondence between my friends and their prison pals ceased. Shelly forgave me.

Twenty years later, my father emptied out his storage space and sent me boxes of art supplies and books from my college days. In the bottom of one box, I found Luke’s tapes bundled together with a dried-out rubber band. I popped a tape in my cassette player and Luke’s warbled voice echoed from my speakers: “Lori, this is for you,” he said. He sang a song about the moon and love and ponies. It was awful.

That same day, I emailed Shelly and asked what she remembered about that time. She wrote:

I DEFINITELY remember our prison pals! Yours was named Luke, and we called him Lurch. And you sent him tape recordings in this sexy voice, and all the prison pals fell in love with you. Mine sent me this crappy necklace that his mom had given him on her deathbed and made him promise to give it to his future wife, and he sent it to me after like one exchanged letter. It completely creeped me out, and I never wrote back. Nor did I send the necklace back, though it was kind of Cracker Jack-toy quality. I couldn’t quite figure out for myself whether his line was genuine or these prison dudes have a racket going. And then I read some article in Psychology Today about these pathetic women who fall in love with their prison pals because they can’t handle real relationships, and the whole dynamic gave me the willies. I could just imagine them all, semi-illiterate and bored out of their minds, masturbating to letters from girls they’d never met. Yich.

Perhaps everything about our prison pals was bogus, but back in college, I don’t remember Shelly doubting the authenticity of those pearls. And I never doubted Luke’s words. In fact, before we left college for that summer, I tapped on Shelly’s door. She had just begun to pack. “I didn’t realize how much crap I have,” she said. We talked about our summer plans. She had a camp counselor job lined up; I was on my way to Israel to work on a farm. On her bed, she rolled up a pile of posters and once she had them in a tight roll, she pointed to her dresser and asked me to get her a piece of masking tape. Next to the roll of tape, the pearl necklace spilled from her jewelry box––little sparkly teeth smiling at how the room had fallen quiet.