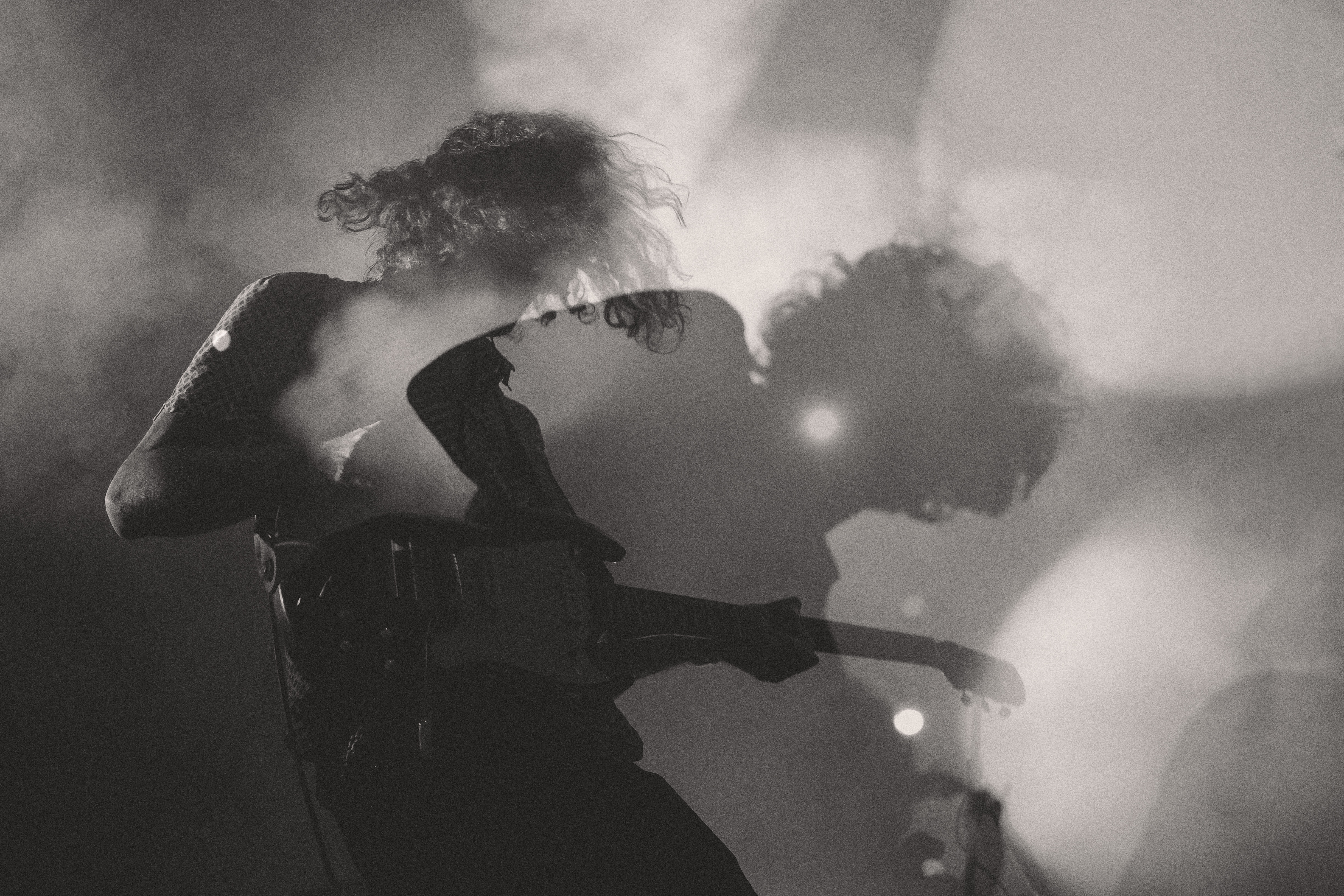 Behind the Music: Marcus Blanda

I sing of the man Marcus Blanda,
orphaned in Cleveland,
raised here in Tampa,
where he lazed on a stretch of white sand
and skated the rough macadam
of his adopted land
and made coasting his game plan
till one day at the State Fairgrounds
the Krishnas handed
this impressionable young man
their most impressive propaganda,
which led our quick-study kid
to shave his thick head,
put on robes, learn to dance,
clap his hands
while someone made sounds
with a beat-up harmonium
at the airport terminal—
not exactly original.
He lasted six months
till the Krishnas asked him politely
to beat it,
it being obvious to all he
couldn’t stand the music
let alone the celibacy.
Too late then—
his parents disowned him.
He hit the shelled streets,
found work at the Playpen,
wiping down dance poles and tables,
sneaking peeks at the stables
of ladies whose hired husbands
made them financially able.
The whole time, he was squatting out back
in the maintenance shack
of the shuttered Army-Navy,
a dude turning angry and whack.
But then a turn toward the light:
he met some ballsacks who arrived one night
sporting structures of hair and a keening to fight
derived from speed and vegan food
(and music to set the mood).
Marcus quit on the spot, the story goes,
and I should know
‘cause I’m the one who asked his doughy face,
“Hey man, can you play the bass?”
and his mouth said “yes”
before his brain could reject it—
a sure sign of grace.
So there you have it.
There’s more to the story
but you shouldn’t expect it,
not without a legal deposition
or some narrative takeover
because frankly I’m sick of the Blanda shitstorm
and the questions and requests to perform—
it’s time I shut down this exposition
like a lazy rhetorician
and declare this verse to be over.

Word: I watched Marcus Blanda,
dressed like some kind of angry panda,
steal his axe from the back seat
of the car of some band
on tour with Pantera.
The man never had skills
excepting the Townshendesque windmills
that averred more fury than noise.
It was Chorus, our singer—real name Morris—
who took Marcus to meet us,
saying, “This man’s got the poise
of a herd of Bolshois,” and hyperbole aside
the guy could dance without insult—
he’d learned his moves from a cult—
but no one would call him Godonov
except maybe Chorus himself,
who had a voice like black velvet
but flat feet stuck to the mic stand
like marshmallow fluff.
The timing was right—
we got called to open for Black Flag
on three dates in the South—
for us the best win
if you don’t count that night
we used Johnny Rotten as a punching bag
when he wouldn’t stop running his mouth—
that made the cover of Spin.
Blanda wasn’t exactly aloof—
he just kept to himself.
You could say he didn’t fit in,
but it’s also pretty obvious
he settled on us like Stardust
and made us his Spiders from Mars.
The cat was mesmerizing—
his every move harmonizing
with some far-out vibes from above.
He was musically weak
but turned weakness to strength,
bending his fat strings
around notes that only half-mattered
till he framed them with thunder.
As a punk band from Tampa
we were treated like kicked sand—
a nuisance and a bother
to be brushed aside
or shoved off the stage as fodder
for mosh pit marauders
and their skinhead soldiers
down front—that shit happened, no lie.
But Blanda kept thundering
while the rest of us took a pounding—
a band of one in the spotlight,
beyond the fray or causing it—
who knew?
And you couldn’t get pissed at him—
he was wrapped in a low-frequency cocoon,
riding long waves high to the moon,
eyes on the vibes
even with Nazis biting his thigh
(and that’s true, too).
Hey, this kid was amplified!
And pretty soon people took notice.
We had two songs and three chords
but still got a deal when Tentacles wrote us.
We worked hard but couldn’t produce,
and Blanda was no help—
already hitting the juice.
Whatever—we rented the studio anyway.
Of course, Blanda slipped away the next day.
Then what?
Should we dump him or kill him
or fall on our swords?
We needed muscle.
We needed raw hustle.
So our drummer stepped forward
and packed up his duffel—
the brute y’all know as Curious Russell.

Enough of that shit,
we had a record to make.
If Blanda runs off
he’s got a pounding to take.
I never bought his trip.
The man was empty.
Those stars in his eyes
looked to me like confetti.
He thumbed his bass with random abandon,
like naïve good, a lucky stand-in—
just enough for me to work with,
or work around when I had to withstand him.
I’d yell at rehearsal
but no one could command him.
So it’s weird now to claim this,
but his bad playing was the nuclear reactor
that mutated our band from goodness to greatness
for a few weeks, at least, in the eighties.
Because once we embraced the wabi-sabi of his mistakes
we had a sound like a thousand rusted gates
crushed by an industrial compactor.
We weren’t just great,
we were fucking great,
if you reject the mistake
of taking what’s popular for greatness.
I knew our moment had come.
And I knew where Blanda’d be.
I told my bandmates
to leave it to me
and I hit it.
My old-school Buick was fluent
in the peels and roars of the asphalt rubric
and the booming acoustics
of interstate music.
I cleaved through drunken weavers
and the left-lane underachievers,
weaving onto shoulders and grass
with a deft double-pass
and a blast of pope smoke from my glasspack.
I crossed ditches and bridges—
Get out my way, bitches!
I cut straight down the exit ramp’s bank
to blow through a light and escape
the blue light specials trapped by traffic,
lacking the choreographic magic
of my nimble V-8.
Then straight between condos
and down to the beach,
to a tiki bar called Fernando’s
where midday ritas were three dollars each.
There lay our hero, face-down and unbreeched.
I grabbed his foot and his trousers,
paid his bill and dragged his ass up onto the backseat,
took the back roads back
at maximum power.
The clock was ticking,
the studio rented by the hour.
I carried him in and we smacked him awake
with fists and cocaine
till he puked up what looked like deviled eggs and steak.
We strapped him to his bass,
his eyes still closed but his hands wide awake,
so each song got just one take.
I’d never seen anything like it—
the bass used Blanda to perform its magic,
taking charge of the man’s hands and issuing commands—
the sound made our heads expand
as the magic spread to the rest of the band
and our future unfurled before us,
the vocals of Chorus an exploding borealis,
Sam Stabbe’s Ibanez efflorescing the lightning
dispatched from my drumheads and cymbals.
We were a rampaging brontosaurus,
pissed at the sky and cursing our fate,
a monster uncaged by the force of our rage.
And soon it was finished:
a six-track EP,
two of the tunes
essentially repeated,
with lyrics changed
to hide that we cheated,
and a bridge of random riffs we reheated.
But it was done, and we were through
in more ways than we knew.
Blanda vanished, and we never could find him—
not at Fernando’s or back with the Krishnas,
not at his parents’—they’d already dismissed him.
Meanwhile, the EP got released
and the splash it made on the alt-airwaves
made us instantly famous—
if that’s the right word for a stir
among headbangers whose basis for greatness
is any repudiation, no matter how heinous,
of the fluorescent sewer of top-40 lameness.
So we made certain playlists,
but it didn’t last long.
The mystery of Blanda
heightened our mystique,
but mystique dies quick
once talk of it peaks.
With no word of his whereabouts
we suited up a sub and set out.
The crowds thinned at every new stop.
It was hard to admit, but we sucked.
And the new guy didn’t make the cut;
quiet at first, he was a competent bassist,
but, like Blanda, he drank, and the drink turned him racist.
He shouted out shit in the midst of a show,
Till some black guy kicked his ass
and another fired an Olde English 40 from a crossbow.
Uh, okay, time to go.
That was the end.
We never played a club again.
So quick to splash, our EP sank just as fast.
Now the years have passed
and I’ve lost teeth and some speed on my sticks.
My rage runs deep but who gives two shits
when the gigs I play these days
could be tapped out with chopsticks.
I still cruise his old haunts
when I play private clubs for debutantes
or Buffett covers in beachside restaurants.
But if I ever find him, I’ll steer clear
for fear of my own stare reflected
in time’s funhouse mirror.
The man is gone, and that’s to the good.
Legends never die, but the legendary should.

Marcus Blanda was no candle with two ends.
He was a flaming match at the farting ass
of fate doing deep knee-bends.
And here I am, singing of him again,
when all I want’s to make amends
with the glorious whats that could have been.
I mean, who’d’ve thought so much depends
on one thumping bass to make a band’s sound?
Who’d’ve thought your life could turn ripe
then rot posthaste into the ground?
Marcus Blanda flared and was gone.
How were we supposed to move on?
I tried and couldn’t,
so I retired from music,
found work as a sous chef
in our local Asian-fusion,
and don’t stay in tune with the others.
As for Marcus, what’s it matter?
He ascended some celestial ladder
and reeled off high on hell’s ether.
I try not to speak of him, let alone sing,
but when I’m stoned and alone
my battered thoughts cling
to those daggers of glory
when our band was the story
that lifted us up on its wings.
When I sing of him now,
I hear that bass like a wail at the wall:
I guess a moment of grace
before the fall
is all that you get
—if you get it at all.