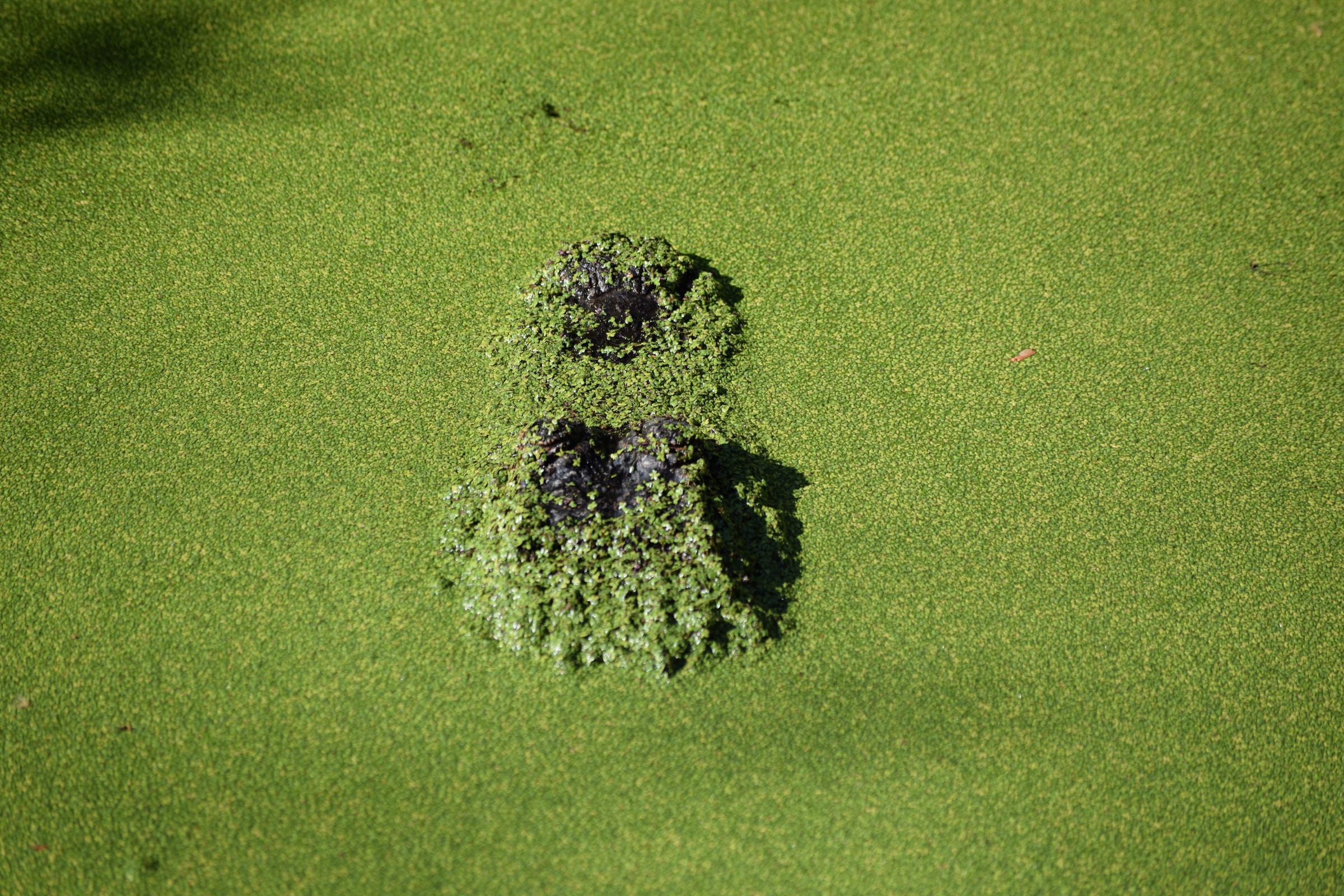 They can look like a large branch floating downstream,
motionless in water. I saw an alligator in a clear pool—
its stubby arms dangling like an afterthought to its body,
its jowls a fat ring. An awkward animal. A disfigured cat.
A smashed sack of teeth. An armored pig. For hours,
the alligator floated, unalarmed until it slunk into the reeds.
How charming, I thought, where I could see it completely.
Along a trail, it would be different, sliding silently through
grass and taking what it wants into the black water, its scaled
belly. This happens in Florida. I’ve read the headlines:
man rescues dog from jaws of alligator, police find arms and legs
in stomach, gators get territorial in housing development. They line
a canal’s bank, invisible except for where they break
the surface. It’s hard to imagine an alligator being born.
They grow from hardened muck and do not burst from
leathery eggs like other reptiles. A python pushes its head
through such eggs. It grows by unhinging its jaw and sliding
its muscles around whatever it has squeezed: a dog, a deer.
A python is a belly, a grape-sized brain, a muscled tube.
Once, I lived on the edge of a canal. The alligators bobbed
to the surface. Once, I saw an alligator with a bulging torso
and a head that dissolved into the dark so both ends tapered
to nothing. Its vague outline—an image and a mirror bisecting
it so the visible parts repeat; the eye cannot make sense
of what it sees. The alligator struggled. I left the porch, flash-
light in hand. I expected it to leap at me like thick lightning.
But it twisted listlessly. I found the tail, the legs. Its belly
pulsed rapidly. The coiled smooth of a python. I swept
my light across the animals which had fused. A snake
with legs sprouting from its head, an alligator with a snout
whorling into oblivion. A dragon on the canal. A scaled
throbbing, a gurgling. Where the alligator’s head should
have been, the snake’s. Its triangle wrenched dumbly wide,
feet limp in its mouth’s corners. The python contracted;
the alligator’s head within pushed against the inside. I tried
to touch it. Its tail corkscrewed, regurgitating its meal. Two
again. The living snake, the alligator slicked with stomach juices.

My mother died a few days earlier.
It was not the summer I asked for.
In the yard, I stared: gnats in black
clouds, barely visible in the evening,
my neighbors coming home, racing
to click their doors shut, the peach
tree stood, half-dead, without a single
fruit. I was still, but the tree was not.
The bark wriggled like a cold sweat
drew it into the earth and back into
the branches. I asked for a summer
with days that oozed from the night’s
unyielding hive, so long had I asked,
Will she live, will she get up and walk?
Time started my concerns—neither
the action nor the consequence in
my mind. As I looked more intently;
the bark did not drip and then rise.
There was no and then. The bark
dripped and rose—a stirring beneath
an agitated surface, not solid and not
liquid completely. What wiggled up
and down the tree’s spine like two
thoughts telling the brain no more and
it is time? I left my mother at hospice
to wash her nightgown and to bring
it back to her clean so she could sleep.
And then, I say. So much depending
on the layering of action, what was
and what will be. But not on the tree
that wiggles—the leaves’ shuddering,
the bark dripping-rising, my mother
hobbling from the car to a wheelchair
to her bed that adjusts with a button
at the same moment I stare at a tree
and wonder how can it move without
moving. I inched closer; the tree alive
as I had never seen—ants marching
up and down its trunk into its leaves,
into the grass, the dark tunnels. There
is no moment between steps for ants,
no distinguishing here from there,
when I left and when I will return.
Each moment interchangeable with
another. And this too is not what I
asked for—my living mother and my
dead mother both wriggling through
me, not the soiled nightgown and not
the clean in my hands and on her body
both. I wanted a past cemented—
the mind fixed in the present. Nothing
could call it back to when time began
every sentence—when, when, when—only
to melt into the dead, to become lesser
to the dead who experience no time,
like ants who go from A to B and back
as if in one moment. So full of time
I was then that I forgot how a person
can bloom and wither simultaneously
without considering the who and why
of it—my mother and the ants returning
to the earth outside and inside of me.

Stuck hinge,
his jaw,
my dog
bites not
the hand.
He eyes

what eyes
hinge
on a hand’s
movement. I jaw
not
my dogged

tongue. My dog
eyes
the knotted
snake unhinged
at the jaw
by my hand-

door. I don’t
hand
what is unhinged
to the dog
whose eyes
squint like clenched jaws.

Slack-jawed,
the boa’s knots
find the can’s eye.
My hand
strokes the dog;
his tongue swings

from his unhinged jaw.
My dog, a knot
under hand, closes his eyes.