The Works of Tele: Matt Kamm

“I would like to think that as we age with our work, we understand ourselves more. We become comfortable with our limitations and don’t see them as setbacks but as unique advantages in our approach to finding our voice. Creating is about the struggle of battling your own negative inner voice and discovering parts of oneself that you couldn’t unlock without addressing your fears. Art is the by-product of the process of actualizing the self and attempting to find peace and beauty amidst chaos and confusion–being comfortable with it all.” –Matt Kamm

Matt Kamm is a local musician and artist who was born and raised in Orlando, FL. There is no set formula for how this futurist creates. His work may be triggered by a passing moment with a stranger one day, a sound he hears walking through a museum, or a childhood memory brought to the surface. He is constantly working on new pieces sonically and visually, yet he’s also using his strengths to help other artists. Over the years, he has created a world where he can be himself and continually grow as an individual. Although he has occasionally shown work around town, he primarily uses his front porch and garage as a think tank, and prefers to save his energy for work opportunities which satisfy his enigmatic desires with integrity.

In his daytime work, Kamm currently supports other musicians as a consultant, manager, and occasionally as a producer. In his own music, he engineers and produces it himself with a few trusted friends. He has made incredible strides musically, from traveling and playing all over the country, to having Alex Wharton who worked with bands such as The Pixies and Radiohead master his latest album, to performing with Sean Moore for the Orlando Philharmonic Sounds of the Summer Series: Music of the Beatles on vocals, guitar, and piano in a 1,200 person capacity, sold-out show.

Matt isn’t boisterous in his talents, yet seems to casually share the things he’s working on like someone does about the daily events of their life–except their merit does the singing for him. A few years ago, he displayed and sold a few pieces at the Orlando Museum of Art, yet he reserves one of my favorite of his images, “Deterioration of An Endless Effort to Enjoy,” for his wife saying with resolve, “I will never sell this piece as it belongs to the private collection of Christina Kamm.” He finished it at home with his family on New Year’s Eve, while many other people were out partying. The feature image of this story, it was created from large pieces of wood and metal, which he says spoke to him in a way that canvas cannot, “You can feel the life that a piece of wood has had. Sometimes, buying a canvas outright can hinder its inception because it has little story and hardly any pain. Found pieces typically yield better results for me as they carry an energy.”

A couple weeks later Kamm got lost while driving with his family and ended up in Kolokee (slightly northeast of Oviedo). He pulled over to pee, and after walking for a little while to seclude himself, he saw a view of the field next to him while mid-stream and was certain that it was what he had painted. He views this piece of art as a sort of portal which he feels manifested in the back of his mind. 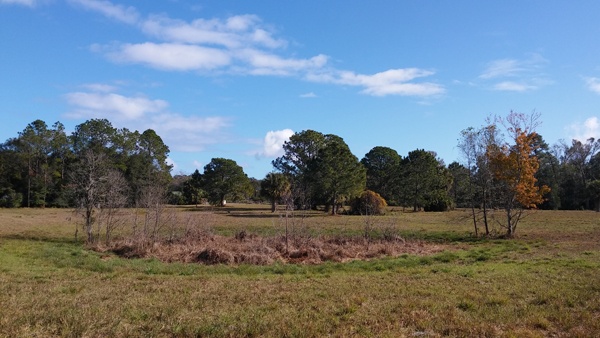 While growing up in Orlando, he told me about attending the Ninja Turtles Animators Convention at the Orlando Science Center in 1991. While being enamored to meet the animators and gazing at the original drawings, he remembers “Just the Way You Are” by Billy Joel playing. He describes the song as the, “juicy, floating feeling of the keys, the vocals with their amazing ghostly reverb ramp up to the initial verse as if being washed down to shore, and of course the undeniably sobering saxophone solo that cuts through the mist of ethereal noises and offers solid footing for the floating head.” From an early age, he continued to experience the mingling of visual and sound, so that at this point, he views the art between them as one. Kamm seems to take anything that contributes to his landscape of sound or sight, and he translates the two into their own compressed form of communication.

We talked about inspiration, which can often feel like a convoluted, self-jack of a word. He shared that he’s inspired by beautiful and tragic things saying, “The longer I create and continue to move forward, I find the less I try and just do. I change with the work and vice versa.” Kamm seems to not only listen to his internal monologue and put himself out there, but to also take into account the voice of the work itself. He said that while he’s not necessarily looking for inspiration anymore, he finds it along the way through random moments in life like a dog stumbling into his carport and hanging out there for a couple days or with a paintbrush that he made himself. 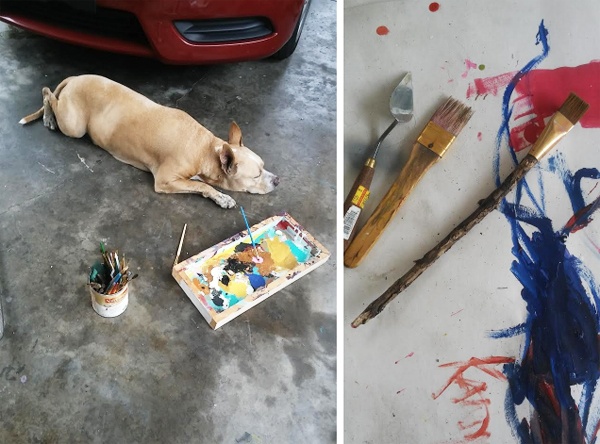 “Amateurs look for inspiration, the rest of us just get up and go to work.”
–Chuck Close

When asked how his work developed over the years, he mentioned how he sees himself taking what he shows the world more seriously. He is more considerate with what he brings to the table and offers to the masses, saying, “You can’t serve undercooked chicken or you’ll make everyone sick.”

As an individual, another element I admire about Matt is his fierce loyalty to his wife and son. In our discussion regarding his art these days, I asked him how his family has affected his work. He responded with the following:

“Having a family of my own has affected my art in many ways, but mostly in why I am creating and what for. Christina and Jude have offered me a solid footing. I used to create with reckless abandon. I would create almost hopelessly with no purpose on purpose resulting in gross product. Now, I would like to leave behind a memoir of my own life experience and perspective on the world that my son can look at to truly get to know me in ways that are not as apparent as a human being eating food next to you or paying bills in the same room.

All of us have deeper desires and dreams for the world and our communities and often it’s not as simple as being able to communicate them verbally. With sonic and visual exploration, we create modes of deeper understanding that may resonate beyond the surface of skin and bone. We leave tangible proof that we experienced this together, attempting to shape the realities that bind us. Even if that reality is just a beautiful image that may not have a purpose other than to be beautiful and exist.

That being said, art doesn’t need to equate to some wildly esoteric and mystical meaning. There’s definitely beauty in paying bills in the same room as another person. I once wrote a song about how a debt collector called my brother-in-law and he told them I was dead. As well, I have written a song about the common experience of forgetting someone’s name repeatedly and the process of attempting to figure it out without letting them know. Everything is fair game.” 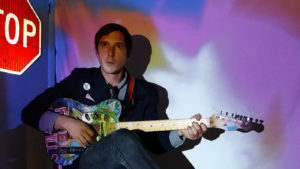 For more insight into his visual work, visit www.theworksoftele.com, as he continues to expand on his archive.