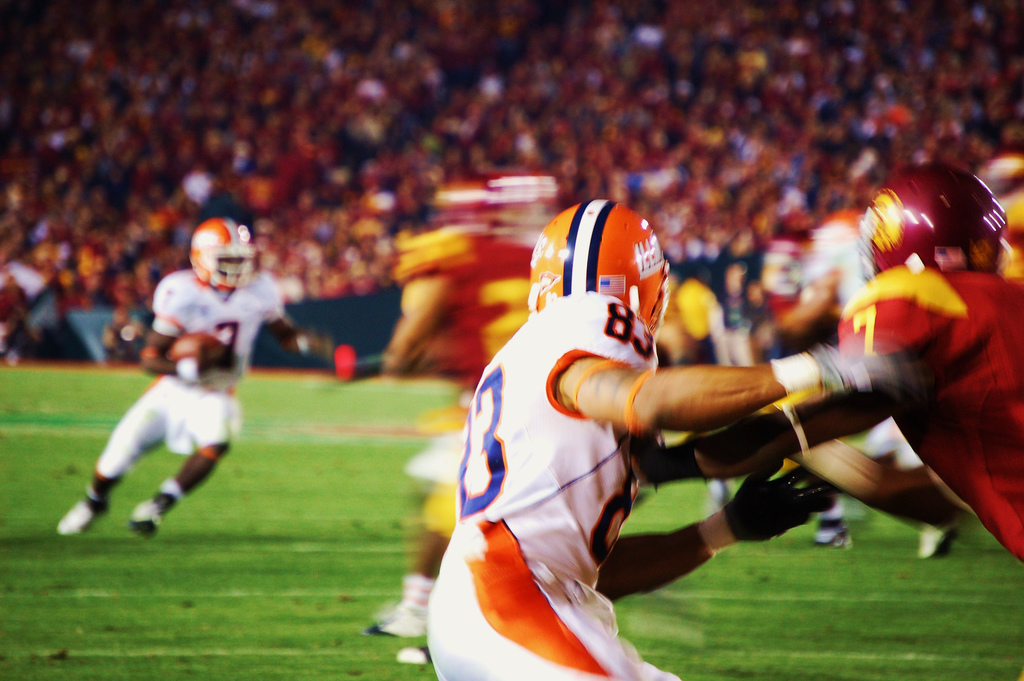 Pasadena, California. The Heisman winner stands in the tunnel looking out. He is big for a tailback. Standing 6’1” and a shade over two hundred twenty pounds. His body is an architectural structure. Despite his towering eminence his steps are gentle, humbled.

There are rose petals falling in front of his view. Petals even deeper and richer than his jersey. Their texture is like lotion. Glints of setting sunlight catch them as they fall. In the shade the color is dark and secret, but the light that shines through them pours like milk. The flowers, as a part of the Rose Parade, have fallen all day, as would be expected. But these flowers that fall now, as he waits expectantly, the last player of his team to be introduced, are a tribute. The petals share the name of his recently deceased daughter, dead a week and buried three days.

Her death dominated national headlines. All anyone can talk about is the mental process of her father and how he will deal with this in the biggest game of his career. The alleged murderer is the new boyfriend of the girl’s mother. Or, perhaps, he was. A man who in his own right was a talented football player in high school, and who was a noted physical specimen himself, but not the architectural structure that broods in the quiet of national sorrow, not quite the consummate picture of raw athleticism that is, now was, the father. In a fit of frustration, possibly induced by alcohol or illegal substances, he suffocated the crying and sleepless child with a pillow. The silence had washed like instant relief and it wasn’t until the next morning that the cold and rigid body was rushed to the hospital and pronounced dead.

The crowd is jubilant at the sight of him. He crosses the threshold of petals that now fall like rain. Then, when the fans near the tunnel see him, they overturn boxes of red on him, petals swirling in the wind and motion like a driven snow and he can feel that some of the petals are fake and some of them are real. A few lodge in his helmet, pads and uniform and it won’t be until the first carry of the game after he is tackled that a plume of these petals bursts out of him causing its own auditory awe from the crowd. His figure crosses the shadow and into the light. The crowd redoubles its explosion. The sound is unlike anything, like the voice of a human soul. He weeps and bows. The jog out to his team is slow and processional. On TVs around America the announcers and commentators are mute letting the scene speak on its own. The dominant sound on the radio is that of the band.

The toss is called by the visiting team, blue and maize, American royalty. They win the toss and defer. All season long the coach has deferred for the second half. But now Audience feels a slight sympathy in the deferment. The Heisman winner is meant to have the ball. Hidden in the routine and strategy of the coach is an olive branch. It is destiny. The whole nation cannot help but feel it. The tragedy must be confronted on the screen with everybody watching.

Handshakes are exchanged and a gleeful audience catches a quick wish of good luck spoken by the Heisman winner to his counterpart. The players adjourn to their respective sidelines. Animated bobbing, jumping, warlike cries of madness and aggression. For the rest of them, it is still a game. The over two hundred other players and coaches can hide on national television. It is the most private place in the world. They can shout like ancients angry at the sun in fury and yet they are only part of the scenery, the same as the San Gabriel Mountains over the bowl’s lip or the Trojan cheerleaders in uniforms whiter and purer than the clouds, or the photographers aligning, crowding and indeed encroaching the sidelines with shutters chopping like a calm and lapping ocean.

A rhythm takes over. There is silence. Television has gone to commercial. The crowd no longer moves as one but has broken down to its individual components. Each with her own problem and fear. Each with her own amnesia to all others around. Commercials allow for re-absorption of the Self. The Heisman winner is in a circle with the fellow running backs and the team chaplain. He is alone throughout. He is the only one apart. He prays to his God thanking him for the escape the game brings him from his Daily Struggle. He is thankful. He repeatedly utters the Psalm that shares his jersey number. He wants this game to last the whole night. He asks his God for this.

Television has resumed. The wire-suspended camera is racing from one end of the field to the other and then out over the crowd. “Return Team Up! Kick Return!” The crowd swells. It is becoming singular again. The players trot like prized horses onto the field. The sun is still yellow but fading to orange. Soon it will be the color of roses. There is a lightness, a ballet that sets in. Players stretch their hamstrings one last time. They jump and curl their legs in unnecessary athletic flourishes. The Heisman winner drifts farther away from all of them, alone at the goal line ready to receive. There is no difference between what his teammates are yelling and what the crowd is yelling. He offers up a final intercession. One word. Please.

A whistle blows. A single white jersey advances, now a whole line like an angry wave coming to surf. The Heisman winner takes a final deep breath in. He draws in the smell of his own sweat and heat, thick and humid. His heart is light. The ball is struck. It is caught in the air and appears flimsy. Lifeless. Like falling petals. It comes at him with a speed and anger. It’s arc is a razor in the wind. There is a fury behind it as though the kicker were angry at him and not angry at his jersey, but angry at the man himself, angry that a whole nation has received him into their arms. An anger that understands itself as an enemy and is jealous because of it. The ball descends and the Heisman winner cradles it, as he was always taught, as though he were holding an infant.

The tide crashes upon crimson rock in loud cracks. The Heisman winner glides effortlessly into the designed alley angling toward his own sideline. It takes three steps for him to be at full speed. His body is an unrelenting genius. There is no other way to describe it. Nothing that seems so effortless should look so fast. It is not just a genetic lottery he won, it appears as though he were appointed, chosen. Has anyone ever looked so natural in shoulder pads?

He realizes he won’t make the corner. The defender has the angle on him. He lowers his shoulder, but it is not all one movement. Hips and knees sink. Strides shorten and quicken. Keep the arms going from cheek to cheek until the last moment before the hit when the ball will be tucked against the chest. His thighs are churning and before the defender is on him he can feel the hit, feel the hurt. One has to move the body very rapidly to avoid the pain of the hit. He will have to run through the tackler as though the tackler is wind, nothing but thick air the consistency of thin, runny butter, as though the tackler‘s hit means nothing. The legs will pump fast to the point that they are numb to their own anaerobic pain. Everything is quiet, the motion seems to bring this about. The uplifting cheers of the crowd that escorted him out of the tunnel can’t bring him the fire he needs now to cut through the defender like the wind. The fast-twitch muscles that allowed him to dominate SportsCenter this Fall are worn thin like a threadbare carpet and the hit will take place without him able to spring at the last moment, to vanish out of his body as he’s been known to do. The two players are like missiles, coated in their armor. Their eyes meet for a brief moment, whites visible, and it is nothing but war between the two; anger that is an ancient mechanism in every man. The will not nearly to survive, but the will to dominate.

This accelerated adagio, this kinetic motion, the raw display of power is a testament to the absolute control of his body. Beyond the grass, his control is like rain on the Mojave. Every grain of sand standing for a single sin. One for when he missed her first steps so he could study extra film. A handful here for the times his phone rang mutely with the name of her mother. A large cracked boulder for the time his fist dug into the drywall after being told “it was over.” A shovel full of the earth for that which he would not lay on her coffin.

The two will collide and the plastic will choke and the air in their lungs will be gasped in hot helplessness. The plume of roses will soar out of the Heisman winner’s back collar, slightly damp from his sweat and the color of blood. The crowd will roar at the first draw as the two warriors’ momentum carries them together out of bounds. The hit brings a kind of quiet, something buried in the earth. The Heisman winner will rise up and time will slow. And then the roar returns, the roar that tries so hard to make him forget, yet does everything but. The crowd’s yell wants to cancel out the entirety of the Universe. It swallows up everything around it.

But it can’t take away the feeling of loss. It is its own hurt. Pain doesn’t allow itself to be buried, nor the souls of the dead. They live inside our skulls, they are borne into our hearts. To exist feels as though an injury to every ghost without a body. Sharp shooting pain that throbs in no place the body can locate. The body that everybody calls genius. The pain resonates in ghostly voices of joy, children playing, child laughing. All else is silence.

His feet are light. Are gentle. He does not wish to hurt the ground.