An excerpt from The Persistence of Rivers 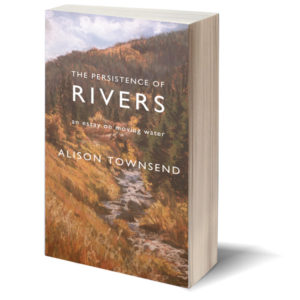 I. The Wisconsin River, Mazomanie, Wisconsin

I’m sitting on the front porch of a cabin on the banks of the Wisconsin River, watching the morning hours slide past on the river’s silver back. The river is somehow still and moving at the same time, as wide rivers often appear to be, its surface reflecting a blurred picture of trees, sandy islands, and sky that, if I stare at them all long enough, become a dream the river is having about itself. What is it like to reflect things that way, I wonder, one element of this world showing others to themselves? I read a book once in which the author posited that water possesses consciousness. This morning, staring early into river light, it is easy to believe the river is aware. It glimmers back at me through the mist, illuminating everything the way memory sometimes does—the present infused by the past—as if from down a long blue corridor where we suddenly recognize ourselves. “Sometimes there are rivers,” I wrote many years ago to a man I once loved, “that tell you who you are.” I was writing about a tangled stream that rushed out of Big Santa Anita Canyon in the San Gabriel Mountains, as different a channel of water from this placid-looking river as you can imagine. And yet it too reflected the landscape around it. It too dreamed.

The best thing about the cabin where I now sit, watching the river, is the fact that, in the impromptu, hodge-podge manner of cabins everywhere, the bed is on the front porch. Because of this, the river is the first thing you see in the morning and the last thing you see before you go to sleep. Even during the night, when I wake up, I can see it out there, sliding silently by on its watery business, shining with the dull glow of old silver, reflecting clouds, stars, moonlight. I love being able to sit up in bed in the morning with my journal, a mug of tea, and three pillows at my back, watching the river to see what it has to say, a landscape of possibility opening before me.

I have a friend who grew up along this river, and I’ve found myself thinking of her while I’ve been here, imagining her as a girl on the banks of these waters. Though I was raised in landscapes where mountains—or at least hills—served as the primary physical and emotional frames of reference, I can see how living beside a river such as this would imprint one with both stillness and fluidity, the ability to be in motion and to be both calm and aware of being in motion at the same time. Although the Wisconsin is different—and bigger than—rivers I have known well, watching it takes me back to my own origins in water. I think of rivers that began me, like the Perkiomen in eastern Pennsylvania, rivers that raised me and helped me endure, like the Titicus in rural New York State, rivers that healed me, giving me back to myself, like the Marys River in western Oregon, and finally, rivers that have taught me something I didn’t know about myself, such as the Yahara in Wisconsin.

I think of larger rivers too. The Schuylkill River defined my early girlhood, marking the way in from the country to my grandmother’s house in Philadelphia, single sculls skimming across its surface like birds, exactly like the print of a Thomas Eakins painting that hung in our living room. I think of the Hudson, which my family crossed over on the Tappan Zee Bridge as if it were the River Styx, moving to New York State at the beginning of the end of my mother’s life. I think of the Rogue in western Oregon, where I hiked along wild and precipitous banks in my early thirties, still fragile from a nervous breakdown and weeping at the sight of salmon as they leapt again and again up the waterfall, their battered silver bodies driven by instinct to return, against all obstacles, to the home stream. To have seen such a thing even once is to have stood in the presence of miracles, filled with what, in a book my aunt gave me after my mother died, Rachel Carson so aptly describes as “a sense of wonder.”

Just listing the names of the rivers, large and small, I have known or spent time beside, I realize that, though I think of myself as a “mountains and ocean” person, my life has, in fact, been laced through by rivers, as surely as if I had been born with their courses inscribed in my palm. Large and small, they have defined me in the same way they define a landscape, cutting through it, changing it, determining what happens on its shores. An American Studies major in college, I once spent an entire semester studying the role rivers played in the settlement of this country. But I had not thought about what rivers might mean on a personal level, or about what those intimate lanes of water some might call creeks or streams had to tell me about how we come to be who we are. It is as if their bright music was so much a part of my life that I hardly even heard it unless I stopped to listen. But even now, walking beside a creek or stream, I stop and incline my head, as if hearing a familiar language in its swirls, splashes, and riffles. If I just listen hard enough, I think to myself, it will tell me how to live in this world. But of course I never understand its message completely.

•
Read a Q&A with Alison Townsend