An interview with Moriah Russo, co-creator of Agencies, on the eve of Orlando Zine Fest 2016.

If you’re bookish enough to have attended the American Library Association’s annual conference in Orlando this past June, you might have seen, among the booths of big-five publishers and university presses, a display of Orlando-based zines. Between the exposure at ALA and a high-profile story of the zine community in a recent issue Orlando Weekly, this moment has inspired local zinsters and set the stage for a reprise of last year’s inaugural Orlando Zine Fest.

Zine making is usually a passion project, and it’s not always easy to find zines in bookstores, which can make it hard to engage and discover all that zines have to offer. Enter, Zine Fest.

This year, the Orlando zine community has gone all out, with a 3-day celebration that starts today at the downtown library with a zine-making workshop, hurtles into Saturday at Will’s (dirty laundry) for the Fest proper, and ends in (I’m assuming in a bit of a stagger) at the Grandma Party Bazaar on Sunday.

The following is an interview with Moriah Russo, co-creator of the zine / recurring art show called Agencies, though it should be noted that Orlando Zine Fest is made possible by a horizontally organized group of about 15 zinesters. You can find the names of (and links to) all the zines participating in this year’s Fest at the end of the interview. 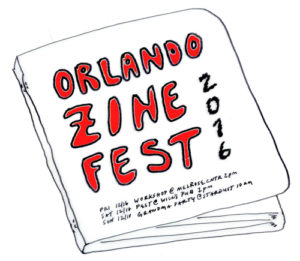 Ryan Rivas: How did you get involved in Orlando’s zine community?

Moriah Russo: Without dedicated shelf space and reading programs for zines in bookstores—or, in Orlando’s case, without bookstores—it’s really hard to know of or meet people who make zines. For years, my exposure to local zines was sporadic. Years ago, Russel Kramer created a zine called O with drawings, photographs, and poems by friends, and I contributed a poem. He was the first person I knew to gather creative work from my community in zine form. Is It Over Yet?, for a few years, hosted zine release parties with readings and performances by local bands, friends commemorated The Space (our de facto and regrettably defunct DIY venue) in an anthology, and artist friends sometimes organized their works into booklets. But, it wasn’t until I started making zines with Agencies and participated in last year’s zine fest that I really could comprehend the size and structure of the community here. That’s part of why zine fests are so important. Everyone does something you might not know about. Does that sound creepy? I mean it sweetly.

RR: How does Orlando’s zine community compare or contrast to other communities?

MR: Orlando’s zine community is centered around a value of direct action and a do-it-yourself or -together ethos. It’s probably safe to say that most, if not all, zine communities share this quality. Common characteristics like creative expression, celebratory fandom, and an interest in the unrestricted spread of information and ideas have fellowship with plenty of other communities of thinkers and doers like, for example, artists, lit lovers, sci-fi fans and hobbyists, to name a few. Zine communities aren’t centered around profit and tend to represent resistances to societal norms. This separates the zine community from mainstream/capitalist culture in a lot of significant ways. Region to region, zine communities can differ greatly. Zine communities in other places—particularly in larger cities—can be more political than Orlando’s scene—more staunchly socialist, feminist, or anarchist.

RR: How has Zine Fest (and zine culture) in Orlando changed over time?

MR: I’ve noticed that more personal zines have emerged on the Orlando scene over time, especially those made by women. In the past, our zine culture was skewed white/male/punk and the Zine Fest reflected that. But, overall, there are more and more zines of all kinds (DIY, poetry, photography, artist and musician profiles, etc.) coming out of Orlando all the time.

RR: Agencies is a great example of this. Can you talk about your work on this project?

Agencies features work by trans and cis women as well as non-binary folks. It’s a combination lit/visual arts exhibit and zine on view and published semiannually. Samantha Stribling and I work together on just about everything. We are co-organizers. I share responsibilities with outreach, event planning, curation, writing, editing, graphic design, and lots of other stuff. We created a DIY ‘in-between zine’ for Zine Fest this year called Organize an Art Show. It’s not associated with an exhibit as our other issues have been and also, in contrast to our regular issues, the zine is solely our creative work and not the collected works of many artists around a theme.

We really wanted to reach new audiences and readerships, hence the 3-day, multiple-location model, with events downtown and around Mills/50 and Audubon park. Most significant to me is the shift in organizational structure and diversity of participants. Though there will be roughly the same amount of zines represented, only a handful are repeats of those represented last year. Beyond that, we’re transmitting a live radio zine reading on WPRK with ten zine writers and poets—a change from last year’s zine fest, which went the route of live bands over broadcast.

[Editor’s call to action: tune in to, or stream online, WPRK 91.5FM on Saturday for readings from: The Archive of Scarcity, Days on End, exorcising your internalized butchphobia, some exercises, Girl Pop, Interview Before the Third, Phosphene Girl, Pomegranate Press, The Sensory Times, Snack Spells, and various materials].

RR: Why is a Fest like this important to both zinsters and readers?

MR: Broadly speaking, Zine Fest is an opportunity for zinesters to meet other zine-makers and to engage with their readerships. Zine readers tend to not only be readers of one zine, but appreciators of zines in general.

Regardless of the content, there is an underlying appreciation of the zine as a method of communication and community-building among all zine readers.

Typically, people who make zines do their work at home and as secondary or even tertiary projects to their main occupations. At zine fests, makers get to represent their work in the daylight sometimes for the only time in an entire year. Maybe their zines sit on shelves at bookstores, music shops, or sometimes even libraries, but rarely do artists and writers have the opportunity to hand off their work to a reader.