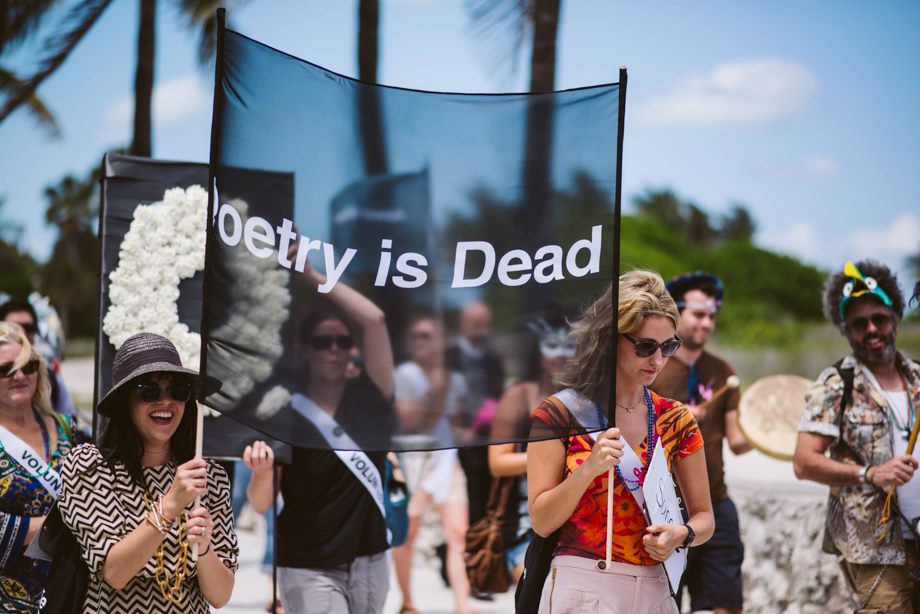 An Interview with P. Scott Cunningham

Lynne Barrett talks to P. Scott Cunningham on the eve of O, Miami 2016.

In the five years since the first O, Miami Poetry Festival, Founder and Director P. Scott Cunningham has made April in Miami synonymous with poetry, and poetry synonymous with discovery and fun. O, Miami today is a Knight Foundation-funded organization that runs year-round programs like a visiting poet series, Sunroom Poetry in Communities which brings poetry instruction to elementary schools, and the publication of Jai-Alai Magazine and books from Jai-Alai Press. For the festival, Cunningham, a poet and a graduate of the MFA program in creative writing at Florida International University, has developed a crowd-sourcing model to bring about a diverse and inventive set of ways to reach often-missed audiences and to cover the territory. This year there will be 41 events and 26 projects, making poetry pop all over Miami-Dade County. I interviewed Cunningham on the eve of the launch of this year’s O, Miami.

Lynne Barrett: What was the spark that led you to the idea of the first O, Miami in April 2011? Why Miami, and why all of Miami-Dade County?

P. Scott Cunningham: I was already producing literary events in Miami when Knight Foundation asked us if we would like to create a poetry festival, and if so, what would it look like? We started with a two-day, very academic model, but then we looked at it and realized, “About 75 people will come to this.” Which was fine, but it wasn’t what Knight was asking for. They wanted something that would expand the audience for the genre. So then we said, “What’s the opposite of that two-day model?” And then it happened really fast: let’s reach everyone in Greater Miami, and let’s give ourselves a whole month to do it.

LB: Up until then, how would you say Miamians generally interacted with poetry, and where?

PSC: There’s a long history of poetry in Miami, so there’s no way to neatly sum it up. I actually don’t think O, Miami is doing anything revolutionary; we’re just continuing the adventurous tradition that dates back to when pirates patrolled Biscayne Bay. More recently, a poet named Jeffrey Knapp did all sorts of “O, Miami-style” projects to bring poetry to more people, including putting local poems on billboards and biking to schools to do readings. But even given Miami’s penchant for flair, most poetry happens on a solitary basis. Most people read and write it alone. O, Miami provides an occasion for the genre to clear its throat a little and make some noise.

LB: What are a couple of the memorable projects from the earlier festivals that worked differently (whether better or worse) than you expected?

PSC: We did a “Poetry is Dead” parade in 2013 that was modeled on a parade that happens every year in Granada, Nicaragua. At that parade, a float containing a raised stage and a microphone drives around the city, stopping at every intersection so that poets can read a poem to the crowd. I wanted to do the same thing, but we didn’t really have the infrastructure to pull it off, and so we did a parade “lower to the ground” in a park on Miami Beach. Instead of having poets read, we got artists, students, and theatre groups to portray dead poets and bring them back to life. So while I was disappointed that I wasn’t able to recreate this thing I’d loved in Granada, I was happy that we ended up doing something that was unique to Miami.

I want people to feel free and empowered to use poetry in times of crisis and to have fun with it to deepen their experiences as humans.

LB: One aspect of the festival has been to make us aware of our written environment and how “text” we pass daily, or unthinkingly consume, may be poetry. Previous festivals have surprised us with poems in the form of street signs, as labels sewn into resale shop clothing, and on beer coasters.  Where might we find poetry in unexpected parts of our readable world as part of this year’s festival?

PSC: We partnered with Yo Amo 305 to make campaign lawn signs with excerpts from Larry Levis (1946 – 1996) on them. We partnered with Jackson Health Systems to make “poetry prescriptions” —pill bottles with rolled up poems inside. We made Fortune Cookies that will be distributed by Delivery Dudes Midtown, and an artist named Sandra March created a daily poetry newspaper that will be distributed in West Kendall.

LB: As you’ve gone forward, what are some of the challenges that remain in achieving the goal of having “every single person in Miami-Dade County encounter a poem during the month of April”?

PSC: It’s a big county! And we’re a small team with a limited number of resources. Every year we try to get more strategic and efficient, but it’s a massive challenge. I’ll say this: we fail well, and we have fun doing it.

LB: Among the places you identified this year as a focus is Opa-Locka.  Why?  What projects will be going on there?

PSC: Opa-Locka is a really beautiful, interesting, and often ignored corner of Miami-Dade. We partnered with a poet named Shameeka Thomas to create a 12-week workshop for Opa-Locka student poets that culminates in a public reading and celebration. We also created a walking tour through the neighborhood with an Iranian poet named Patrick Cox that ends with a workshop on Islamic poetry. Opa-Locka was one of three neighborhoods we targeted this year (West Kendall and Hialeah were the other two) because, based on our data, we felt we hadn’t done a good enough job of reaching those areas.

LB: The name O, Miami was chosen because it is, itself, a poem, an invocation and incantation.  One aspect of the festival is to have Miamians participate as poets themselves, this year through the zip code poetry contest, Ode to the Code, run via NPR station WLRN. Is your ultimate goal not just the encountering of poetry but everyone recognizing the poet within?

PSC: Yes, definitely. I feel strongly that once necessity dictates it, everyone is a poet. We all need language at some point to help us process our emotional lives. Poetry is the cheapest and most effective tool for doing so. I want people to feel free and empowered to use poetry in times of crisis and to have fun with it to deepen their experiences as humans.

LB: If a reader of Fantastic Floridas who lives outside of Miami were to plan a trip to Miami this month, what might be a few spots on the visitor’s itinerary to see what this is all about?

PSC: Poetry in the Park is a free, outdoor event on Miami Beach that puts a 7,000 square foot projection of the Poet Laureate of the United States on the side of the New World Symphony (Fri, April 8). Poetry Press Week in Wynwood on April 22 & 23 is going to be special. BreakBeat Poets on April 17 & 18 explores the intersection of poetry and hip hop. On April 24, we’re doing a field day in West Kendall with The New Tropic. The Zip Odes reading at The Kampong is always really fun. Then we end the month at the Little Haiti Cultural Center with a performance by the Dark Noise Collective.

The full schedule for O, Miami 2016 and detailed information on programs and events can be downloaded from their website.