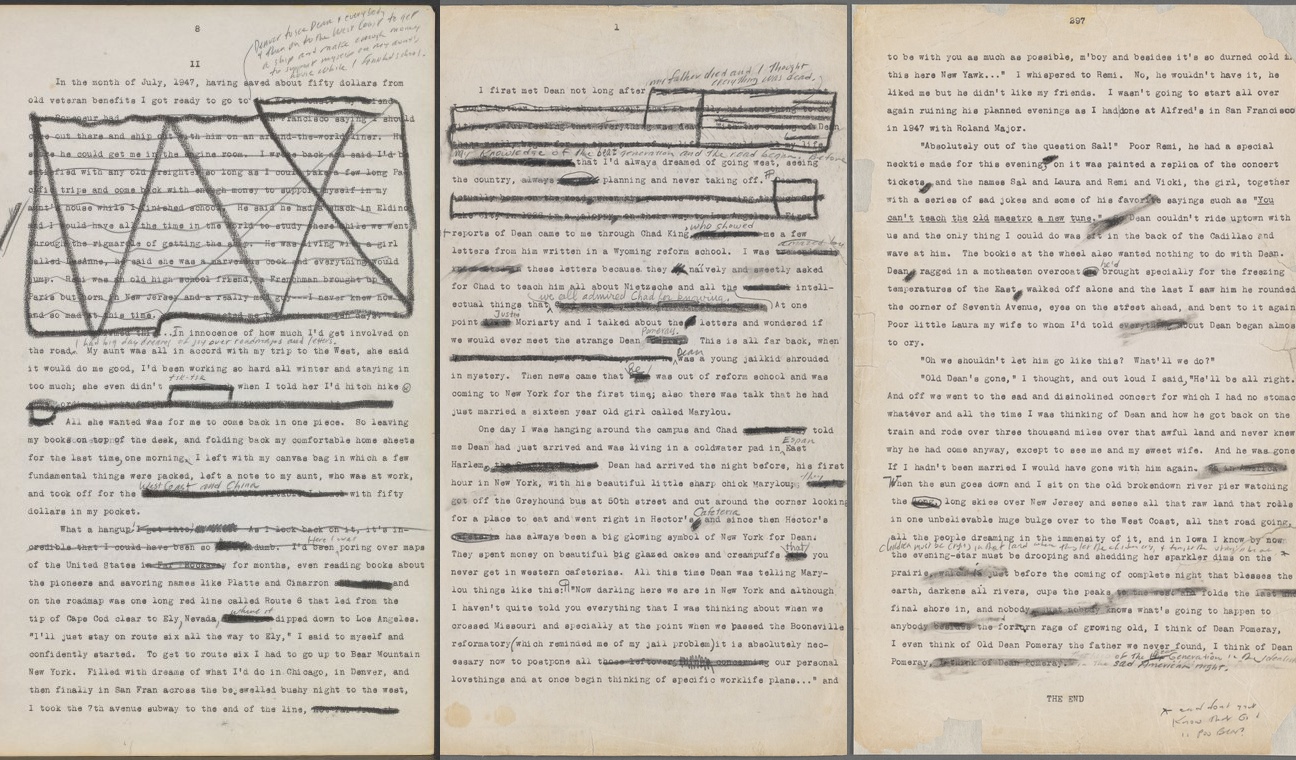 Memories of the Road: Celebrating the 60th Anniversary of On The Road by Jack Kerouac

Joshua Dull
A note for locals: Those living in and around Orlando should catch the current Kerouac House writer in residence, Suleika Jaouad, give her farewell reading this weekend.

Late evening in College Park, outside Downtown Orlando, sixty years after Jack Kerouac’s generation-defining opus On the Road reached critical acclaim, cicadas trilled in ancient trees teased by winds from Hurricane Irma. Gunmetal grey clouds crowded the sky. The storm was within a few days of landfall in Orlando, yet its wind and clouds did nothing to quell the sweaty heat of the evening. Two jazz musicians, guitarist Chris Cortez and saxophonist Mark Piszczek, set up beneath a blue tent. Audio guru and writer Jared Silvia finessed his sound equipment as they tuned their instruments. Writers, artists, and others mingled on the lawn, among them Bob Kealing, author of Kerouac in Florida: Where the Road Ends. He stood in a tan blazer, reminiscing on how far the Kerouac Project had come since he had first found the house, when it was a “ramshackle dump” with rats hanging from traps in the eaves.

Cars whispered by on Shady Lane. The audience filled the thin metal chairs set up on the lawn, where Jack once lay to stare at the stars and the passing Sputnik satellite. John King of The Drunken Odyssey podcast addressed them among the chorus of cicadas and the jazz ensemble’s opening notes.

The first reader, Tod Caviness, read from the beginning of Jack’s odyssey. His voice echoed throughout the streets with familiar lines and characters, like Dean Moriarty and Carlo Marx. Cortez and Piszczek supplied the music Jack loved, complementing his words and the humid, tropical evening, which Jack knew well in his time living here. Streetlights flickered to life overhead. The low, muggy heat drew sweat from several faces in the audience. An amber glow came from the windows of the house where Jack once sat in his chair, drinking, when a New York Times critic dubbed him the “voice of a new generation.”

The Kerouac Board President, Janna Benge, took the stage next, the sun having fully set. She carried the audience further into chapter one and the night Dean Moriarty met Carlo Marx: “The holy con-man with the shining eyes and the sorrowful poetic con-man with the dark mind.” More silhouettes gathered on the lawn. Guitar notes punctuated the lines as Sal expressed his desire for people who “burn burn burn like fabulous yellow Roman Candles exploding like spiders across the stars.” Janna paused. The audience clapped, the power of the line setting in. Janna finished where Jack’s road adventure began.

Erik Deckers followed Janna, his tall bulky frame sporting a fedora. He found it fitting that Tod and Janna had introduced Dean Moriarty, as Deckers personally hated him. He found Moriarty’s conversations with Marx “pseudo-intellectual,” yet the passage where Sal, Dean, and Carlo were in Denver deep into one of these conversations stuck with Erik for decades. Crickets replaced the sounds of cicadas. The porch light reflected off the rim of Erik’s glasses. He illustrated Carlo and Dean’s complex circular conversations that carried “on and on into the night, they talked like this until I thought I would lose my mind.” The audience laughed at the ad-libbed line, which mirrored Sal’s desire to “Stop the machine,” or end the conversation. Erik stepped from the stage, his form passing through the crowd of standing spectators.

John approached the stage and welcomed Bob Kealing, who recounted his memories of researching the house when learning about Jack Kerouac’s past in Orlando. When he spoke to the people who lived there in the spring of 1996, the back door was wide open, squirrels running in and out. He asked himself, “what the hell have I gotten myself into?” and he believed this site has since become a miracle. Bob spoke of how making this house into a historical site was a drop in the pond of both Orlando history and culture. Those ripples still reach from that drop today, with the house hosting its sixty-fourth writer in residence, who sat smiling and nodding her head, one of 350 applicants from 29 countries that year. Kerouac could have only imagined such a worldwide impact when he lay dreaming in the orange grove that once grew behind the house.

The alto sax and guitar sifted into John and Bob’s banter. They spoke of the milieu surrounding On the Road, how the drugs, sex parties, and depravity of the characters grated against the pristine façade of “I Like Ike”-era America. It was solely a fluke that propelled On the Road into a generation-defining work and Jack into sudden and monumental fame, when the New York Times’ head book reviewer was out and assistant Gilbert Millstein read it first and wrote a roaring review. Jack became a media darling, yet that sudden and constant fame weighed on Jack. John informed the audience that inside the house, in the back half Jack occupied, was the chair he “drank himself to death in.”

“Well that’s a buzzkill for the evening,” Bob said.

John ends his podcast by telling listeners not to “swallow the worm,” or find the end of the bottle.

Bob agreed – follow Jack’s work ethic, not so much his substance abuse, as he died very young from liver failure. The ultimate takeaway was to value the time to write, or “ass in chair” time, which is ultimately what The Kerouac House offers its residents during their three month stay.

After a short intermission, seats began to fill again and souls gathered back around on the lawn. A full moon passed through filmy clouds. The fluttering notes of the alto sax welcomed the audience back for the second set of the night. The final notes of Straight, No Chaser settled down to audience applause. John brought the current Kerouac House resident Suleika Jaouad to the stage. She had arrived only the Friday before and found the house spacious compared to her apartment in New York’s East Village, a place Jack haunted during his time in the big city. She spoke of how On the Road inspired her to write her first nonfiction piece in middle school, which got her into trouble. She planned to use her time at the Kerouac House to finish her memoir about the 15,000 mile road trip she took after a long and serious illness. The story encapsulates everyone she met along the way and the healing that took place, that journey ending at the Kerouac House. She hopes to write the final lines of that book in the place where Jack’s own road adventure ended.

Karen Price came to the stage afterward. Floral curtains glowed from the lamplight inside the house behind her. She took the audience to the jazz clubs of Chicago with Sal and Dean in chapter ten of book three. The spontaneous prose flowed from the pages and her lively voice, riding the jazz notes from the accompaniment. Sal and Dean’s night came alive in her reading, notes trailing to the stars like the “bassy and benny-moten bands” that inspired Jack’s prose. Here, the audience met the “children of the American bop night.”

Holly Kapherr picked up where Karen left off. Dean and Jack destroyed an old Cadillac, having “paid the price of the night.” One could hear the riveting music of George Sheering, whom Dean referred to as God. She spoke of the tune that would raise men’s souls to Heaven, how they found it and subsequently lost it. As Karen had brought the audience into the wild, explosive night of the Chicago jazz scene, Holly took them through the climax and to the end, when Dean, Sal, and all that filled the streets and bars disappeared back to their respective homes to nurse hangovers and wait for the “bop night” to return.

Bob and John re-entered the stage. They thanked the audience of writers, artists, board members past and present, all moved and inspired by Jack’s journey in On the Road. When asked what Jack would have said had he been there to witness the evening, Bob replied that he surely would have cried tears of joy. “There is no better tribute than literature, and to read it on the back porch of the very place where he struggled and finally succeeded.” With the passion latent in each reader, in John King’s oration, and Bob Kealing’s tireless endeavors, it was easy to imagine Jack’s ghost among the audience.

Jared Silvia ended the night with the last page and a half of On the Road, captivating the audience with the finality of Dean Moriarty and Jack’s parting. Sal meditated on the grandiosity of America, its endless skies and expansive lands, the roads crisscrossing through the millions of people dreaming, hoping, struggling, and living. Within all of that immensity, he “thinks of Dean Moriarty,” and we did, too, on a darkened street in College Park, Orlando.