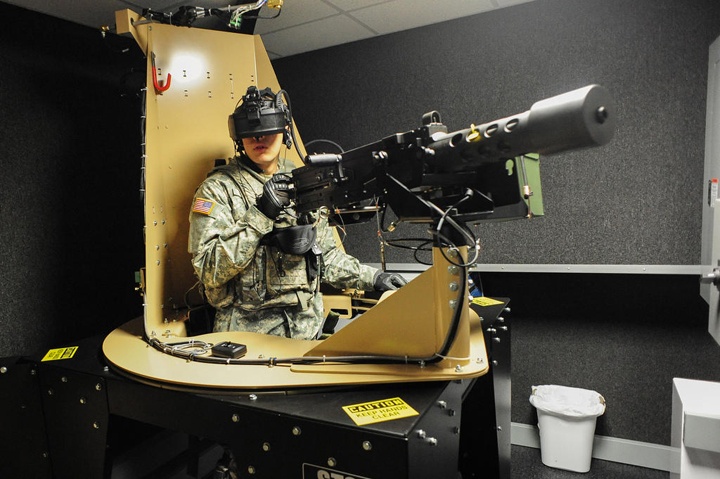 Repeating the trauma of Afghanistan is supposed to cure it. I don the state-of-the-art headset, 3 fucking D, and hold the controller. Hepatic feedback. Sit in the seat. Hepatic feedback. Humvee on a bumpy road? Not really. No way to simulate the choke of sand and smoke, but when she thinks you’re ready, the doctor adds smells—diesel, sweat, gunpowder, blood.

Let’s play. You can’t know if they’ll ever find you in this fog.

We are allowed to mow them all down. At first you try to tell the difference.

The seizure starts. Rat-a-tat. Close the door. Ever wake up sore all over, wet face?

I accuse the doc of torture and her doctor mask goes slack.

It’s not her fault, but knowing that doesn’t stem the shame or the dismay. Every seizure slays brain cells. There’s atrophy. The amygdala, I understand, if not the whole gray mass. I have a habit of tracing my finger along the divot in my skull.

Postictal rage from the seizures, she says, shrugging it off. She calls me corporal and I think of bodies.

Thousands of you young guys returning home, the doctor says, victims of IEDs.

First the blast wave hits your prefrontal cortex. Where you try to think. And then your occipital lobes slam into your brain-pan. Imagine a rough chef juggling an egg.

I breathe into the counter. The wires move like long hairs, an insect’s antennae.

I am obsessed about killing, death, war, my ailments. I am compulsive about my locks, my barricades, my weapons, my games, my disguises.

My room on an Oakland asphalt cloverleaf has a wasp nest, twin bed, drug stash, closet kitchen, pocket bath, pungent trash, and fast internet so I can play my other game at night. I draw the shades against threatening sunlight and back up the deadbolt with a pistol under the pillow. My drugs are in a lockbox, the liquor in a drawer. The desk agent fears my dented head.

At night, I don the persona of a Blood Elf and kill monsters with my online gaming friends. I am in love with the Chinese mail-order bride who plays Peachypie the Mage. The crazy guy who plays Croesus the Rogue racks up the damage per second and says if you know you’re crazy you’re not. I’d like to think he’s right.

I am a decent poet, not a hack. Yeats, Rilke, Sassoon and Owen, if you want to know the truth. Truth, goodness, beauty, war.

I can go to the bookstore if I wear my hoodie, glasses, and gloves. Mostly it’s the eyes that scare the clerks. Like tar, they suck you down.

Back at the room, the hours pass with poetry—Dante’s Opportunists run through the haze while wasps tap the ceiling above me. When it’s time to raid, my toon deals damage, but also heals guildies in danger of death. Many’s the time I’ve pulled Peachypie from the fire.

I wear the headset and listen to the chatter but never say much. These people are my only friends and I can’t lose them too.

Start and stop. Beginning and end. Rat-a-tat. Now drive. Objective ahead. You can stop anytime.

In my custom scenario, Paul, Billy, and Cameron man the Humvee ahead, the one that takes the first bomb.

Cartoon road, cartoon fog, dirt, dust, sand. I cough as if it’s real dirt, as if the war were here. Explosion, concussion, revulsion. The doctor says to rewind, give it time.

Just shoot, she says. She’s heard all the excuses.

The metal disk beneath me jerks when the bombs go off.

After this seizure, the doctor looks at me as if I am a vase of daisies. If not for that look of hers I would just stay home.

In her arsenal are diesel and burning hair. Tomorrow I understand there will be gunpowder, the next day blood.

The nighttime game and nine guildies have become my training wheels, damaged and dented, every one. Sometimes after the nightmares I go on at two or three a.m., hoping to find one insomniac loitering. There are nights when I am alone with the wasps, but when the guildies are there, we talk game stats in our geek-speak patois. Sometimes Dionysus complains about his girlfriend or one of his students. That any guy my same age has problems this banal fascinates me and gives me hope.

The doctor is my torturer, my savior. She lances memories and drains them like boils. The better to hurt me less.

I want to believe. But imagine going under the knife with no anesthesia.

She has generous, berry-colored lips. I picture attentive parents, a half dozen brothers, crowded holiday tables, a doctor-boyfriend.

I ask her what she likes about me. My forwardness the result of frying up bud for breakfast and chewing it like a grazing goat.

I like the way you keep coming, she says, even though it’s hard.

But true, she says.

Fair enough. What else?

I like your curiosity. You are articulate. Sometimes you are funny. She shrugs.

And what do you dislike?

I am afraid of your dysregulation, she says. It’s happening again now, isn’t it?

I can’t hear her because I have turned to crap.

You are making a fist, she says.

Hit this. She points to a punching bag in the corner.

But I am not fine. My cartoon hands on the cartoon steering wheel, the cartoon road dust, cartoon sky. The cartoon boy in the road.

I break the rules when I pop the Ativan and drink. And after a session some medical bud supplements the pills. My vision cranks down until I am peering through a tiny hole at America, reminding myself the war isn’t here.

Nausea, wasps buzzing, and then the seizures come, two or three a week. When I wake up, my wet face. Or in the case of the white-coated doctor, the neutrality I love, the indifferent shrug. You’d swear she cares.

My mother begs to see me but I won’t tell her where I am. After the next surgery, when the seizures abate and the tar drains from my eyes, that’s when I’ll fly home. Cactus as tall as an oak. Dad waiting by the door. This is the first time I’ve thought of going home.

And so I continue through the smell of sweat and flesh and dust and blood. Through the custom scenario, the Humvee in front full of dead friends, the mud hut, the small boy concealing the IED. The choking dust, the persistent song of larks.

That five-minute wound in the skin of time, that ulcer—it’s hard to explain how much you want to avoid a replay. It’s a game, a cartoon, but the sounds and smells are there, the vibration, your cartoon hands on the steering wheel in front of you, the windshield coated with dust, the lieutenant telling jokes in the passenger seat, static and orders on the radio, AC/DC tinny from someone’s player, gas and sweat, the dirt road, the dirty clouds, the Humvee up ahead about to be blown to bits. Bits and bytes, and sometimes you know that, but then you’re back there in your head.

The first time straight through it’s the hardest, she says. Or maybe the second. After that it gets easier.

I have to believe the doc. My faith in her, my anger, and the love I still have for my parents—are those three things enough to carry me to the shore of a new life?

The morning of that last patrol, the river, an astonishing variety of birds. My hands on the wheel in front of me. The road, the dirt, the exploding vehicle just glimpsed in front. That flying sensation when the impact throws you.

Imagine bathing in acid, letting it wet your skin, burning in. Imagine, then, submerging in it. Imagine drinking the acid, breathing it. You can’t care whether there is a chance of revival or resurrection.

One scenario: the doctor peeling off her clothes and diving in after you. She drags you to the riverbank. Your scorched body carves a rut in the mud.

Crawling out. Fragments, only. Civilian casualties, the bureaucrats say, mixed in with ours. No one but me saw the remains of the bomb-blasted child in the tree, me and that boy’s mother, looking and looking. Nothing much to find. Just scraps of what she wants—cloth, organs, bone, blood.

Outside my window the wasp nest resembles wet newspaper, a target for my chopstick pokes. Wasps an inch long and noisy, with wiry legs and antennae. Their anger astonishes even me. If only each wasp could carry some of my rage away, into the sky, into the streets, into the fields and farms. If it could spread like that into the fabric of existence, it’s possible I could go on.