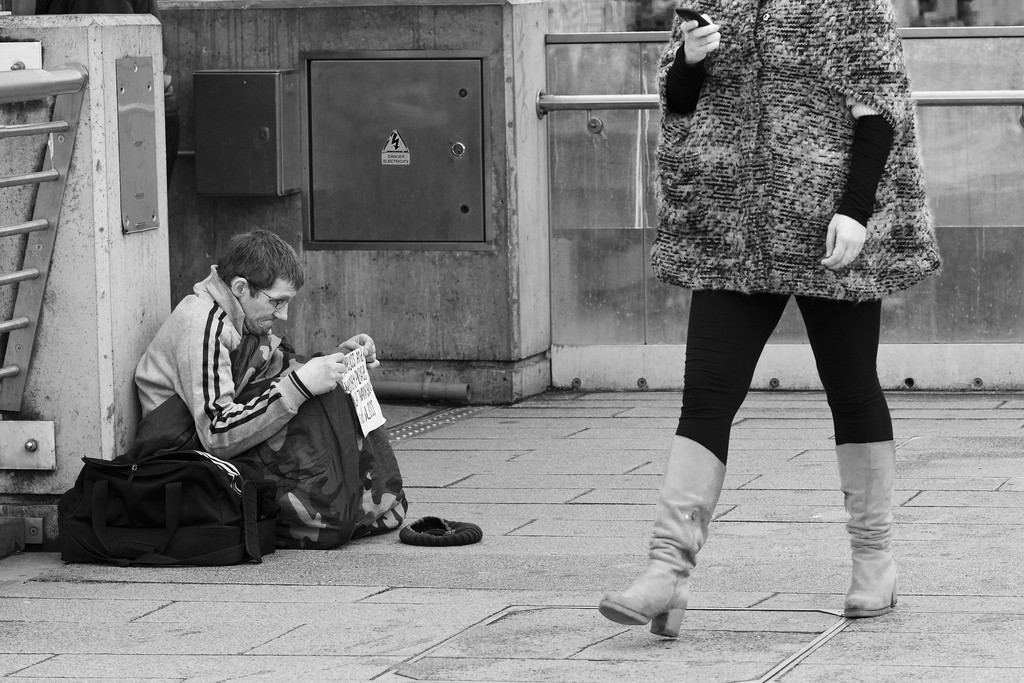 “I suicide, I suicide!” he cried out, en pointe, as if strung up by an invisible rope lashed to a rafter in the heaven of the homeless shelter. His hands collared his strangulated neck, a frill of starched fingers.

The staff rolled their eyes and cut him down again and again. “He’s just crying for help,” one yelled over to me dismissively from where she prepared sandwich triangles and tea.

“My father, he—” My new friend searched the room for the word died. He pulled his noose tight, pantomiming. Neck bent, eyes to the ceiling like one in prayer.

He nodded. “I no goodbye him.”

I consoled him as best I could. I asked around to see if there were any other Slavic language speakers. I asked the counsellor on shift what the protocol is with suicide attempts. “Don’t bother, he’s always doing that. He’ll be back tomorrow.”

Before letting the homeless inside the shelter, the manager would ask us volunteers to gather around so he could warn us of the dangers. He preached from the pulpit of his goatee, dividing the nights into us and them. I thought of Dr. Seuss’ Star-Bellied Sneetches, the haves and have-nots, us and them. Us versus them. The manager spoke as if homelessness were hereditary, as if homelessness made people inherently different from us.

“Is there a suicide hotline he can call, at least, with multilingual operators?” I asked. The counsellor scribbled a number in a huff, indignant that I’d expect her to do her job.

“I suicide!” Tears ran down the man’s handsome face.

I looked at the phone number on the Tesco receipt. It’d been written so hastily I couldn’t read it. “Is this a four or a nine?” I asked her to write it over again. “Is there a phone he can use to call the number?”

“I don’t know.” She sat back down, thwacked open the Daily Mirror and hid behind it.

“Can’t someone talk to him?” I asked the room in general.

The manager on duty smiled sagely at me and shook his head. “If we stayed late for every suicide threat we’d never go home.” He walked up to the man at the end of his rope. “We’re closing. Time to go.” He shuffled him toward the door like he was a school child.

I walked out of the building with the grieving man. I vowed to stay all night until the crying stopped and the noose gave from the rafters in his mind. I vowed to never return to that homeless shelter again.

I offered to buy him food, beer, cigarettes. He refused everything. He was newly orphaned in a foreign city. We sat down on the pavement in front of Tesco’s on Magdalen—pronounced maudlin—Street, a pedestrian bottleneck. He showed me his jailhouse tattoos, his body becoming a picture book, like Biblical stories in stained glass intended for the illiterate. Language was unnecessary. He turned the page by rolling up a sleeve.

We were knee-level to the stream of people that blurred by. Someone dropped coins in our laps. How odd, pennies falling from the sky like bird shit. Words fell, too: get a job, dirty immigrants, go home.

Each slur applied to me too, even though I lived in a posh house in Summertown and attended Oxford University. I was an immigrant, I had no job. They’d probably want me to go home too, to the United States. In the evening light, hunched down next to him in my homeless shelter clothes, I must have looked like one of them. I fought the urge to stand up, to take out my iPhone to prove my homefulness.

My husband and I had been homeless for a few months in our own country, in the States, where we spoke the language, where we’d attended privileged private schools. That was bad enough. I couldn’t imagine living on the margins of a hatred I couldn’t translate, to be a person reduced by sneers and averted eyes. Recently, the London cops made raids of the parks and confiscated homeless people’s personal effects and sleeping bags, all of which had been donated by the Salvation Army. They did this even though it was mid-winter and the homeless shelters were full. Then they went home to their families.

The man and I spoke in charades. I was accustomed to this pidgin sign language, having lived in Japan and Germany, having been orphaned in many foreign cities myself. Our hands and facial expressions communicated where language left off, his broken English smashed to bits in the alley. He was still fuming from earlier. I was fuming from earlier. We wanted blood.

When we ran out of tattoos and bad English we walked around and found ourselves in the dark alley that leads to the Madding Crowd pub. He showed me places on the body that cause instant death. He pointed to a man walking by. “He hurt you?” Then pointed to another. “He hurt you?” His Slavic accent shivved the corners of the word hurt. He showed me what he would do to men who tried to hurt me. He killed them instantly from across the street.

Volunteers shouldn’t hang out with the customers I told myself. Not at night. Not in alleyways. I hoped his anger would bypass me and kill other people who didn’t seem to notice anyway.

He buckled me in a headlock. He showed me everything he could do with a person in this position. Then he spun me, hoisted me, felled me. But gently.

“Wow!” I said again and again. “Cool!” He was a badass. My mouth tasted of adrenaline but I swallowed it back. I imagined my body bruised with tattoos left by his hands, imagined what my husband would say later on when I took off my clothes. I should have been terrified but it was fun riding the rollercoaster of the man’s body, not knowing where he’d throw me or where I’d land. He spun me around wildly, blindly, as if the attacks had been choreographed. There’s not much difference between fighting and making love—and the intimacy fascinated me. I wanted to be a badass like him, or to be a lover the way he was a badass, unapologetically, naturally, as if my beloved and I were one body.

I was a little alarmed that no one stopped to help a woman being attacked in an alleyway, but I was relieved, too. No one would understand that he was rescuing me.

“I show you how,” he said. He slid his thumb into my mouth and pressed my palate—a death move that tasted of urine. I could taste the salt after he took his thumb out from my lips.

I had cut his invisible rope and he had killed my attacker in a dark corner of my mouth. We had saved each other.

That night my Polish friend killed about twenty people who posed a threat to me and killed me again and again to show me how to avoid death.

Hours later we sang Sweet Child o’ Mine on the steps of the Martyrs’ Memorial as an elegy, our arms around each others’ shoulders. He sang the words all wrong but his tears were spot on. I wondered what he was singing, what his words meant, if he was singing to his dead father.

The homeless have been called many names through the ages: knaves and whoresons, bugbears, miscreants, sons-of-bitches, buggers, beggars, gits, nutters.

The city is filled with beggar-saints. They’ve always been chivalric heroes to me and my daughters; I can count five off the top of my head who would fight to defend our honour. I know which streets they sit on and when. I know how to find them. We know them by name and exchange embraces. For a moment, mid-embrace, I feel people’s eyes burn into my bent back. For that moment I’m classified as one of them. People don’t like the blurring of lines and demarcations. If I reach a hand across that line, I’m one of them.

I think of Oliver. I think of Les Miserables. Misery tarted up for our entertainment. I think of Shakespeare:

Fie, fie! unknit that threatening unkind brow,
And dart not scornful glances from those eyes.

It’s true what they say about having nothing to lose; the homeless know they’re going to die. My friend walks the streets with a rope cinched in a circle just above his head like a halo. Others have weapons tattooed on them: a sacré-coeur on the chest, a knife on the forearm. They make cups with their hands for change, a hand-to-mouth existence. Then they turn their hands on themselves—a bottle of alcohol, a needle. Most don’t give warning like my friend did. They just warm themselves with cheap Skol Super on a winter’s night and burn to death in the bushes of University Parks. There is god here, in the burn, in the bush. This is where god takes his orphans back.

It grew late and my family was waiting for me. I felt guilty for leaving him alone, of course, but I could feel the coil of his noose around my arm like a snake. I’d stolen it from him bit by bit, on the sly, inch by invisible inch. It seemed safe to go back to my family and leave him alone. He walked back to his shared one-man tent in an alley by the L.A. Fitness. I could still taste his thumb on my tongue when I got home, and I rolled it around my mouth as I killed his enemies with my thoughts, all the way from the north end of Banbury Road.