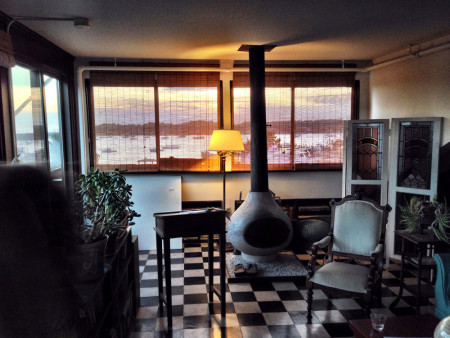 The first time I reached into the mailbox and pulled out a pile of mail addressed to Jack Kerouac, I wondered if the Thunderbird Wine was playing morning-after tricks on me. I had arrived the previous night at the Kerouac House in Orlando, FL, to stay for three months on a Writer-In-Residence fellowship. After putting down my suitcase in Kerouac’s former bedroom, I’d entered the kitchen to find a bottle of Thunderbird. Next to it, a note from the previous Writer-In-Residence: Jack’s favorite. It didn’t take more than a single glass of Jack’s beloved high-octane cheap red wine, mixed with the heady buzz of his presence in the tiny tin-roofed house, to make me feel intoxicated by my new surroundings.

When I decided to take time off from teaching to focus on my first book of poetry, I found myself hungry to make contact with the actual lives – the spaces, the objects, the breathed air – of authors who had forged lasting work. After researching writers’ houses around the country, I discovered that many of them, usually maintained by literary donors and village improvement societies, host Writer-In-Residence programs. If selected for a residency position at one of the houses, I would have the opportunity to occupy the place, supported by a fellowship stipend, while working on my manuscript. My mind orbited around the possibility of absorbing influences not only from a writer’s words but also from the very rooms in which he or she had wrestled with those words.

I set about applying in the hope that my work would resonate with the application committee at one of the houses. The Carson McCullers House in Georgia. The Carl Sandburg Home in North Carolina. The Thurber House in Ohio. When I ended up receiving two acceptances, first from the Jack Kerouac House, and later from the James Merrill House in Stonington, CT, my surprise and excitement were intensified by my fascination with the contrast between the writers.

Jack Kerouac, the working-class Beat writer from Lowell Massachusetts known for the wildness of both his lifestyle and his writing style. James Merrill, the privileged heir of the Merrill-Lynch fortune noted for the rarified formal virtuosity of his poetry. How would the different energies swirling in Kerouac’s one-floor Florida bungalow and Merrill’s expansive New England Victorian impact my senses?

When I arrived at the James Merrill House, there was no bottle of Thunderbird awaiting me. After a glance around the place, it occurred to me that Merrill had probably never taken a sip of Thunderbird in his entire life. As a poet in the early stages, I related more to the economic realities embodied in Kerouac’s tight living space (when Kerouac moved into the Orlando bungalow, where he lived with his mother, he was a broke, young, unknown writer). But Merrill’s poetry had always reverberated with me in a stronger way than Kerouac’s work. Though I’d relished “On The Road” and “Dharma Bums” in my late teens, his novels weren’t among the works that I carried closest to my core. Merrill’s poetry, on the other hand, had made an echoing claim on my ears and imagination from the very first time I encountered it in college.

Before landing at the two houses, I’d been on a path not uncommon among young writers today, moving between short-term fellowships, artists’ colonies, teaching posts, and other temporary work. A nomadism not nearly as full of mythos as Jack’s adventures on the road, but equally shot through with financial uncertainties. If Kerouac’s sparsely furnished two-bedroom bungalow felt more like home to me than Merrill’s extravagantly decorated three-story abode, Merrill’s place seemed to promise something different than a sense of belonging: there I could enter in an intimate and tangible way the atmosphere of a poet whose work, I sensed, could push my own past its familiar edges.

Emptying the Kerouac House mailbox that first morning, I expected to find late-arriving letters for the previous Writer-In-Residence. When I discovered that the envelopes were addressed to Kerouac himself, a sense of unreality seized me. Coupon books, solicitations, and catalogs – common junk mail that fills the boxes of the living on a daily basis. The odd immediacy of Kerouac receiving such mail seemed to both deny and emphasize the fact that he’d been dead for over forty years. Later that day, the house phone rang:

“Is Jack Kerouac there?”

Speechless at first, I assumed that there must be a prank caller on the other line. It turned out to be a telemarketer. The next day, another call – “Can I please speak to Mr. Kerouac?” – this time from a political campaigner. When I started to explain, the caller interrupted: “So Mr. Kerouac has had a change of address?”

The more days I spent in the Kerouac House, I discovered that to occupy Jack’s space was to feel his nearness and absence with equal acuity. Sometimes the house was just a house, full of expressionless surfaces and inanimate shapes. At other times, the place and its contents seemed to pulse with Kerouac’s essence in a way that vibrated through my writing. It was as if Jack had both undergone a “change of address” and decided never to leave.

If I’d sensed Jack’s presence only irregularly, James seemed so present in the Merrill House that it was impossible not to hold him in constant awareness. When the Stonington Village Improvement Society transformed the building’s third floor into the residency program, they chose to leave the famously eclectic décor and contents of Merrill’s world exactly the way he’d left them. As I entered the dining room with its domed and elaborately embossed tin ceiling  (a far cry from the Kerouac House’s tin roof), my eyes went immediately to the Ouija board.

Strangely, this Ouija board, which had never genuinely belonged to James, brought him to life for me more than anything else in the place. The board, a facsimile of the one used by Merrill and his partner David Jackson during their frequent Ouija sessions, seemed as distant from the real James Merrill as the piles of junk mail had seemed from the actual Jack Kerouac. Yet those letters addressed to Kerouac, even while accentuating his absence, had stirred me with his presence. The same paradox rippled through the Ouija board from the first moment I touched it.

Every evening, after writing all day in Merrill’s studio, I settled at the table with the board in front of me. Sitting among Merrill’s cherished furnishings, talismans, and curiosities, which he’d collected during his world travels, with photographs and paintings of him looking down from the walls, I asked the same question each night. It was the question that the speaker of Merrill’s epic poem “The Changing Light at Sandover” had asked while reaching out for communication with the spirit world:

When an answer eventually came, it was not what I expected.

I’d arrived at the Kerouac House and the Merrill House as an emerging poet seeking more than just time and space for my work. I wanted to touch the physical realities of writers who’d come before me so that I could believe in my own ability to build a reality that resembled theirs. By living, daydreaming, reading, and writing between walls that once held the lives of other writers, I imagined that I could channel the potencies that had led them to generate their work.

At the Kerouac House, I entered a world that seemed to pull my writing toward greater freedom than ever before. My poems sprawled out with abandon as I scribbled in the room where Kerouac (typing on a 100-foot scroll of teletype paper so that he wouldn’t have to stop to load new pages) wrote “Dharma Bums” during a twelve-day burst of manic inspiration. The Merrill House exerted an almost opposite set of forces on my work. The technical mastery of Merrill’s language, mixed with the elegance of his house’s carefully chosen contents, prompted me to write with a stronger drive toward tautness and understatement.

Yet for all of their differences, the two houses, in the end, led my pen down the same path. I’d heard ghost stories about both places before arriving. Past Writers-In-Residence at the Kerouac House had sometimes claimed to hear the sound of Jack’s typewriter keys coming faintly from the back bedroom after dark. I’d met a former Merrill House writer who had experienced apparitions by the bedside at night. But when I sat at the Ouija board and asked is someone there, I didn’t realize that what I truly sought wasn’t a ghostly reply from the netherworld.

What I needed to hear was an answer from myself, a confirmation of my own presence.

Even while my poems registered the energies of Kerouac and Merrill, my fantasy of feeling their voices somehow pour through me didn’t quite come true. What happened was even better. The more I tuned my ears to Kerouac’s wild sound waves, the more my instincts toward restraint rose up to meet those surges. In reaching to emulate the highly rarified concision of Merrill’s work, I felt the more unbridled aspects of my language press against such tight control. At times, it seemed almost as though I could hear the Kerouac in me telling the Merrill in me to eschew all restrictions, and the Merrill in me telling the Kerouac in me to temper liberty with limitation. Amidst the pressure generated by both kinds of resistance, my words became more decisively my own.

In certain ways, this process resembled an idea about literary influence that I had acquired long ago in my study of writing, and which I had already experienced, in various iterations, throughout my life: the notion that one forges an authentic literary self by both absorbing and resisting the work of other writers. But I’d only wrestled with such influences on the printed page, never before through immersion in a writer’s actual living space. To so closely touch the lives behind the words showed me just how simultaneously revealing and elusive life and art can be when viewed in the context of each other. My own life, which had sometimes struck me as too dull and familiar for art, and at other times too alien to fully capture in language, seemed to break open. I felt as though I could walk into it, as I had into the houses of these two writers, and let the ordinary and the strange speak to each other in a language that I’d always possessed but hadn’t yet fully recognized as my own.

Shortly after leaving the Merrill House, I came across a poem by Richie Hoffman, another writer who had occupied the place for a period. After gazing into the ornate gilded mirror that dominates the Merrill House living room, Hoffman wrote these lines:

Looking into the mirrors at both houses, and glimpsing my reflection in the glass surfaces of the framed images (Kerouac at his typewriter, Merrill at his desk) that hung on the walls, I thought I’d see past myself into worlds I longed to inhabit. Instead, the houses and their spirits saw me.

This essay first appeared in The Angle.