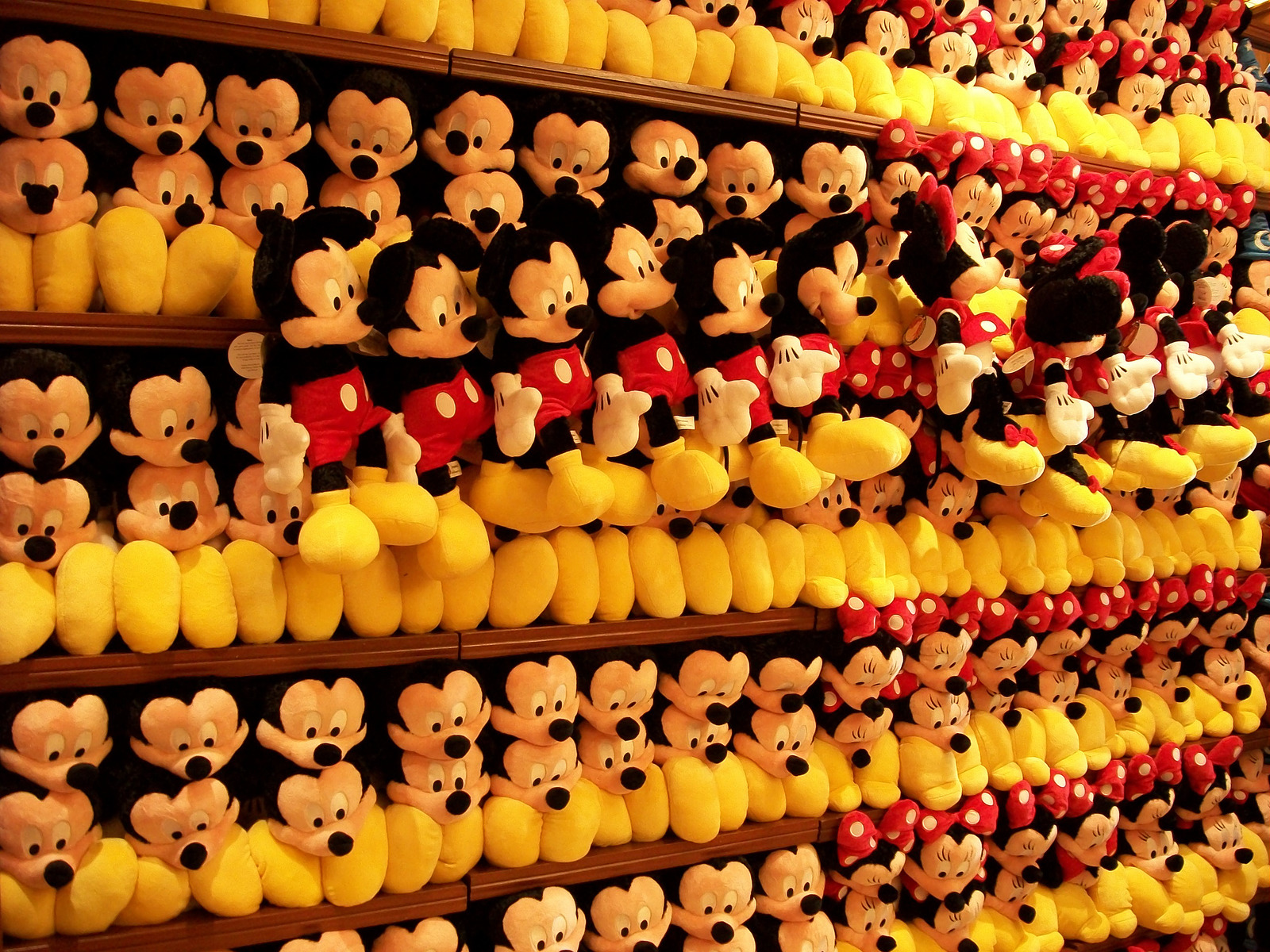 Step 1: Agree to go to Disney with your wife, your wife’s mother, and your two-and-a-half-year-old daughter even though it goes against everything you believe in as a feminist, anti-consumerist, contrarian stick-in-the-mud, because—what the hell—your daughter might have a good time.

Step 2: Realize the night before that, because you’ve never allowed your daughter to see Disney movies, she won’t recognize any of the characters she will soon meet. Give her a YouTube primer on Disney’s enduring influence on basically everything. Limit each video clip to five minutes so that she doesn’t have too much screen time. Show her Peter Pan flying. Show her The Little Mermaid swimming. Show her a teapot singing while Beauty and the Beast walk down a flight of stairs. Do not show her the scene in Dumbo where his mom is taken away from him. This will make your two-and-a-half-year-old daughter cry.

Step 3: Choose to go on a beautiful, cool Saturday during the winter break.

Step 4: Realize that everyone else has probably also chosen to go on a beautiful, cool Saturday during the winter break. Wake your wife, your wife’s mother, and your two-and-a-half-year-old daughter up early because goddamn it, you’re going to get to the park before the rest of those lazy ass motherfuckers.

Step 5: On the drive to the park, download an app that shows the wait time for all the rides at the park. Notice that because you did not wake up early enough, many of these rides already have wait times. The park has only been open 15 minutes.

Step 6: Try to enjoy your first experience waiting in a line. It will be a row of cars waiting to pay $20 to park. Pay $20 to park and when the parking attendant with puffy eyes and a too-tight pastel uniform hands you a receipt and tells you to have a magical day, tell her to do the same, even though you both know that probably won’t happen.

Step 7: Realize that you forgot the stroller. Wait in line to pay $15 for a magical rental stroller.

Step 8: Take a picture of the castle that everyone else is also taking a picture of. Your daughter will probably not want to smile for this pictures because it will still be early and she will be overwhelmed by all the people walking along the fake Main Street and by the fact that you and your wife and your wife’s mother keep getting in her face and yelling Mickey! Secretly tickle her so that she smiles. Take the photo.

Step 9: Decide to go on the carousal first because that will be low-key. Nearly get trampled by other parents who also decide to go to the carousal ride first and who rush the gates to get an outside horse for their child so that their spouse or parent can get a good photo of said child going around in circles. Realize you have similar intentions and, when you see an outside horse, lunge at it while yelling at your daughter to run quickly so that you can saddle her up and claim said horse as yours. Go round and round in circles while your daughter almost smiles and yells at your wife that she is on a horse. Listen to your daughter yell at your wife that she’s on a horse each time you pass your wife taking pictures while you and your daughter go around in circles. Be glad when the ride comes to an end.

Step 11: Use one of your Fast Passes to go on the Peter Pan ride because your app tells you the wait is now an hour and fifteen minutes. It is 9:15 in the morning. Fly over scenes from the movie in a mechanical car that is meant to make you feel like you are also flying with Peter Pan. Recognize that you are not, in fact, flying with Peter Pan and that the ride is definitely not worth an hour-and-fifteen-minute-wait, and pat yourself on the back for having had the good idea of using one of your three Fast Passes for this experience. Feel satisfied for the first time that day.

Step 12: On all rides and throughout most of the ten hours that you and your wife and your wife’s mother are at the Magic Kingdom, point out Disney characters to your two-and-a-half-year-old daughter that your two-and-a-half-year-old daughter does not really know or care about. Notice that she continues to have the same basic expression on her face. It is decidedly not magical.

Step 13: Experience a moment of real joy while in a teacup that you are allowed to make spin around in circles. Ignore the fact that your mother-in-law looks slightly peaked across the teacup lip from you. Keep turning that wheel that turns your teacup. You deserve joy too.

Step 14: Look for a nice quiet place to eat the packed lunch that you and your wife and your wife’s mother made so that your family wouldn’t waste money on the shitty food at Disney. When you cannot find a nice, quiet place, sit on a low brick wall beside a trash can. Eat your packed lunch in the most magical way possible.

Step 15: When your daughter shows real happiness at seeing a fake Winnie the Pooh and Tigger walk by, grab her and run after them. Follow Winnie and Tigger in to a small, enclosed space where a line has already formed with other families also hoping to meet them. Get in said line with your daughter and wife and your wife’s mother and assume that it will only be a five-minute wait.

Step 19: Remember that this is about your daughter and take her into a store so that she can hug stuffed animal replicas of Mickey Mouse, Minnie Mouse, Winnie the Pooh, and the princesses from Frozen, a movie your parents let her watch. Notice that she is smiling unprompted and try to be happy that she is happy even if you could have done all this at the Disney store in the mall back home.

Step 20: Go to the bathroom to be alone for a moment. Sit in the splatter drops of someone else’s pee and feel like giving up.

Step 21: When your daughter falls asleep in her $15 magical rental stroller, volunteer to push her around the park while your wife and your wife’s mother wait 45 minutes for the Haunted Mansion ride. Push your daughter around the park while she naps and realize that walking without a destination makes the whole experience a lot more enjoyable. Pass riverboats treading a river. Clatter over a bridge. Stop to watch a waterfall fall. Look up at the bluish glow of a castle. Hear the distant call of a railroad train. Smell turkey legs. Witness four-year-olds in blue eye shadow and princess slips. Notice whole families wearing the same t-shirt announcing that they are part of the same family and that they are on a family vacation together in this year, 2016. Envy, not for the first time, how easily some people are made happy.

Step 22: Find a nice spot in the shade and sit down. Look at your daughter’s tiny dimpled legs jutting out from under the jacket you have thrown over the edge of her $15 magical rental stroller to protect her from the sun while she naps. Feel genuinely at peace there in the shade beside your sleeping daughter behind a machine that smashes a penny into the shape of Mickey Mouse for fifty cents.

Step 23: Skip the evening fireworks over the castle to go to Frontierland to buy your daughter a pretzel because you have run out of premade healthy snacks but also because she wants one, and she has wanted so little today, you want to buy her something that will make her happy. Watch the distant glitter of the fireworks while you wait in another line to buy two $5 pretzels shaped like Mickey Mouse. Listen to the people behind you complain about the lines and how Disney is no longer about the children, it’s all about the money, and about how Walt would be rolling in his grave if he knew what they had done with his park. Envy their belief that things were at least once upon a time only about the children and not about the money. Buy two pretzels and eat half of one walking back in the dusk toward the bluish glow of the castle where dreams come true.

Step 24: Hug your daughter when you see her again and delight in how much she delights in a pretzel.

Step 25: Take a ferryboat ride back toward the first entrance where you will then take a tram toward your car. Become confused about the signs pointing to two sets of trams: one for those parked in the heroes’ section and one for those parked with the villains. You will have parked in the Simba section, but neither you, nor your wife, nor your wife’s mother, or your two-and-a-half-year-old daughter will have seen the movie in which Simba stars. Ask a smiling attendant whether Simba is a hero or a villain. The smiling attendant will smile and say that Simba is a hero, but then he will add that, really, that’s up to our interpretation, isn’t it? Maybe what we think is a hero is really a villain. Or if you think about, our villains might all be heroes in the end.