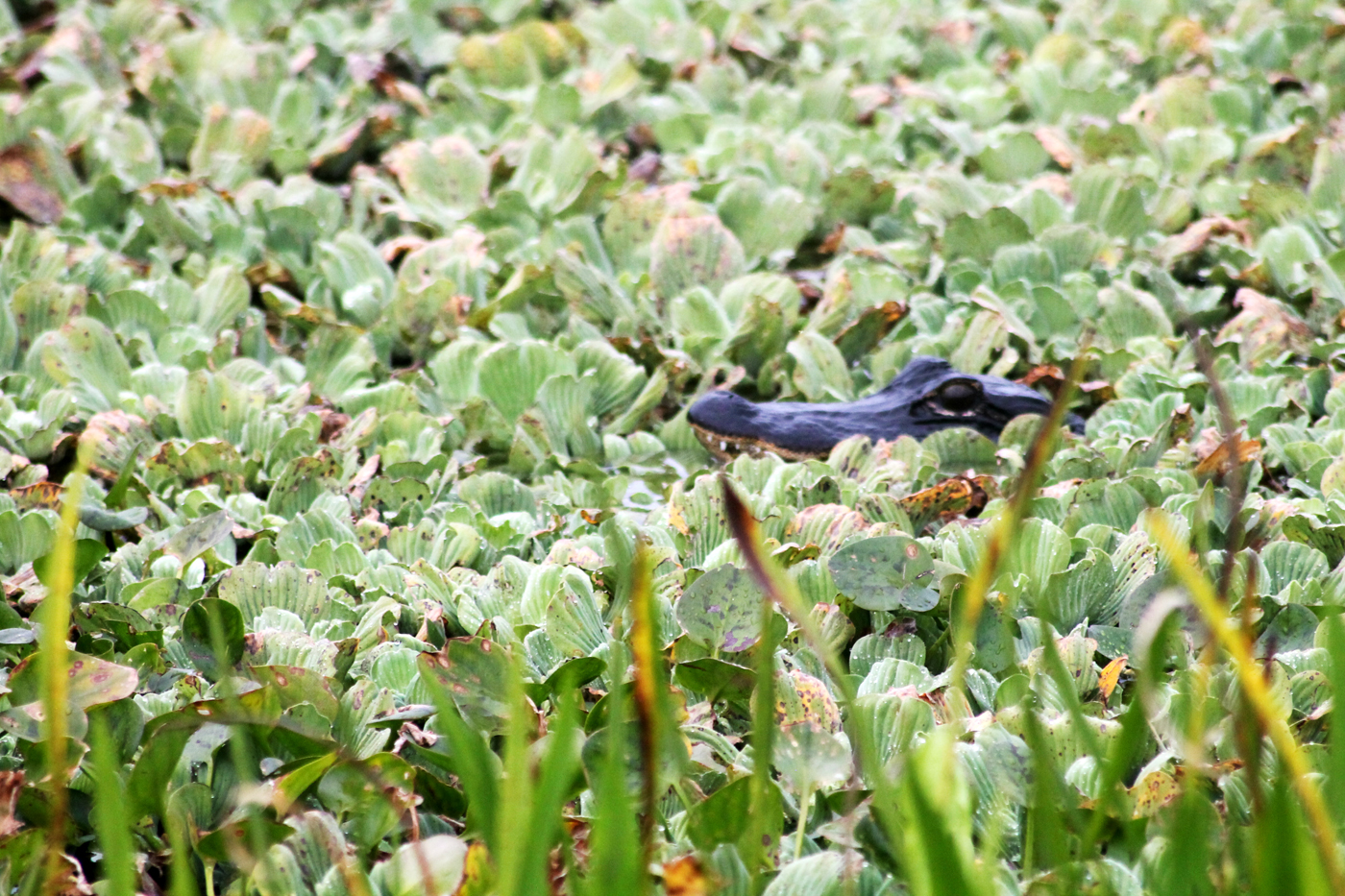 An Examination of Fear Through Swamp Monsters

That could be a description of your surroundings.

Or of the overgrown prairie of your paralyzed mind.

Or of the vision that denies you a suitable escape.

All that matters is that it was dark. And you were drawn.

Dark is an abstract idea that’s thick as a half-ton gator.

When darkness falls, it’s not a stumble, but a plunge. In the Sunshine State, dark is what lights up eyes across a swamp that slumbers in sluggish style by day. It’s when most people choose to retreat to air-conditioned dreams. It’s what colors our nightmares. The sunken impression of a hiker’s tracks through the muck. It’s a temporary state that allows your prolonged fears to follow.

A man recalls his darkest moment.

“I remember thinking to myself that I am going to die.”1

Parched, he’d come upon a lake clearly designated for swimming. He’d been in that water dozens of times. This time was different.

It was the sun that coaxed him to cool off that day. It took only seconds upon entering for his arm to heave downward. He was plucked from designated safety by an alligator that doesn’t read signs.

He spiraled in a horny-scaled death roll deeper into the water. Deeper into the dark. He lost his arm, but not his life, not his memory. “Your pupils dilate, your heart races, your muscles tense … The hormones the amygdala triggers temporarily enhance memory function so the awful experience that triggered the response will be vividly encoded and remembered.”2

We retain our scariest experiences with a commitment every other memory envies. It’s not a choice, but a chapter that influences an entire life story. “I will never forget how big the mouth of a large gator is when it is wide open.”1

Fear is a function of our survival. Victims become icons of finger-wagging. Moms cite Darwin Award winners like celebrities. Society’s cumulative history extols these tales as wisdom. Some escape those narratives and remain immune to common fears. It’s not a setback, as many assume. Survival is not always societal. It can be and frequently is individual. Ask a kid about fear and you often encounter an unwitting bravery.

“About a month ago, a 5-year-old girl was sitting on the deck with her parents right behind her as we pulled up to a big gator, which slid down into a hole … when all of a sudden, BOOM, the big alligator came lunging out of the water, mouth open, almost to the deck. Another couple feet, and he could have grabbed the girl … The little girl never flinched.”1

Knowledge isn’t always power. Ignorance is a worthy partner. Just as a gator acts fast on land and in water, we acquiesce to adapt to a mental landscape that maps narrow views to define niche worlds. You are what you compute. Fear is electric by necessity, because if you didn’t feel it, you’d stutter in response. That’s how ignorance keeps you alive. “A decision that comes from [fear] is hard or even impossible to explain in words. You don’t know why you feel the way you do, you just do.”2

The mind goes dark when fear drives decisions. It’s what prompts you to consider an exit you never imagined could be your only option.

“Like a landmine exploding, the water erupted and the jaws of a nine-foot alligator closed on his thigh. Falling, [he] blacked out and woke up momentarily on his back, looking right into the gaping mouth of the gator.”1

Whatever lets you sleep at night.

Either way, win or lose – the world spirals on without you. The tail you perceive as your trophy is an important part of what powers the death roll. Thus the petty impact of your self-empowerment is like a dragonfly that lands on a gator’s eye. The trapper marks the win, but the gator at best blinks. Victory by indifference. Triumph when your opponent desists. The score is only reflected in the trapper’s heartbeat. He’s the champion of that-one-time, collecting imaginary ribbons right up until he’s in the wrong place at the wrong time. Because the world in its infinite wisdom has no heart and therefore no limits. The scene always outlasts the characters, even when the stage goes dark.

People are not as privileged. For each of us, it is the same: You figure out what’s safe. You thrill yourself by approaching its borders. Occasionally, you breach that barrier (which is itself a thing of your imagination). It’s an eye-widening flash in the Peter Pan mentality housed in the Never Never Land that is your worldview. Fear is fantasy.

In Florida, it’s daring to dip a toe where animals as old as dinosaurs eke out a living that depends on critters willing to make that exact sort of gamble. “… When I get too close and a big twelve-footer lunges at me, wow! What a rush. Alligators will keep me young.”1

Do we seek youth to escape the burden of experience? It’s a simpler time we covet, stamping our feet and expecting every day at the beach to be uncomplicated by clouds. Simplify that scene even more – the earliest form of alligators first appeared 200 million years ago, roughly a bajillion eons before humans evolved brains to survive unbridled curiosities. “Fear can be a constructive emotion. When we worry about a risk, we pay more attention to it and take action where warranted.”2

Simple is stupid. Our ancestors died so we could learn to ask better questions. Don’t be afraid to wonder why – or you risk returning to a simpler time when humans were stuck with only their gut. Feeling nauseous? That’s the dark of your stomach explaining its pit. “He heard an explosion in the water and thought the alligator was retreating, moving down and away. As he turned, he found to his surprise that the alligator was torpedoing out of the water toward his head.”1

What to fear first, the teeth or the tail? Give it a spin and find out. The alligator always does, if she can get you in the water. That’s how an expert handler at an alligator farm had his arm twisted into sacrifice:

“[He] tried to jerk free of the gator’s mouth and when that did not work, he attempted to actually pull his hand off his arm … he did not want to be dragged into the pond and run the chance of a gator roll.”1

Bravery always makes the paper. Violence sells. Fear compels. What we don’t realize is that our “lizard brain” is too literal to see through the media game. “More fear, more reporting. More reporting, more fear. Like a microphone held too close to a loudspeaker, modern media and the primal human brain create a feedback loop.”2 We’re inevitably doomed by our love for fear-mongering drivel.

It’s not that alligators have honed a taste for humans. It would be impossible. They have no tastebuds. Attacks are primarily self-defense or automatically triggered by the dotted black censors that speckle the gator’s lips. Gators prefer marsh rabbits or apple snails to humans and attack out of their fear of you, not hunger for you. That is, unless you stumble upon a rogue:

“Can we assume that there are a certain number of alligators … that attack without provocation, just as a small segment of the human population does?”1

These stories are sensationalized and memorized but rarely trivialized. The horror of the few dominates the discussion. We overreact when we should evil-villain laugh. We seize the power back as if we ever lost it, bullying the bull-headed. Baiting and terrorizing them until they’re forced to win by statistics. And then the headlines scream. History repeats. The brain regurgitates plots more often than desperate Hollywood directors. It drops jaws. We gulp dread.

“A big gator is designed to bite like a pit bull grabbing a prime rib, then twist in a death roll like a Texas tornado.”1

That’s the thought alligators are made of.

The alligators in Florida are smaller – on average – than other places because they don’t have enough space to grow to their full potential. We ruin their splendor, just to build sinking cities. We crowd them out of their hiding spots. They end up in pools, under cars, lining ditches on dirt roads. Their environment confuses their instincts. We provoke unnatural behaviors. They crack, like a surly teen who snaps at the dinner table because she just wants to be alone in her room.

A trapper shines a light on an alligator in the water near a residential community. He’s done this dozens of times. He’s been bit plenty. Still he’s confident he has control.

Sometimes confidence is the devil on fear’s shoulder. Sometimes fear is the brave response.

“Under the spot, [the alligator] dove and then resurfaced quickly, which is uncharacteristic for an animal of its size. The gator snapped its jaws four times.”1

While humans are forced to define our feelings due to an ill-advised, evolved curiosity, the gator has no language to express or analyze his response. What he knows is based on experience alone. If he’s been living close to humans, what he knows differs vastly from the survival code imprinted on him from his very first day alive. What he knows is that light now sometimes means dark.

“Intuition is nothing more and nothing less than recognition.”2

Stamp through an open wetland – if you aren’t too afraid to see the state you live in.

Leave the path and feel the marsh soften. Did you know it’s possible to shoot down a gator hole without even realizing you’re walking on water?

Train your eyes to spy their forms. Mistake them for logs. Watch their colors change like the seasons we sorely miss. Find one on a path and sneak by. See one crawl across the water, hooking its arm in a rare reveal of its webbed foot. If you’re lucky, you’ll catch one feeding. It happens whenever opportunity strikes. The sight strikes fear even in those who are most familiar.

“They all look like dragons … especially when they raise up their heads to swallow. Looking at the underside of the big throat and teeth from the upper jaw while the tail is arched up is definitely frightening.”1

Via dedicated conditioning, a fear can be overcome only very occasionally. More frequently, the fear is managed. We box the darkness in an empty cell we stow in our primal brains. That’s where it is. I’m safe because I know it’s there. Except a present fear is always present, and conscious thought is overrated.

“Remarkably, there is no sign yet of alligators … and therefore they no longer inspire fear. I still want to see them, but on my terms, which is to say, before they see me.”1

What you think is only part of your thought process. You can’t control your brain, and neither can the alligator. You’re soulmates in stuck-this-way.

What you can change is what you tell yourself. “Self-interest and sincere belief seldom part company.”2

Author’s note: this essay is based on imagery and insights encountered in Florida’s parks and preserves, as well as CC Lockwood’s The Alligator Book1 and Daniel Gardner’s The Science of Fear2.