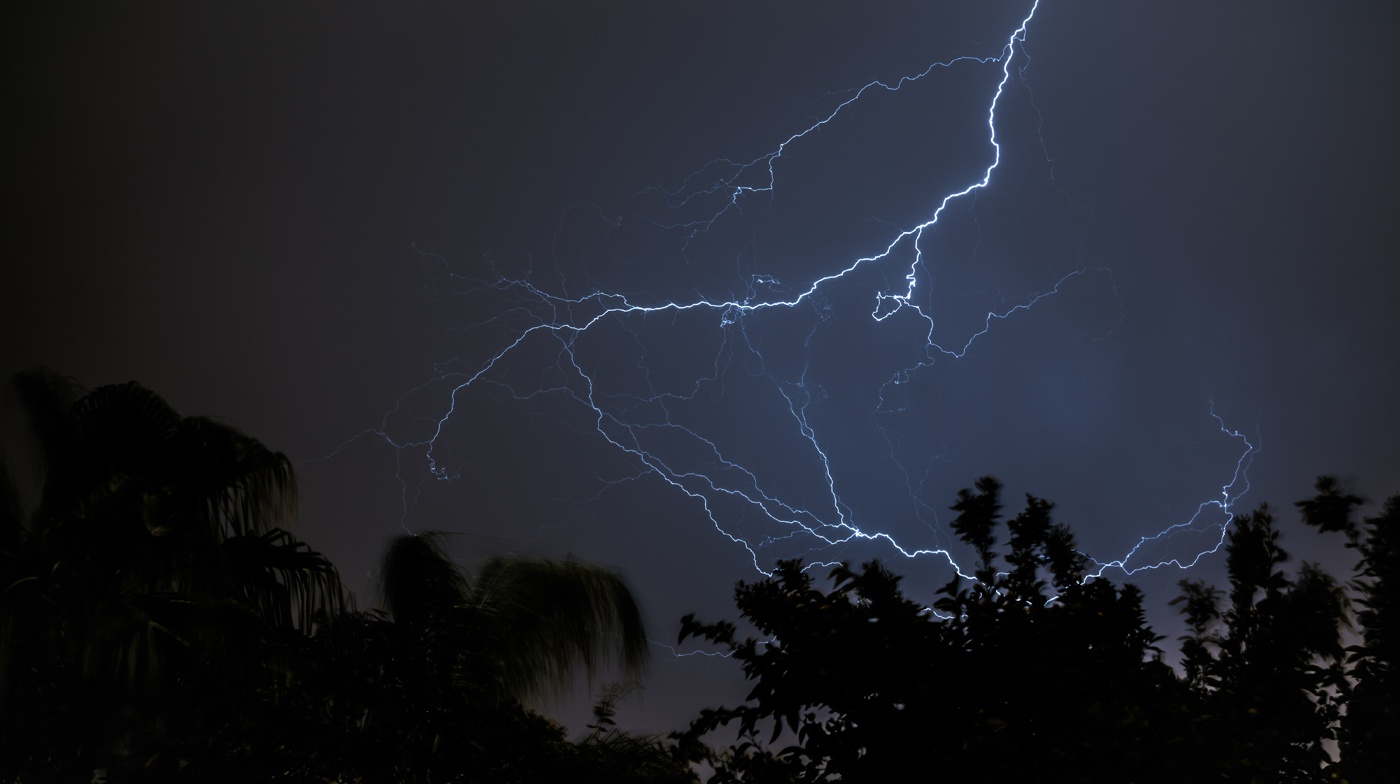 In Florida, are you more likely to be struck by lightning, or a bullet in a mass shooting?

On July 20th, I was driving to work, listening to NPR, when I heard a report about two teenagers from North Carolina getting struck by lightning on a Florida beach. One was struck directly, and in critical condition. The other, struck in the leg, was in fair condition. The story aired between bigger and longer pieces on worldwide terror and murder, but this—two kids on a beach during an electrical storm—is what jarred me.

I wondered why. I rationalized that I am afraid of terror and murder already, but I am not afraid of lightning. Then I heard that story and thought: Maybe I should be.

According to the National Oceanic and Atmospheric Administration, the odds of being struck by lightning any given year in the US are 1 in 960,000. Every year, on average, 49 people are struck by the up-to 600 degree Fahrenheit lightning bolts that radiate with up-to one billion volts of electricity. Ten percent of those struck die. Most victims of lightning, though still breathing, suffer lifelong injuries, including brain and nerve damage. Still, the odds are good it won’t happen to you.

The general odds, though, don’t tell the full story. The NOAA has compiled many other factors that might increase the risk in a detailed analysis of lightning deaths from 2006 to 2014. For instance, no one seems to know why, but roughly 80% of lightning strikes hit males. The most concentrated amount of lightning deaths happens to people in their twenties. Weekends are the most common days for being struck, with roughly two-thirds of strikes occurring between noon and 4pm. For the obvious reasons, roughly 70% of strikes happen in June, July, or August, and roughly 60% of the people struck are engaged in outdoor leisure activities.

If you live in Florida, where I live, the odds of being struck by lightning are not 1 in 960,000. Discover the Odds calculates that they’re about 1 in 615,000. Over a lifetime, then, based on the same calculation the NOAA used for the national statistics, the odds are more like 1 in 7,500.

Florida ranks number one for national cloud to ground strikes per square mile, casting roughly 1.4 million bolts a year. Before June rolled around this year, Weather.com reported that 1,700 lightning strikes hit Palm Beach County in less than two hours. I imagine, in those two hours, the odds of getting struck by lightning this year were significantly higher than usual.

You’re also worse off, as many reports this summer show, if you are hanging out in Florida but don’t live in Florida. Tourists are not typically familiar with the frequency and ferocity of our thunderstorms. They do not know how quickly they roll in, sometimes out of nowhere. They do not understand the close proximity of lightning when it strikes.

This is what happened with the two teenagers from North Carolina. An article in the Charlotte Observer reported that the sky went from clear to storm-gray in about thirty minutes, and the two did not heed the warning of the approaching thunder. When the storm pounded down, they ran for cover. That’s when the lightning struck them. Had the two teens been from Florida, though the sky above their heads was a picturesque blue and white, they might have known to look westward, where the sky had turned into a mass of gray clouds. Had they been from Florida, they might have taken the thunder seriously, especially considering they were near a large body of water.

This was not the only lightning strike news this summer, of course. I dug around to find that, on another Florida beach at the end of June, a woman from Georgia was struck and killed. She and two friends, who were also struck, had been standing in the shallow ocean water during the storm. It’s likely these three had not heard the news from earlier that month: ten others had been struck (one killed) by lightning on the very same beach. In this case, the one who died was from Colorado. Colorado lightning is intense, too, but it is nearly three times less lethal than Florida lightning.

Every year in Florida, an average of five people are killed by lightning. Over 50 are struck. But those struck by lightning who are not active, elderly, non-Floridian males visiting a Florida beach between noon and 4pm on a weekend probably take no solace in the statistics.

So that settles it: I am officially afraid of lightning.

But finding all this out made me wonder: Living in America, in Florida, in Orlando, in summer 2016, what should I fear more—being struck by lightning, or a bullet in a mass shooting?

I am definitely afraid of mass shootings. At the beginning of each Fall semester, my fellow college faculty and I must take “active shooter training.” I do not feel any more equipped to deal with a mass shooting after being subjected to the information. Most of the training points to one conclusion, anyway: If it happens, the odds of survival aren’t great.

To quell the fear, I try to think about the odds of it happening. A recent article in the Washington Post called “The Math of Mass Shootings” reveals 27% of mass shootings happen in the workplace. Eight percent happen at schools. When your workplace is a school, then, the odds of a mass shooting must go up. I do not like that. So I keep scrounging around the internet. Most of what I read tells a similar story: You should not be afraid of mass shootings. In 2015, the odds you would have died in a mass shooting were a little less than one in a million. The same odds, relatively, of being struck by lightning.

The Mass Shooting Tracker, a crowdsourced website tracking data since 2013, classifies a mass shooting as a single shooting incident that kills or injures four or more people, including the shooter. I am equally scared to be seriously injured in a mass shooting as I am to die in one. The numbers on the tracker show that if you’re present in a mass shooting, you are over three times more likely to be injured than to die. And, as with lightning, there’s no stat about how many of these injuries and traumas might be worse than death. As 1,856 people in 2015 were either killed or injured in a mass shooting, recalculating the odds for either fate is more like 1 in 200,000. And if you crunch the numbers over a lifetime, the odds are closer to 1 in 2,400. At what point do the statistics legitimize the fear?

Before June 12th, I never thought Florida, let alone Orlando, let alone a gay night club down the street from my house, would be the target of a mass shooting, let alone the deadliest in US history. It seemed so far against the odds. But it did happen. Am I supposed to feel safer because it didn’t happen to me? Or because I’m not gay?

The “Math of Mass Shootings” counts 874 deaths by mass shooting since 1966. These victims are demographically diverse. The odds seem to have nothing to do with your skin color, the deity you do or don’t pray to, or the gender of the mouths you kiss.

In 2015, Florida hosted 29 mass shootings. One was in Orlando, but no one died. (There were 371 nationwide: 475 dead, 1,870 injured.) If anyone at Pulse on June 12th had known about the 29 mass shootings in Florida last year, or the 14 in the first half of this year, might anyone have decided not to go dancing? No way. The numbers would’ve assured them they would most likely not be the victims of a mass shooting. But they were.

If that’s not enough, according to “The Math of Mass Shootings,” the FBI’s data on mass killings is only about 57% accurate. So if you needed any more incentive to ignore the odds, the odds, most likely, are not even correct. More than anything, what the math in this article suggests is that I should be less afraid of mass shootings than gun-related death or injury in general.

But those are general odds. Unlike in mass shootings, demographics play a huge role in gun deaths. The article on Vice indicates that as a 30-year-old white American male with a steady white collar job in suburban Orlando, statistically, demographically, the odds are much more likely that I won’t die from gun violence. A person with black skin my age has four times the amount of risk I do. That is not fair, but, statistically, that is true.

All these numbers do not help me much. Lightning, bullet, whatever the odds, I am mostly struck by their irrelevance. Most significant things in life, it seems to me, happen against them.

What are the odds, for instance, that any one of us might have been born and become who we have become? My brain is only capable of imagining a small fraction of the variables that have contributed to my birth and subsequent constructed identity. Yet here I am. And here we all are. I know I am going to die one day, but I do not know the odds that I will die peacefully at an age I deem appropriate with a life that, ultimately, satisfied my deepest needs and desires. Those odds are probably not good. But I still hope for that.

On an individual basis, like lightning, life and death seem unpredictable. They seem to operate from cloud to ground, completely out of our control. We can investigate the statistics, but there is no way to know if our lives will operate as the odds suggest or in spite of them.

The fact remains that I can die in plenty of unexpected ways at any unexpected time in my life. Heart disease kills more than guns or automobiles every year. And then there is cancer. In order to decrease the likelihood that I develop heart disease or cancer, or get in an auto accident or struck by lightning, there are things I can do. I can eat well and exercise. I can read whatever articles purport to know what causes cancer, and adjust my lifestyle. I can drive cautiously and wear a seatbelt. I can look up tips on the internet to avoid being struck by lightning. It might happen anyway, but, on the other hand, I might also worry myself into a prescription pill habit and take a myriad of paranoid personal precautions that dictate my life. Who knows?

As a nation, regarding mass shootings and run-of-the-mill gun violence, we’re still arguing about what we can do. Depending who you ask, the answer is either more guns or less guns. We argue more, but nothing changes except the odds. Those go up.

When mass shootings happen, to combat the horror, the insanity, the hate, we try to focus on the positives. We look to stories of people helping people. We saw it, for sure, here in Orlando. So allow me, for a moment, to be positive.

There is more to the story of the two teenagers from North Carolina. The Charlotte Observer reported, which NPR did not, that after the lightning bolt struck, the boy hit in the leg lost all feeling there (though later regained it), and the boy hit directly went into cardiac arrest. He stopped breathing. He turned blue.

At the same time, from the sixteenth floor of a condominium tower, a nurse on vacation from Pennsylvania happened to see them. She got down to the beach and performed CPR on the one who was, presumably, dead. She saved his life.

I read about that nurse, and I had to think: What are the odds?