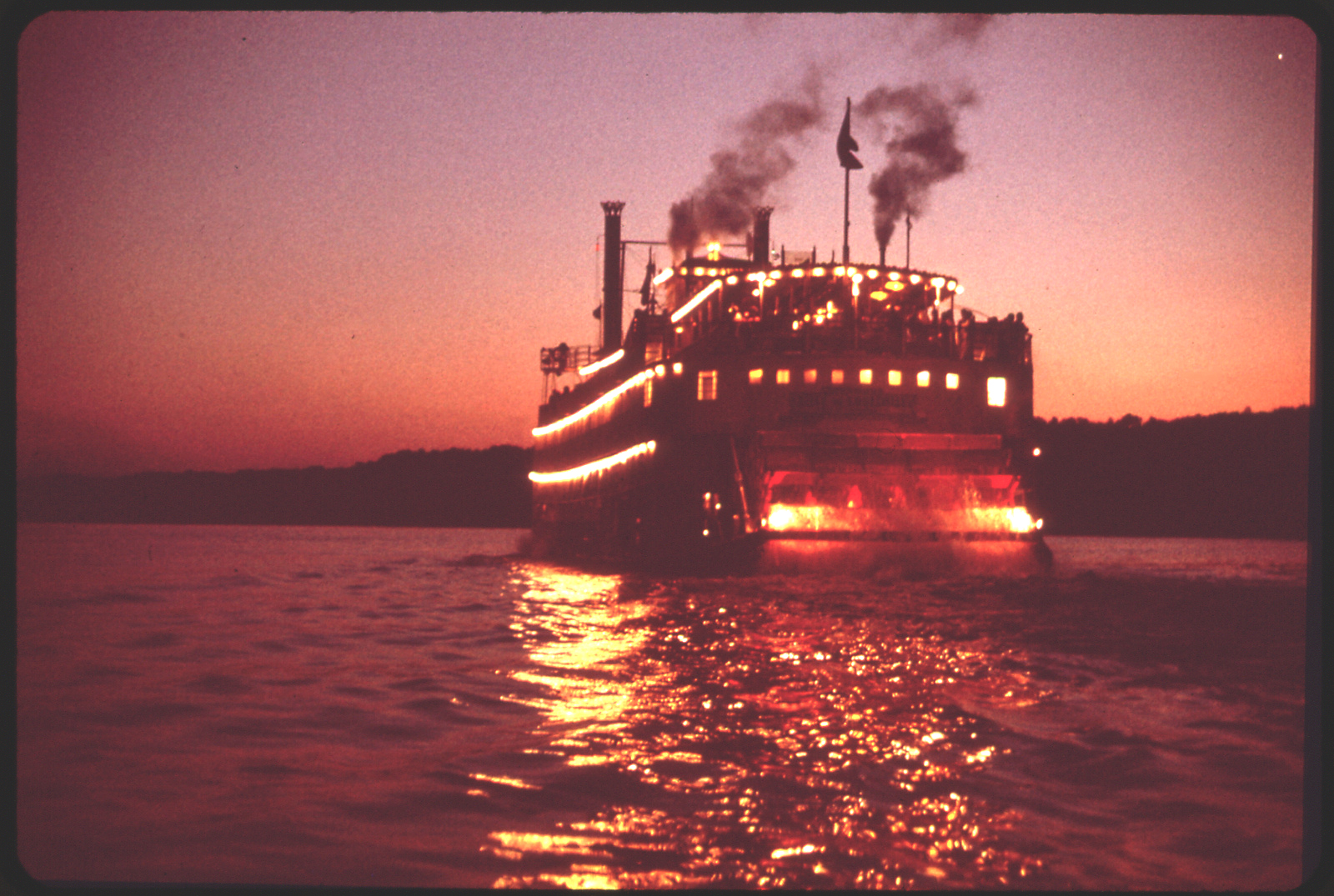 They live on the Ohio. On both sides of the river, green hills stack up one behind the other, fading into the sky. On summer evenings when houses can’t let go of the day’s heat, they walk down to the boat landing. Women throw bedspreads down on the grass and line them with children, shoulder to shoulder. Men hand their wives beers, and they sit together in lawn chairs, smoke cigarettes, and watch the boats troll in and out of the marina. They lay claim to their favorites by the mere pointing of a finger: this green Skeeter, that white Donzi with a cuddy cabin. This game is called I’m Going to Have That Someday, and they’ve been playing for a hundred and fifty years. Once they sat along the banks and watched the smoke rise from the stacks of the great Delta Queen. Now, they watch jet skis cut through the water in foamy brown swaths. Out where the water runs deeper, mile-long barges drift by, bound for Cincinnati, Louisville, Evansville, Paducah, and then Cairo, where the Ohio joins up with the Mississippi and turns its head south all the way down to New Orleans and the Gulf of Mexico. They watch the river as if it’s television, as if, at any moment, it might tell them something they’ve been waiting to hear.

They live in the river town of Laurel, a village built into a hill. Its brick homes and white-needled church spires surround the harbor, like the vaulted seating of an amphitheater, and the coming-and-going of the boats in the marina provides a slow drama that only ends in winter when the river becomes ice. Winter in Laurel is long and brown. In spring, the river rises, creeping up backyards and filling their basements with the Ohio. Some years, it fills the first floor too, so they move the furniture upstairs and watch the river lap at the windows. The water marks on the walls show more than a century of floods. When the river finally recedes and resumes its narrower course, they shovel mud from their kitchens, gather up the branches and rubbish and dead animals that settled in their yards. High ground is costly in river towns.

They live in Laurel, a town with two industries: whiskey and caskets. The Laurel Casket Company specializes in metal coffins the earth can’t break down. Men work the presses, and women hand sew the tufted satin interiors. If they build up twenty years of seniority at the casket company, they’ll be buried in the finest coffin made in America: a Four Point Regal Brushed Bronze casket with a Sandalwood Quilted Premium Velvet interior. Remember, their kind has always been laid to rest on hard pine.

If they want their rewards in the here and now, they can work at the distillery, a red brick fortress sitting up on a bluff like the castle of an overbearing king. Smokestacks billow out a fine soot, and the air always smells of sour mash. Every day, the men and women of Laurel walk into the belly of the factory, and every night, they’re allowed to leave with a flask of 190-proof barrel whiskey. For generations, it’s been this way. Whiskey is in their blood and in the air they breathe. They make a good living. The distillery and the casket factory run twenty-four hours a day, except Sundays, when the people of Laurel are given a day to rest and thank God for the way of the world: people keep drinking, and people keep dying. Praise the Lord.

They live along the Ohio River in Laurel, so named for the beloved wife of Colonel Thomas Pike, founder of the distillery and the casket company, and who also owned at one time or another a Nevada silver mine, a Philadelphia brewery, two Alabama plantations, and a small fleet of steamboats. Back in 1853, Colonel Pike bought ten acres of hilltop property that offered a view of the Ohio five miles in either direction. The house he built was in the Italian Renaissance style popular at the time, but he added special modifications so that it would resemble one of his beloved steamboats: a rounded porch, colonnades, two tall chimneys like twin smokestacks, and a circular rooftop belvedere like a steamboat pilot house. Colonel Pike called it Hillcrest Mansion and spent his days up in the pilot house with a spy glass, waiting for his steamboats to land and deliver his money stuffed in wooden barrels marked “Nails.” Colonel Pike was an old-fashioned man who never much trusted banks.

The descendants of Colonel Pike don’t live in Laurel anymore, so the local historical society bought and refurbished the house to its original splendor. For two bucks a pop, the people of Laurel tour the mansion. They climb the flying staircase up to the belvedere, look through the same curved windows, and see exactly what Pike saw all those years ago: a steamboat moored at the landing below. Passengers stand in long lines, tickets and money in hand, waiting to board the riverboat strung with millions of tiny lights. You have to look closely to see that the windows are painted black squares and the paddlewheel is just for show. This boat never leaves the landing, and no one stands on the deck, even in good weather. They are all inside, cashing their checks from the distillery and the casket company, pulling the arms of slot machines. Beer is a dollar, mixed drinks are two, and the boat runs twenty-four hours a day.

You’d think that whiskey and caskets would have sufficed, but the casino people came to Laurel and said they could bring back the past, the days when the riverboat brought them boundless prosperity. They argued about it for a couple of years, then put it to a vote, and the people who wanted the boat won. Now, busloads of people come to Laurel from Cincinnati, Northern Kentucky, Louisville, and Indianapolis, but they never stay in town to shop or eat, like the casino people said they would. Most of the passengers on the boat are from Laurel, and every once in awhile, but not often, one of them wins a couple thousand and gets their picture in the paper. They believe there’s a system to winning. The slot machines on the ends of rows are more likely to cash out. Choose a cold slot machine over a hot one, but get off if it stays cold. Choose a hot craps table over a cold one, but get off while it’s still hot. Look for indicators, for signs.

This is the game of I’m Going to Have That Someday, and they’ve been playing for so long they don’t know how to stop. They can’t see that the only big winners are people who can afford to play ten dollar slots. They can’t see the barrels of money the casino people ship via armored car to their headquarters somewhere far away. They can’t see that Colonel Pike and his progeny own the distillery that makes the whiskey they can’t stop drinking, the factory that makes the caskets they must be buried in, and the boats that will bear them away down river to the place that is next.