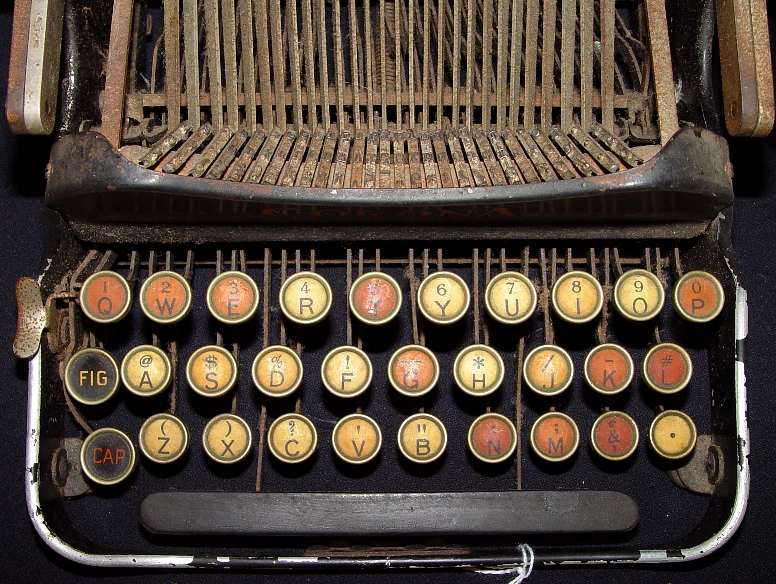 A small antique shop built of brown, weathered clapboard. Inside, for sale, an old typewriter. Caught in its dusky roller, a sheet of paper with a poem by James Wright typed onto it. But no: on second glance, no paper at all.

Abandoned on the side of the road: a yellow dish sponge, banded with dried dirt and grime, the sponge itself stiff as lichen. And then gone altogether in the blink of an eye.

Slumped against a cemetery headstone: a pale, thin man, nearly a skeleton now, his beard as grey as the stone itself. And then, just like that, no man at all, the grey beard actually an emaciated white plastic bag blown in from the icy January wind and snatched by the gravestone’s hewn edges.

Basil wasn’t his real name, but it’s what Ben—and everyone else—called him. Basil and Ben. They worked in a little restaurant, Italian. Ben cooked, Basil bussed tables.

Basil. He walked his old, skinny body out into the dining room, stroked the silver beard on his long face and looked for tables that needed cleaning. He called himself a “spare-time poet.” He whistled constantly, tunes he likely made up on the spot, a yellow sponge always sticking out of his jeans’ back pocket. He was soft-spoken, as if each word had just lifted its head off its pillow.

On a slow Wednesday, Basil pulled out of his pocket a contraption and placed it on the table they were sitting at. The contraption was like nothing Ben had ever seen. It was white and made of plastic and, at first, Ben thought it was an old Walkman. But it was too narrow. There was a digital readout on the front that was counting down from 63 minutes.

“You know what this is?” Basil asked, touching Ben on the shoulder. “It’s to help me stop smoking. My pack of cigarettes is in here and the thing is locked for another”—he read the readout—“Sixty minutes. There’s no way I can open it. I have to wait till the thing unlocks.”

There were times Basil would touch Ben lightly on the shoulder, just to accentuate a point he was making with an emphatic whisper: “The car turned heads”—a touch on Ben’s shoulder; “To this day, I only use a laundromat”—touch—“because of the people”—again, a touch, his fingers lingering, then gone.

“Can you believe that, I have to wait till it unlocks.”

That night, on his patio, sheets of rain banging on the tin roof overhead, Ben read James Wright’s “Arriving in the Country Again.” He thought of the speaker in the poem. He pictured the speaker standing outside his friend’s house in the late afternoon, the day still there, but slowly disappearing. The speaker’s friends are just inside, waiting for his arrival. And that moment must have felt like pure bliss for the speaker—to revel in the idea of genuine friendship, in the anticipation of what’s to come once he crossed that home’s threshold and said his hellos. There are few moments charged with as much beauty, thought Ben, as the one that comes right at the brink of happiness. The laughter that is to come, the glossy sheen of shared nostalgia. The sweet snap of recognition that the present, too, will be revered one day in the future.

The next day, before going into the restaurant, Ben stood outside in the parking lot and peered in. Basil sat at the front table, looking down at something, the white cigarette contraption sitting there on the table next to him. He was so still he could have been a mannequin, a fake, the real Basil having been dragged away by who-knows-who to who-knows-where. Lying dead in a ditch somewhere. The random thought shook Ben, and then he snapped back to reality and went inside. He sat at the table and Basil told him about Jersey, about Sonny DeMarco and Dicky Van Warner and a friend they called Silver because he was already graying at age 22. They’d walk the streets summer nights with sticks in their hands and then drop them outside the door of The Red Lantern, where they’d drink cocktails for free since they knew the bartender, a guy named Jimmy “Saliva” because he sprayed when he talked. Afterwards, they crawled to Village Diner to fill their stomachs with Taylor Ham and runny eggs and thick, buttery toast. He just launched into all these stories without warning. “But I’ll never forget Sonny,” Basil said, looking off to the side. “There are some people you just never forget.”

Basil died a little over two years later of cancer. And a year after that, Ben moved to a neighborhood in Brooklyn called Greenwood Heights. He worked in Manhattan, near Union Square, and it was on the R train to work when he swore he saw him: Basil. The man was standing near the door, on the other side of a woman dressed in blue. Ben was back a little ways, so it was hard to get a good view. He leaned over, tried to peer around people and, just as soon as he would catch a glimpse, the woman in blue would shift her body so that Basil would be back out of view.

The train stopped at Atlantic and it emptied out, including the man who looked like Basil. Ben couldn’t catch up to him. He was gone.

“You know what this is?” Basil had asked Ben. “It’s to help me stop smoking. My pack of cigarettes is in here and the thing is locked for another—“ He read the readout and said, “sixty minutes. There’s no way I can open it. I have to wait till the thing unlocks.”

“Can you believe that, I have to wait till it unlocks.”

Outside the restaurant, a college kid walked by, pushing his bike along the sidewalk. The headlights of a pick-up blinked on and off and a man climbed inside the truck. A bird flew down to the asphalt, picked something off the ground and flew back up. The day outside carrying on without them.

It hadn’t even been five minutes since Basil showed Ben the cigarette contraption for the first time before Basil reached into his pocket and pulled out a pack of smokes.

“An extra one,” Basil said. “In case I can’t wait for the damn thing to unlock.” And with that, Basil popped a cigarette into his mouth and disappeared into the kitchen.