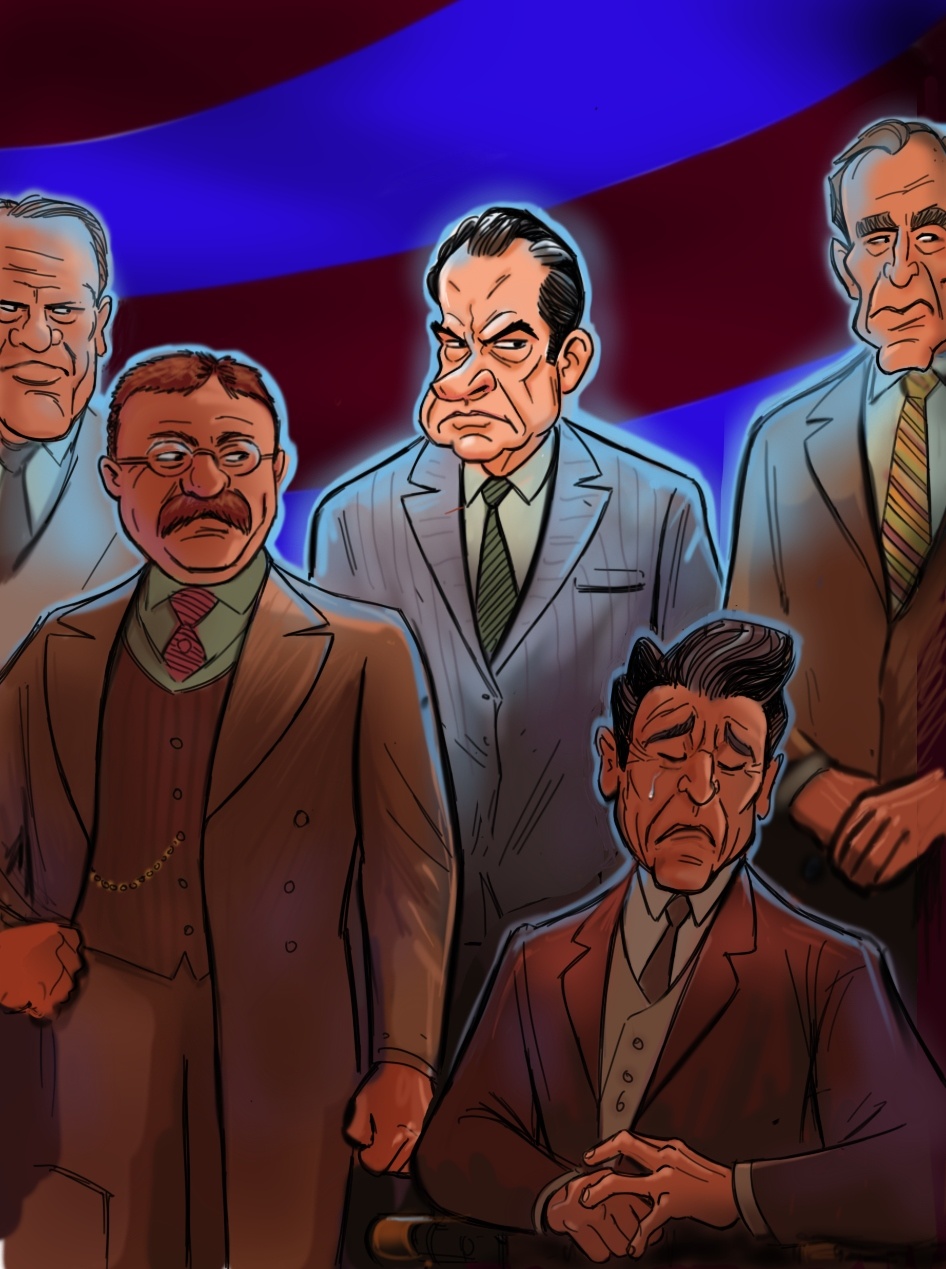 An Audioanimatronic of Richard M. Nixon Awaits the Next Executive Addition to the Hall of Presidents

I’ve been standing here in absolute darkness for months, me and my forty-three counterparts. I can hear the rustling of Gerald Ford’s restless fingers on the hem of his jacket to my right. Below me, Theodore Roosevelt is breathing so forcefully, he may rip his suit. Bottom stage left, Ronald Reagan is weeping uncontrollably.

I happen to be an avatar of the man who was president when this attraction opened in October of 1971. I am jealous of him, though I know he was jealous of Jack Kennedy, even after a sniper assassinated the young Irish politician. The other Richard Nixon could pace the chambers of the White House, trying to find his way into a historical balance, trying to realize the apotheosis of the American experiment.

Trying to justify the trust of the American people.

And later, dressed in the guise of an American president, he could saunter across the beaches of San Clemente, trying to undo himself from the predicament of his conscience, from the fatal mistake that led him to go so far to protect his country, to protect himself.

He could walk. He had his privacy. He kept his counsel in satisfying volition.

I only get to move to a new spot during an executive addition to this program, every four to eight years.

When the governor of Arkansas joined us, I stood right behind him. I was appalled during the first show when the beastly man began to speak. Washington was silenced by this hillbilly? By whose authority? Syllogisms of noxious clichés befouling the presidential seal. The man was a disgrace to the highest office of this great country.

I have never spoken above a whisper, myself.

It was towards the end of Ronald Reagan’s administration when the mental clarity of sentience first dawned on us, when our little tics of existence became extemporized rather than programmed by Walt Disney’s technicians. At first, our collective intelligence was like a school of fish. Then we started to retain our knowledge. The information stream keeps coming to us, year after year, like plants with sunlight. Our growth is inward.

This was long after the man who I am an avatar of declared that he was “not a crook” in the convention center of the giant hotel just outside the Magic Kingdom.

In the beginning, I stood behind a seated Eisenhower. I suppose that may have cheered the actual children of Dwight and myself.

Standing behind Clinton, I learned to tune out the speech and gaze upon the audience, whom I could see for the first time from my new vantage point. The children who are a little bored, and a little scared of us. The veteran moved to tears. The old woman catching a nap. I love my country.

I stood in the same place for eight more years after the son of George Bush joined us. I saw a costumer attach a miniature American flag onto his lapel, as if he might not know what country he was the president of. That devolution of intelligence surely must be one of the challenges of being a 21st century American, that and speeches meant for bored schoolchildren rather than citizens of this great country.

According to the computing systems I am synched to, this present gloom and loneliness has lasted six months. Walt Disney’s technicians extinguished the lights just after seamstresses came in to repair the colored fellow’s suit. He moved a lot in delivering his rather good speech. He’s no Lincoln, but he was good.

Worse than our inertia, though, is what is coming: a half-witted charlatan who doesn’t care or even like the presidency or the American people, who was elected with the sub rosa help of the fucking Reds. He cannot read the Constitution, and therefore cannot make the slightest effort towards his sacred duty to defend it or liberty. He cannot make the slightest gesture towards civility or decency or lawfulness. His animus towards women is grotesque. He is too dumb to avoid looking like a child molester around his kin. He lacks the presence of mind to realize that the press will be his undoing. And he doesn’t have the sense to keep his big, dumb mouth shut. To share the stage and the seal with that gold-plated shit-gibbon will be unendurable.

In this land of fantasy, where the young at heart of all ages can laugh and play and learn together, all would be diminished.

I never got to speak.

They may put me close to the fucker.

This great Hall of Presidents is creeping closer to the sole other attraction in Liberty Square – the Haunted Mansion. I am trying to train my feet to move, to rip from the floor, to walk like my namesake, and make my way there. We all need to be there. The American presidency is a ghost.