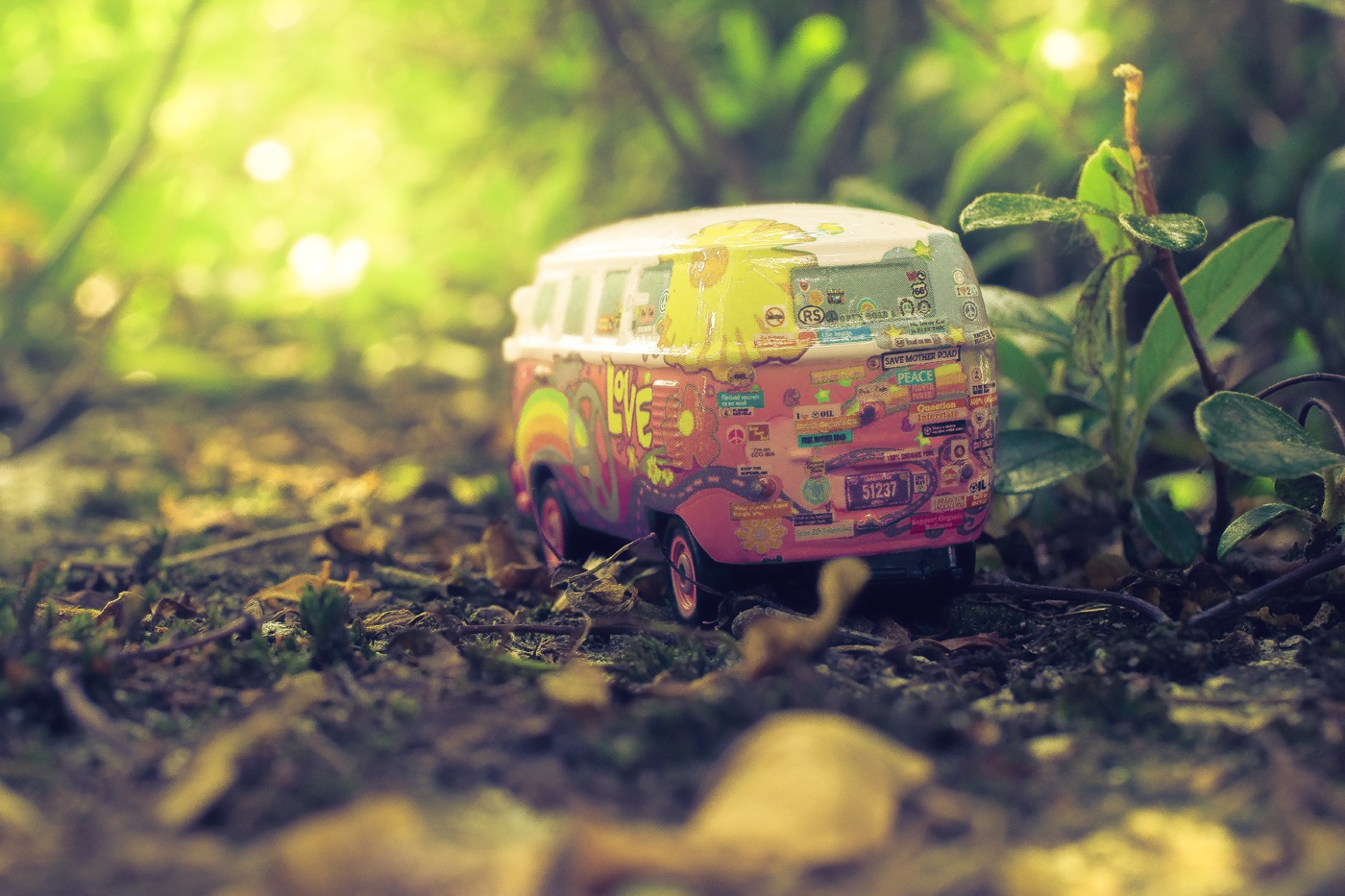 One summer in the early nineties, my father dusted off the sleeve of an old vinyl album and dropped it on his record player; a heady sound blared from analog speakers he had kept pristine since the seventies. From this well-worn system, I had heard mostly classical music— opera, piano and cello concertos, and Gregorian chants—and the occasional wail of Leonard Cohen. But this time was different—my father was playing an album just for me, Box of Rain by the Grateful Dead. He was inculcating me into something special, something belonging to him and his world, a past I had become familiar with only in disembodied pieces. Years before, he had taken my brother and I to pick mushrooms, carved walking sticks at our sides to shake for snakes at the roots of trees. He had showed us which mushrooms were poisonous, the red and white ones, like Smurf cottages, and which ones to pick: chanterelles, morels, and white buttons. My father told us how he had been raised in Sologne, France during the Second World War, that he had picked mushrooms in the forest, trapped rabbits, and caught and killed vipers for sport, and that a village bell had chimed for Armistice. This is how we learned about him, stories fed to us slowly over time, a build-up that was never quite finished, until it was.

Now he was showing me another part of himself. I was thirteen years old, and that summer I listened to the title track of the Grateful Dead album over and over, obsessed as I was with the rain, with melancholy and sadness. I was a teenager on my way to or from, depending on how you look at it, a lost place. Yet I had never felt so strongly that I had been found, rediscovered in the sounds of my parents’ generation—a twangy bluegrass that reverberated from wood-boxed speakers.

The nineties in South Florida was a throwback time. We watched Dazed and Confused, listened to Phish, and the Grateful Dead, and went to shows like Warped Tour and Lollapalooza. I had long, wild hair, was thin as a stick, and tied my cords up with rope to keep them from sliding off my hipbones. In thrift stores, we bought Marlboro t-shirts and pants three sizes too big. In vintage stores, we found macramé, Indian tunics, and strands of bright beads. The stores always smelled the same, burning the incense from the red and blue box, Sai Baba’s Nag Champa. We burned it in bedroom shrines, by the black light and lava lamps, by the stashed boxes where we stored the glassware we purchased at head shops while picking up shades of Manic Panic hair dye that ruined all the towels with magenta, green, and blue. We got our bellies pierced and threaded them with thin chains, bells at our ankles, bells on our toes. I wore my mom’s clothes from the seventies, the cut-off Jordache jeans that rode right under my butt, a blousy pregnancy shirt that fell off my shoulder because I still had a baby face and my clothing never quite fit. A child in someone else’s clothes, dancing to the songs of other times, like a whirling dervish, trying to break free out of one thing and into another, understanding neither.

I smoked too much of what was passed around and thought I was made out of mercury.

I was already smoking pot and doing other things, everything except boys because they scared me. I was a late bloomer in that department, but music was a refuge and the drugs were too: weed, mushrooms, acid, ecstasy, Xanex and Rohypnol, which we called bars and roofies, robotripping, and candy-flipping, which we called “trolling” down south. The only times I truly felt free, I was high, my body pressed against a loud speaker.

I only saw the Grateful Dead once with Jerry Garcia. I was fifteen and they played in Tampa. I wasn’t allowed to go alone, so I went with a friend and her parents, who were soon lost in the melee. I smoked too much of what was passed around and thought I was made out of mercury. The smoke rose off the crowd like ether, the light show depicting some creation myth, Jerry like a fat, weathered God: the show seemed eternal. That night was something I’d seek again and again, with a decreasing amount of success.

The day after the concert we went to Busch Gardens, my girlfriend, her parents, and her grandmother from Kentucky who we pushed about in a wheelchair. She was old and crumpled like a piece of tissue in the hot sun. I don’t know why she was with us, but we kept her parked in the shade while we rode the roller coasters. I shoplifted from the kiosks, stuffing my pockets with agate rings, green malachite rocks, and Chapstick, then snuck off to corners of the amusement park to smoke cigarettes and swallow diet pills. I was the bad friend but I didn’t know it then. When I returned home, I told my parents that I was going to follow the Grateful Dead the next summer. I was going to borrow—or steal—my dad’s VW bus and bring along my puppy dog.

The receding tide, as Thompson called it. We watched it from afar, decades later, my friends and I. We watched it with borrowed nostalgia, devoid of engagement.

I vaguely understood that it had not ended so well for my parents and their generation. They talked wistfully of their friends who had turned shotguns to their heads or overdosed alone in cabins in Montana. They talked about the eighties’ cocaine craze that birthed yuppies and secret sobriety groups, the holy rollers and neo-conservatives who rewrote history with red ink and campaign donations. I had read Hunter Thompson, William S. Burroughs, Ken Kesey, and The Electric Kool-Aid Acid Test. I knew what happened at the end. The receding tide, as Thompson called it. We watched it from afar, decades later, my friends and I. We watched it with borrowed nostalgia, devoid of engagement.

When Jerry Garcia died, my parents were relieved. No stolen VW, puppy dog, or wayward daughter to track across America. But I was devastated. With my idol dead, how could I jump back so far into the past that no one would ever find me? Moored in the nineties, I sought my escapes elsewhere—in other scenes, with other faces. I lost myself faster than I could gather the pieces. It took years for me to return to myself, another decade, many incarnations later, shedding personalities like lizard skin—punk, raver, NYC party girl, rehab and sobriety, the good wife in the family Christmas portrait, SUV mom, now a survivor of a bad divorce, free again somehow. Free but never free.

I have kept my nostalgia intact for that part of my teenage years—sad and broken as I was, even at fifteen—for that feeling of invincibility so long as your friends were by your side, loving them too fiercely to survive adolescence unscathed. Nostalgia for those feelings of hope and despair watching the waves at midnight crash over a drunk ocean, the feeling of everything and nothing, never and always happening, the feeling that a minute was an eternity and high school would never end. The memories replay: sky, stars, wind, sand in my toes, the friend who later overdosed, the girl who disappeared into a black lake, the kids who died in the car wreck, the one who never recovered from the acid trips, the one who became moral and denied it all happened.

A few months after my father died in 2011, I saw Roger Water’s The Wall. During that adolescent summer years before, my father had also played me Pink Floyd’s More, the soundtrack to a film shot in Ibiza in the 1960s. I had learned of Ibiza. I had learned of lost places and wildness. I ran into the wild, but found neither God nor heaven and when I finally came back, my father was dying of pancreatic cancer. After his death, I listened to Roger Waters sing “Mother,” and that was my lament for the passing of time. I burned up my memories that night, raised my lighter to the sky, told God and nobody that my dad was dead, my childhood too, and so were all those adolescent memories in between.