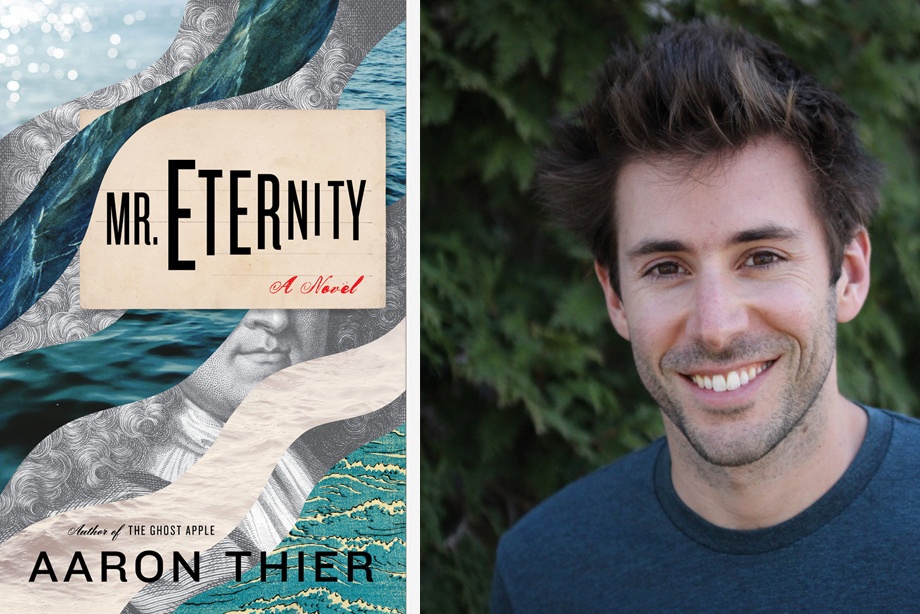 The Drowned Coast: an Interview with Aaron Thier

Aaron Thier’s newest book, Mr. Eternity, is a beautiful novel-in-sections that spans 940 years. The alternating sections take place at specific points in time—1560, 1750, 2016, 2200, 2500—and each one has a dedicated narrator who spends time with the novel’s hero, Daniel Defoe. Defoe is already old in 1560 (he’s described as a “wrinkled conquistador”), and he lives through the entire novel, exploring, traveling, and searching for his lost love, Anna Gloria. Through the years, characters describe him as an “ancient mariner,” and an “old man like a hat-stand with eyes, or a scarecrow totteringly put together, or a jointed insect in a wig.” In the future passages, when Dan is almost 1,000 years old, he is “all one piece like a hinge rusted together.”

If Defoe is to be believed (and he isn’t, at least not to the letter), he sailed with Christopher Columbus, sat on King Arthur’s court, escaped the Spanish Inquisition, and traveled with Lewis and Clark. His tales are woven through with exaggerated or false details that make the stories better; he and the Columbus crew nicknamed the Santa Maria the Dirty Mary, he claims. As the Lewis and Clark party moved through St. Louis, there were herds of wild camels. He claims he killed Magellan, saying, “he was a tyrant. We drew straws.”

The novel opens in present-day Key West, where Defoe has made a home because his boat (which he lives on) washed aground in a storm. The Key West sections are narrated by an unnamed 27-year-old man who is ostensibly filming a documentary about Defoe and wrestling with how to live a meaningful life on a planet going to shit. He broods on what future Earth might look like: “There would be avocado trees in Washington, D.C., Spanish moss in Boston, wineries in Greenland. Key West would be underwater, and New Orleans and Miami and Lower Manhattan as well.”

And unfortunately, he’s right. Rising sea levels loom in 2016, and by 2200, much of the United States is underwater. The evolution of “the drowned coast,” as Defoe describes it, is made very concrete because we see it unfold over the centuries. The narrator in the year 2500 describes the lay of the land like this: “Instead of the old state of Louisiana, there was a shallow bay called the Delta Bay, and Florida was lost beneath the sighing seas, and the Bahamas as well, and also the cities of the Atlantic littoral.”

One of the primary strengths of the novel is the variety and depth of the characters. Each section is narrated in first person with a voice and speech pattern distinct to century and place. The novel’s structure with its rotating storytellers functions to preserve the mystery of the true main character, Defoe. He is never the narrator; we learn about him solely through the other characters’ perspectives. Because Defoe’s story is told “secondhand,” the workings of his mind are obscured, and he remains unknowable and epic.

Mr. Eternity reads like a cerebral version of a classic adventure novel. There is buried treasure, shipwreck, feasts, prostitutes, a quest for a long lost love, the open sea. Nothing is beyond its scope: It’s about the history of history, the nature of thought, truth. Past and future characters struggle with the same issues: slavery and racial inequality, privilege, patriarchy, cultural identity. The alternating sections in their different voices give us examples of how these ideas carry across the centuries. Characters also wrestle with the relationship between language, time, and the limitations of memory. The 2016 narrator says of memories, “they’re a story I told myself about my own life.” One of the tasks of Mr. Eternity is to portray individuals trying to make sense of their own lived history.

And yet the novel is grounded. The big stuff, the ideas, plays out in dialogue and scene, hilarity, aspects of daily life like food and sex, and the very real personalities of the characters.

This book is a perfect read. It’s serious and fun—almost as much fun to write about as it is to read. But I’ll end my celebration here so we can hear from the author. I interviewed Aaron Thier about his living in and writing about Florida.

Rebecca Evanhoe: Tell us about your relationship with Florida. I believe you’ve lived in the swampy part and the beachy part, which makes you well-versed in the variations of Florida lifestyles.

Aaron Thier: In North Florida you’re in the deep south; the memory of slavery is recent and its effects are everywhere, and that was alarming to me when I arrived. “Haile Plantation” transformed unapologetically into an upscale housing development, for example. At first I was very angry, but I also loved Gainesville, the moss and the cicadas and the cool bright winter. I could never really sort it out. I was living day to day with this awful history and I was feeling very positively about the place at the same time. It became a subject for fiction, which doesn’t have to sort things out.

In South Florida the situation is very different, though, because the city is so recent, and there’s no visible manifestation of the region’s history. Miami wasn’t incorporated until 1896. It’s a wild, headlong, globalized 21st century city. It’s also a place where the U.S. overlaps with the tropical third-world, and you think about these global connections as a matter of course. Where do our sugar and bananas come from? What’s going on in Venezuela right now? And so on. Less an American city than a Caribbean capital. For me the climate was a revelation too. Living with a totally different suite of plants and animals, learning a new seasonal rhythm. And since I was writing this book about climate change, that was an invaluable experience. The future looks substantially Floridian. Coconut palms in the Carolina low country; Spanish moss up there in New York.

RE: By my count, 25{f601acc48c7c49652e30f2fab106e7de4a69edf8d5e7b04da5e5a3c80b338d5d} of Mr. Eternity is set in present-day Key West, where it’s portrayed as beautiful but full of cartoonish characters. Why choose the Keys as one of the primary settings, instead of another coastal town like Miami—or even a landlocked one like Gainesville?

AT: I guess the vulnerability of the Keys is the main thing. They are not going to last; they will be gone very soon, in a few generations. It’s too horrible to think about, and you have to think about it, which is the narrator’s whole problem. So Key West is a place where his internal struggle is externalized.

But Key West is also important because it’s the only place in South Florida with any kind of antiquity. Some old houses—or old by Florida standards. A cultural identity that’s remained sort of intact for sort of a long time. It’s the only place down here that registers on Daniel Defoe’s radar, so to speak. Miami is much too recent. To him Miami looks like an arepa truck that just appeared on the corner this morning. And Gainesville belongs to a different world. Daniel Defoe is a sailor, after all, and belongs in a sailor’s town.

RE: For both of your novels, I loved reading the Acknowledgements where you list the books that informed or inspired your work. The text of your first book, The Ghost Apple, even quoted from historical texts on outdated medical practices. For Mr. Eternity, you read about climate change (The Once and Future World), 17th century medicine (The London Practice of Physic), even Marco Polo’s Travels. What research did you do on the Keys and greater Florida?

AT: There’s a famous book, William Bartram’s Travels, and then there’s the narrative of Cabeza de Vaca, part of which takes place in Florida. But since the Key West sections are set in the present day, tactile familiarity was more important. I learned what the plants were called because I lived with them. I was waking up every day in South Florida and sniffing the air. We visited all the important historical sites in the Keys and in St. Augustine, and they were real places, not places in books. These are the sections that come directly from my experience, so it wasn’t so much that I was doing research as I was living my life and then boiling it down into fiction.