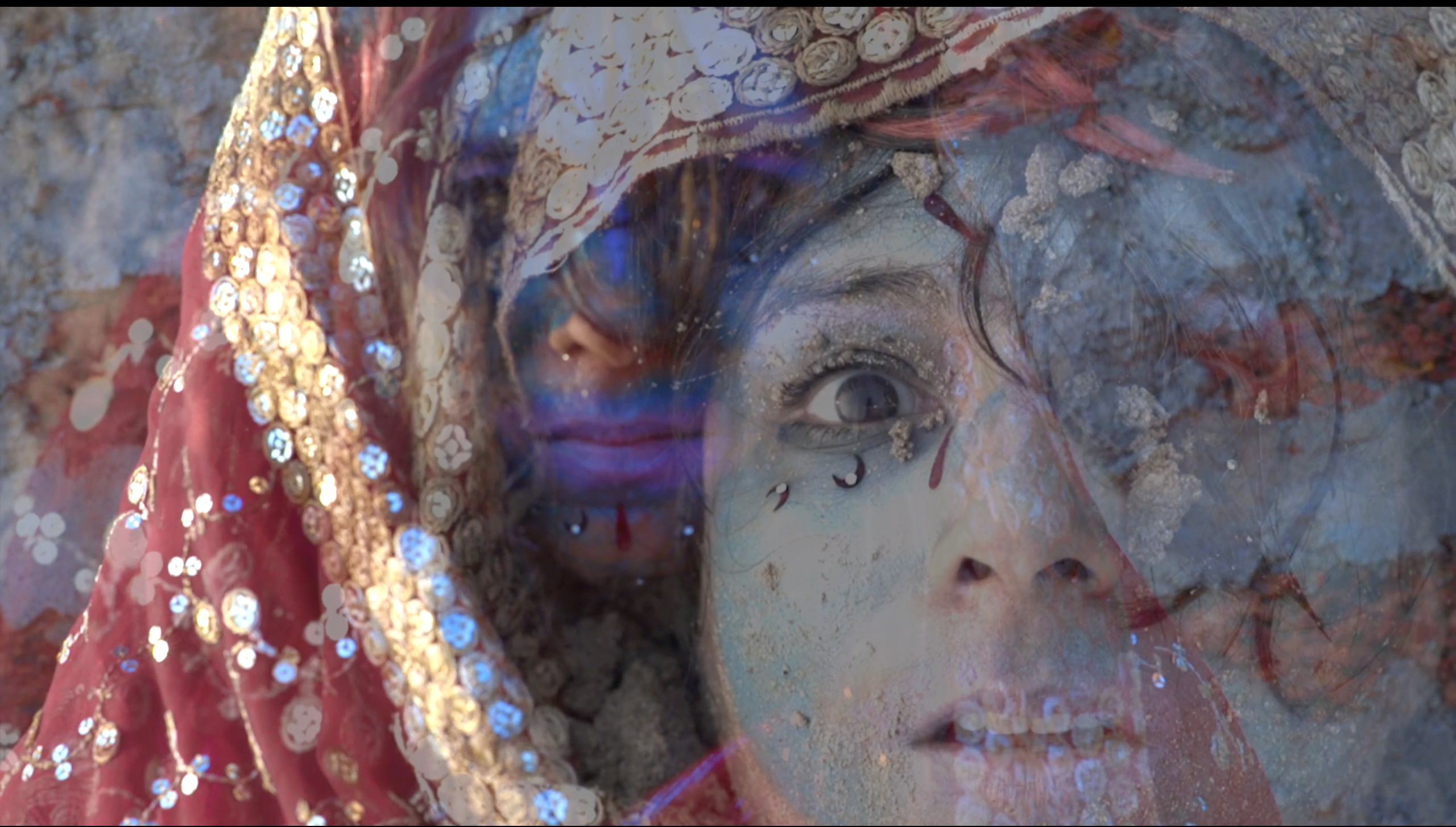 An Interview with Vidhu Aggarwal

Vidhu Aggarwal is the author of the poetry collection The Trouble with Humpadori, and the founding editor of SPECS, a multi-media journal. She is on the executive board of Thinking Its Presences: Race, Advocacy, Solidarity in the Arts, and teaches poetry and postcolonial/transnational studies at Rollins College in Winter Park, Florida. Writer Cathleen Bota spoke to Aggarwal about her latest book, and bringing disruptive multidisciplinary projects to Central Florida.

Cathleen Bota: There’s been recent upheaval in the literary world, particularly in the avant garde/ experimental poetry realm. I think of Cathy Park Hong’s essay “Delusions of Whiteness in the Avant Garde” when she states: “The encounter with poetry needs to change constantly via the internet, via activism and performance, so that poetry can continue to be a site of agitation, where the audience is not a receptacle of conditioned responses but is unsettled and provoked into participatory response.”

In the past year you’ve actively contributed to this much needed change and, excitingly, you’ve done a lot of it in Florida. Thinking back to Memorial Day 2015, you participated in the John Sims project “13 Flag Funerals” coordinated by Julian Chambliss. Can you describe this event, your work in it, and how it informed future projects?

Vidhu Aggarwal: Working on the John Sims project “13 Flag Funerals” has allowed me to think about a way to confront my own disgust and nostalgia for the South—something I’ve had a difficult time doing directly in my writing. I had this idea that when I got to Central Florida from LA, I would work out my ambivalent Southern history in the swamp and heat. My family (of immigrants from India) had moved from the Northeast to Louisiana when I started school. You could say I was instructed from a very young age in a twisted Gone-with-the-Wind style Civil War imaginary where hostility towards African Americans and “foreigners” was overt. Coming to Orlando, many people around me insisted that Orlando is not the South. I began having an ongoing conversation with Julian Chambliss, a historian and colleague at Rollins [College], about the way Orlando and Florida features in the public imagination a type of terraformed paradise—a vacation destination— without a sense of the ongoing racialized violence and its deep history.

When Julian asked me to participate as a poet in John Sims “13 Flag Funerals,” I was fascinated by the scale of collaboration in dealing with the racialized Southern imaginary. Sims coordinated a simultaneous burning and burial of the Confederate flag—a visible symbol of white supremacy—in 13 southern states during Memorial Day and livestreamed the events. In Florida, members of the community gathered together in a public park. Since we could not legally burn the flag in the park, I decided to take on the persona of the fire, performing a poem in the voice of Agni, the Hindu god of fire (rewriting “I wish I were in Dixie” as a bhagan after John Sims’s own Dixieland remixes). We invited folks to scoop out the ashes of this flag (burned elsewhere) from a jar and release them into a nearby pond. For me, this ritual was moving for many reasons. It momentarily enacted our communal participation in maintaining a mythology of whiteness pervasive in the U.S. and the U.S. South, and acknowledged the necessity of communal participation in dismantling white supremacy. We cannot go at this alone. I was also heartened at how many people turned up, despite some threats of retaliation by a local group. News reporters appeared to focus on a lonely pair of bedraggled protestors, mostly ignoring the enthusiastic crowd of participants. I thought of the John Sims’s event as creating a type of momentary, powerful anti-racist vortex.

I always feel like I’m betraying the book out of necessity!

CB: Your book The Trouble with Humpadori was published by The (Great) Indian Poetry Collective in January of this year. Can you describe what life has been like after publication? You’ve also created accompanying work to the world of Humpadori, including comics, video, and performance. Can you discuss some of these projects?

VA: Let’s just say, I always feel like I’m betraying the book out of necessity! At the heart of the book is a shapeshifter, Humpadori, a being who defies categorization, a type of avatar of the racialized migrant body. So, when I’m translating work into other mediums, I don’t want an exact one-on-one correlation with poems. The poems themselves in this way are migratory, cellular seepages, in which part objects or lines are unfaithful to their origins (metonymic failures). The videos in particular produce a sonic landscape around Hump remixing the lines and order of poems. In some of the video work and performance, Hump appears as a disheveled god—like a bumbling Shiva—in attempt to signify Hump’s potential for multiple incarnations across gender forms and bodies. This “picturizing” also borrows from Bollywood soap operas about gods—a genre I grew up with and loved. This Shiva figure actually comes out of another manuscript, Avatara—so it blurs Humpadori and a more recent project—yet another betrayal!

In our comic collaborations, I gave Bishakh Som license to disrupt line breaks at will. In performance, the comic skits in the book are often improvisational. At the same time, these performances, videos, and comics have indeed altered the shape of certain poems. After seeing some of Bishakh’s comics and illustrations of poems, I wrote new poems specifically with Bishakh in mind with meandering knots and tubules and fleshy cosmos.

CB: In your VIDA essay “‘I’m nothing, if not’: An Anecdote of a Jar” you mention wanting “weirdness” and “bite” in your work. Florida can certainly be a weird and unexpected place, especially when thinking of it as a place for experimental poetics. How does Florida inform your poetics?

VA: I want to say: I feel like this Humpadori figure could only be born in Florida, with its stinky rot, heat, perpetual growth, impossible weeds, and decay.

There is part of me that really wants to bring a version of the Black Mountain School to Rollins.

CB: SPECS, a hybrid literary arts journal affiliated with Rollins College in Winter Park, FL, was launched by you in 2008 and recently released issue 7: Unicorn. How has SPECS developed and what do you hope for its future?

VA: In 2008 when I started SPECS, Orlando and Central Florida did not seem to have much of a place for “experimental” poetics and art practices. In a DIY way, I wanted comrades. So SPECS started at Rollins—a school informed by a pragmatic cross-disciplinary education—as a way of integrating art practices (poetry and visual arts) with thinking across disciplines (critical practices). There was a precedent for this type of artistic hybridity across fields at Rollins. The founder of the Black Mountain School, after all, was a professor from Rollins. Students worked on the design, look, and feel of the journal. We had really funky issues. The first was called “Homuncular Flexibility” after visiting scholar Jaron Lanier’s term for forms of virtual identification, allowing us take on the sense properties of other animals, such as dinosaurs or birds. For the latest Unicorn issue, Kristen Arnett took over as editor and I feel a new monstrous energy at work—youthful, rebellious, and fabular! We have the work of Rajiv Mohabir, who grew up in Orlando, queer, South Asian, Carribbean. Lo Kwa Mei-en, Megan Milks, JD Scott! And you, Cathleen, as poetry editor, have much to do with the crafty, interactive feel of this issue—as do Sarah Castro and Jennifer Valero, our wildly imaginative crew. What I hope for SPECS is that it offers a way for our own community here to shake up our aesthetic possibilities.

CB: Earlier this year you brought avant garde poets Bhanu Kapil and Ronaldo Wilson to Rollins for a weekend of performative poetics. It was a disruptive event in the best way, disruptive for Rollins and the Orlando art scene as a whole. One of the performances was held publicly in the Cornell Fine Arts Museum, solidifying the event’s interdisciplinary nature. How did this visit inspire you and your own creative process? Do you plan on organizing more events like these?

VA: There is part of me that really wants to bring a version of the Black Mountain School to Rollins, in which members of the community make art alongside other artists across disciplines: dance, painting, writing.  I had a dream of transforming the space of the campus in a way that allowed us to consider the structural violence present within our own institution and perform group exorcisms. I had seen the work that Bhanu Kapil and Ronaldo Wilson had done towards this end in other institutional spaces at conferences. More anti-racist vortexes! Bhanu and Ronaldo are individually very powerful poets–with improvisational practices that feel like cosmic disruptions. I don’t say this lightly. And they are truly multi-disciplinary artists—dance, bodywork, video, performance, painting, sculpture. I asked them to help me conjure up a force field, no less! I remember thinking—what will happen when Bhanu and Ronaldo combine forces? Will the egrets to explode! Toward the end of the weekend extravaganza, Bhanu and Ronaldo worked with students and the public on an “operatic nest” behind the Cornell Museum in which we collectively marked a perimeter on the grounds of the institution that became a temporary space for improvisational play—intimate, strange, and tender. Spanish moss, grass, textiles, and sticks.  Maybe you can describe it!  Another world opened up. We were living out a pastoral of mixed up identities and leaky borders with dance, performance, reflection. And then we took apart the nest space, released our nests into Lake Virginia, and went home. But no one wanted to leave or go back. We had for a small moment moved beyond logic of surveillance and assessment—the everyday operations of our institutional life, however privileged these conditions are. There are many people both within and without Rollins that feel excluded from the promises the institution represents.

I feel altered by this experience.  I want to introduce more improvisation into my own work and practice.  I also hope to bring other innovative poets and artists into town: Douglas Kearney, Julie Patton, John Keene, and Tonya Foster to name a few.