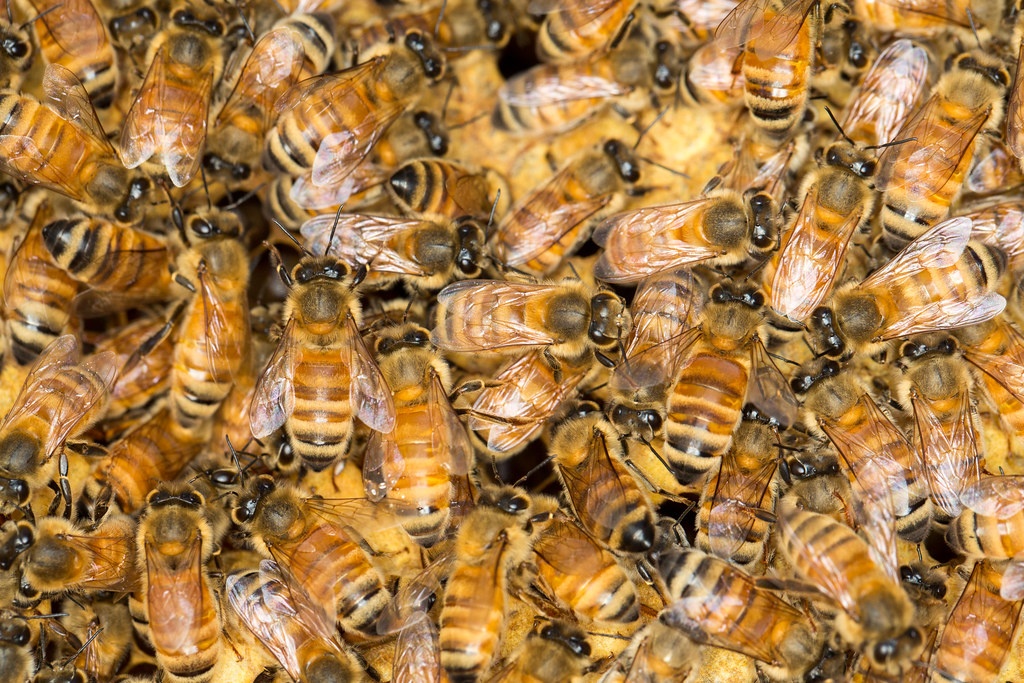 “I found a new place to hide the bees,” she said. After much silent deliberation, a smoke, and a pack of Planters nuts, Delle said this, leaning down to rub the spot just below her belly button in a circular motion. “It’s in my stomach,” she said, smiling. Small bits of Planters nuts were stuck in every crevice of her teeth.

“That’s not your stomach,” I said, starting to pick at my own teeth from the anxiety of it. Little yellow pieces of nuts, like bugs, like the innards of a single kernel of corn, stuck to her dark gums and hung at the edges of her lips.

“Well, you know,” she said. “Here.” She had a look in her eyes of deep admiration, fondness, almost, like the thought of having a baby someday in a future distant enough to harbor only fascination, and not a hint of worry.

But she was having a baby. It was the first week into her second trimester, and here she was, smoking a cigarette and filling her stomach with bees. I didn’t say a word about the smoking. We were long past that. Months ago, when she first got the news, she called me crying – happy and sad and anxious and flustered. All of the emotions of a child, fresh out of its mother’s womb, meeting the world for the first time.

“No more drinking,” I had said. “And throw out your cigarettes. Into the toilet.”

I felt silly making this statement, caring in that harsh, motherly way. In that moment, I remembered the time I stood with my arm outstretched over the toilet in the old half-bath, my own mother’s Marlboros crumpled in my hand. I was seven, maybe, and I loved my mother. I don’t actually know how old I was. Memory is like that in those early years. Still, foggily, I recalled turning back, smoothing out the crumpled pack and placing it quietly back in my mother’s purse – but not why. Was it fear? I suppose that’s what my mother felt, raising a young girl with cigarettes, no husband,  diet soda, and other vices. She never said anything about it. I looked at Delle and tried to picture her as a mother, and I saw honey in her eyes, pollen clinging to her hair, her mouth blowing smoke like soft bubbles floating up and on. Vices make a mother look so sweet.

“It’s like this,” Delle said, even more determined, her hand done rubbing her tiny mosquito bump and back into the pack of Planters, looking for crumbs. Her baby would be the size of a lemon now.

“You set two in there, maybe three. You don’t want them to get lonely. You know, they wander around, dance their little jig, sniff you like a dog greeting another dog. And then… they just start building.”

“Building what?” I asked, opening the cap of a diet soda with a click-hiss.

I imagined her body as a hive, bees swarming in and out of her through her every opening. Bringing back sticky clumps of pollen on their hairy legs. I imagined her abdomen growing swollen with them, little wings flapping against her ribs, causing ripples like the surface of a dodgeball. Would she have stretch marks?

“Will you have stretch marks?” I asked.

“What about the baby?” I said. I was always asking questions.

“I mean, will there be enough room?”

I reminded her of the time we sat in her bathtub, too small for the two of us, both in bathing suits and in our twenties. We were drinking wine and reading Sylvia Plath out loud. We were switching knowingly every paragraph, like playing popcorn at school, when a palmetto bug the size of a key lime jumped with fluttering wings and landed on Delle’s knuckles. She shook her small hand violently like a child with its thumb slammed in the car door, and the bug escaped, flying again into the depths of an open wicker basket holding magazines, toilet paper rolls, and not-quite-dirty laundry. We ran out of the bath still dripping. Her father offered us oven-baked chicken.

“I guess I imagine the bees kind of like that,” I said.

“Bombus affinis,” she said, leafing through pictures on her laptop and pulling up endless tabs. It was her third trimester. Baby size: head of purple cabbage.

“The rusty-patched bumble bee. See, right there,” she said, pointing with a greasy finger, bent at the topmost knuckle, leaving a smudge on the screen. The smudge lingered over the fuzzy, brick-red back of a bee, hovering over an innocent white flower. “It’s like a stain. Like blood.”

This was Delle, my friend since childhood. We used to sit in her room and color our nails with my mother’s wedding polish, and then we used to sit on her bathroom toilet, lid closed, her legs crossed over mine to pluck my thick eyebrows into lines, and then we used to sit on the back porch and drink wine from the box, throwing chewed sunflower seeds into the lawn. I knew her, but now she was showing me what was literally inside of her. She sat back in her chair, satisfied. In everything she did, she always had this air of satisfaction, like there was nowhere else she should have been, nothing else she should have been doing. I was always jealous of that.

The bees had moved in. From her sternum to her pelvis she was rounded like a barrel, and sitting close to her, I could hear a faint buzzing, like hearing the soft, constant ticking of a wristwatch. It was enticing. She had small protrusions in odd places, little golf-ball cysts around her intestines, poking out from her spine, a consequence I can tell she wasn’t prepared for as she made polite efforts to pull her long shirt down around her.

“What are those?” I asked, without tact. We were long past that.

“They make their nest how they want it,” Delle said, with a smile more like a grimace. “You know, the rusty-patched bumble bee, it doesn’t make hives so much as burrows. They’ll take the unused, abandoned rodent hole, the ditch on the side of the road, the skeleton of an old, cloth armchair. And they’ll invade it. Make it home. I bet they’ve explored my body more than I have.” She tittered.

“And what about Lilly?” I said, darting my eyes down to her belly, distended with pregnancy. “She sees you, too.”

“It’s kind of sweet,” she continued. “She hasn’t touched them, not one bit, even when they kick around. Here, feel.” Delle grabbed my hand and pulled it to her stomach. It buzzed through my palm like power lines, vibrated like sitting on a dryer. “They’re like children. They dance all funny. They build with their little blocks. They get finicky. Sometimes they sting. But they give you something sweet, something warm.”

The sound was getting louder. It pulsed through my fingers.

“You know what I think,” Delle said nervously. “I think she’s their queen.”

I walked with Delle to her appointment. They called it an extraction. They offered it everywhere now.

It exploded like a movement, came as easily as any other, like becoming a vegan. Women everywhere had stomachs like hot air balloons, cysts like small planets across their chests and backs, the occasional sting, swollen and pink, worn like a badge. It was something men were looking for, but not really, like the girl who doesn’t wear makeup, the one who makes him laugh.

At Planned Parenthood, I sat with Delle in the waiting room. I fingered through leaflets on the table between us.

“See this? 10 Questions to Answer Before Asking Your Doctor About Viagra. Number one–”

“It’s easy,” she said, as if she were comforting herself. “I just have to say I’m ready, and then they’ll say okay, and just take them out.” She wasn’t looking at me. When they called her name, I answered, and the two of us walked back through the heavy, frosted door.

There were posters lining the walls in the doctor’s office. What Is Hypertension? Extraction: Is It Right for You? Early Signs of the Zika Virus. A stack of small pamphlets that just said PAIN in capital letters, with a question mark. Another pamphlet titled Leading the World Into the Future. I paused to observe a smiling family on the cover. They looked normal, happy, slightly blue-green, like the color of algae. Something new. I put it in my bag.

“There’s plenty of them now,” I said, squeezing harder. “Too many.”

And she had to agree with me. The bees almost went extinct, but now they were everywhere, living in the recesses of mothers and daughters across suburban America.

When the doctor walked in, it was like any other visit. He joked, laughed. He stood a little too close. He said, I guess they’ve got to leave the nest sometime.

Lilly came out and smelled like honey. She never cried. She started walking at six months.

Delle and I were sitting on her back porch, as we did, having a coffee, a glass of wine from her box, a glass of water. Cups lined the table like candles at mass. Droplets were sweating from every cup in the midday sun, falling through woven splinters of wicker onto our knees. Lilly was inside, standing as she played with her toys. I didn’t know any kid who played with their toys while standing. I told Delle this. She nodded.

“I miss them,” she said, “all being inside of me.” She circled a wet fingertip on the rim of her glass of wine, making it buzz with a light musical ring. “They were so little.”

Just then, a tiny bee landed in my glass of water and rested its rusty back on the ice. It did not move. It did not buzz. And I did not tell Delle.

She turned to me, and before I could let her see, I lifted the glass to my mouth and swallowed. Ice with thorax, cold abdomen, wings, legs dripping with wet pollen, immobile. The bee was dead, the last one.

It’ll take a while, the doctor had said that day in the office. Take this pill today, and then another in one week. In three, the last of the bees will have moved out.

But they didn’t move out. At least, we didn’t see them. Not one crawled out of Delle’s open mouth, left its honey scent on her nostrils, scuttled through her ears. Their drone became fainter and fainter until there was no difference between the buzz and everything else. They may have still been there for all she knew, only silent, like they had finally gone to sleep after a long thunderstorm.

And me, I have this strong spot, this patch of fur, orange in the sun, just below my shoulder blades. I can see it in the mirror now. I can reach it if I stretch my arms really far, and I do. I can feel it even, soft like peach skin, but mostly I just know it’s there. It’s my little rusty patch.