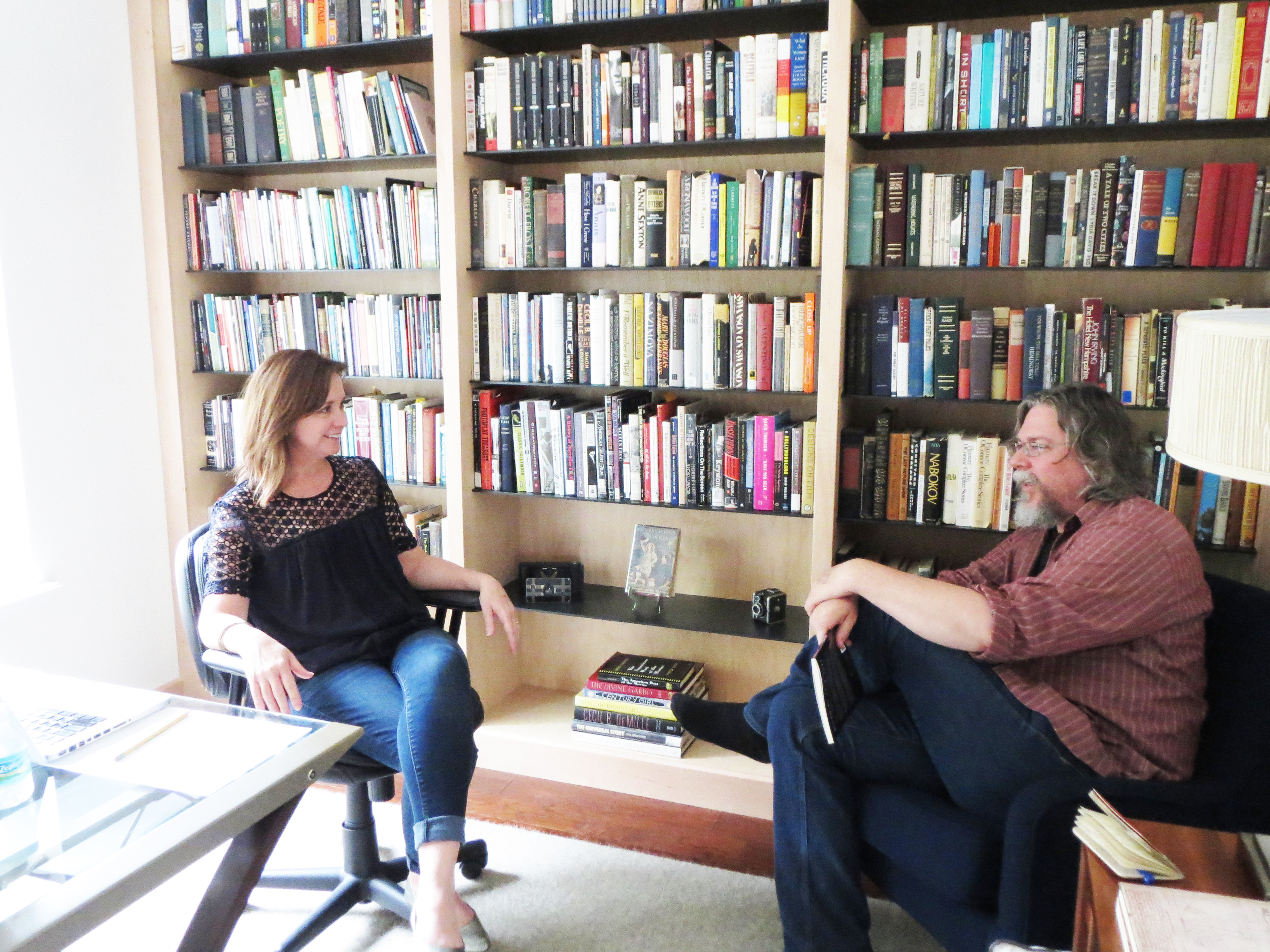 I meet Teri Youmans Grimm at her home on a small island where salt marsh meets the St. Johns River near the Intracoastal Waterway. I’m here to talk about her new collection of narrative poems Becoming Lyla Dore. Lyla is a fictional film star in Teri’s sequence of narrative poems set in the Jacksonville of the silent film era, when more than 30 film studios headquartered in Jacksonville shot about 300 movies between 1909 and 1926.

Tim Gilmore: How long have you lived out here?

Teri Youmans Grimm: About eight years now. There are alligators and dolphins, manta rays and manatee.

TG: It seems like the perfect place for you. So much of your work is so earthy, so chthonic. I mean, you have a collection of poems called Dirt Eaters.

TYG: It’s funny. Though I didn’t realize it when I first wrote the new poems [in Becoming Lyla Dore], dirt and ash and dust come up repeatedly. I didn’t even realize all the references to doors and thresholds, though Lyla’s last name is “Dore.”

In the poem, “Star Dust,” the dust refers to early silent film stars whose movie reels were left to disintegrate. There’s a line in the poem that comes from something Gloria Swanson once said: “We were supposed to be / immortal.”

TG: It’s ironic, isn’t it? One of the functions of art is immortality. We still read Shakespeare. We talk about a “body of work,” or a “corpus.” But so many of the early films didn’t deny the natural cycle of things after all. They became dust again.

TYG: Lyla Dore herself is conceived in fire and meets the death of her legacy in ash. In one poem, Lyla’s mother describes how a stranger raped her in Jacksonville’s majestic Windsor Hotel during the Great Fire of 1901.

Sparks landed like confetti, but long I was willing
to stay there and watch this parade of danger so close
he brushed it from my hair and I brushed it from his sleeve,
before he clutched my hand, pulled me with the others
past Hemming Plaza, into the Windsor Hotel crowded
with the displaced, belongings stacked everywhere,
then down a corridor into a room.

TG: Lyla’s story is fictional, but the historical background is real and heavily researched. What are some of the poems that breathe new life into real Jacksonville events?

TYG: There are lot of them. “When Theda Bara Came to Town” describes the arrival of Hollywood’s original “vamp” at the Rialto Theatre. “The Filming of The Clarion” deals with one of the events usually mentioned as leading toward the film industry’s ouster from Jacksonville. The movie called for paying 40 policemen as extras in a riot scene, and while they weren’t allowed to harm anyone, the extras who played rioters nearly destroyed the saloon where they were filming on Davis Street.

Then there are the two poems “When Kalem Studios Came to Town” and “At Kalem’s Headquarters, the Roseland Hotel.”

TG: You focus a great deal on Kalem.

TYG: They were a very influential studio. Also, they came from New York and made a whole series of films that both pandered to the South and made fun of it. They shot a number of Civil War movies that focused on the Confederates winning battles, but they also made a number of films called The Sunny South or the Florida series. They had titles like The Octoroon and A Poor Wife’s Devotion. The films supposedly concerned Cracker culture, but they caricatured the actual Cracker people.

TYG: That’s true. Kalem’s film A Florida Feud; Or, Love in the Everglades is set just outside Jacksonville, though the Everglades are 300 miles away. Kalem called it a “very faithful portrait of conditions which exist in certain portions of Florida today.”

I mean, on one hand, I know, I’m from the South. I know how ugly it can be. I know the racism and the backwardness, but it’s one thing for me to write about what I know and try to capture it faithfully and another for a New York film studio to set up shop here and caricature it.

TG: It makes you wonder which Florida is the real Florida.

TYG: Yes, exactly, and I think you can trace early representations in Kalem films all the way up through documentaries like The Muleskinner’s Blues and Florida Man.

TG: That’s fascinating. So Florida’s a strange place, no doubt. There’s a chapter in Anne Rowe’s The Idea of Florida in American Literary Imagination that takes its name from a Marjorie Kinnan Rawlings description of the Florida mood. It’s called “An Enchantment Slightly Sinister.” But you’re saying there’s a lineage of outsiders defining Florida as more than just Southern Gothic, as a kind of inbred freakshow? That would explain why the film Florida Man, by a New York director, is so different from the Twitter feed. The film features hard drug use and street-side deathbed alcoholism which, unfortunately, you could find in any other state.

TYG: I love that title—”An Enchantment Slightly Sinister”—it goes along perfectly with how I think of my home state. I don’t know if “inbred freak show” is too strong? But I do think there’s something that’s become part of the collective imagination/perception about Florida and its inhabitants that’s easy to exploit. Certainly we can be our own worst enemies at times. For instance, New York born Erroll Morris’s 1981 documentary, Vernon, Florida, was made after he heard about this town (Vernon) that had the nickname “Nub City” because of folks who would amputate limbs in order to receive payouts from insurance companies. How can one hear that and not think that these people were “freaks”? He ended up focusing on other eccentricities of the area after receiving death threats from the members of the “club” who didn’t want their scam uncovered. But still, even with people like this, there’s a line between extreme characters and caricature. What gets my ire up is when people who are already marginalized in some respect are further marginalized, presented in a way that strips them of their humanity. I mean, I get it, a group of people who would willingly have their limbs blown off just for a few thousand dollars seem rife for exploitation. But there are certainly layers to that story beneath the dark absurdity. I’m not saying that “outsiders” shouldn’t use Florida eccentricities as subject matter—that’s ludicrous. Or that Erroll Morris’s intention would have been to make a cartoon of those people—but there are often larger cultural contexts that are ignored or perhaps misunderstood that are an important part of the story. The part that allows even people living on the edges, some manner of dignity.

Some details in this poem came from an article written by the silent film actress and screenwriter Gene Gauntier for The Women’s Home Companion and published in 1928. Kalem first came to Jacksonville in 1908 and was the first film company to set up shop in Jacksonville. It didn’t take long for others to follow suit, inevitably making Jacksonville the “World’s Winter Film Capital,” with 30 studios making films.

This poem borrows details and phrases from Acres of Ashes by Benjamin Harrison published in 1901. This book provides an account of “The Great Fire of 1901” that destroyed 146 blocks in Jacksonville.

Teri Youmans Grimm is a fourth generation Floridian and author of the poetry collections, Dirt Eaters and Becoming Lyla Dore. Her writing has appeared in Prairie Schooner, Green Mountains Review, Indiana Review, EAT and Homegrown in Florida: An Anthology of Florida Childhoods, among other journals and anthologies, and she is a contributor for the podcast, Swamp Radio. She is the recipient of a Nebraska Arts Fellowship and has been awarded residencies at Virginia Center for the Creative Arts and the Hambidge Center. She teaches in the University of Nebraska at Omaha’s low-res MFA program.