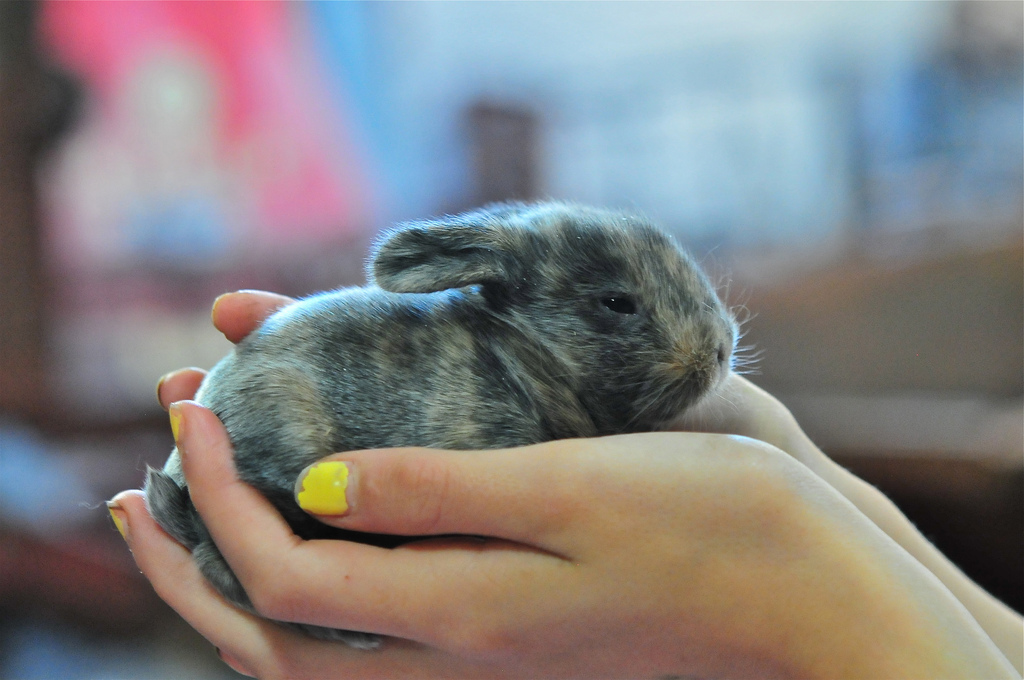 He watches as the woman makes her way across clumps of dirt, weeds, and the tangle of grass that passes for lawn. When she’s near him, she hesitates a moment, adjusts the thing she’s carrying, and steps onto the porch where he sits with a mug of coffee and pack of cigarettes.

“Isn’t it cuuute!” she says, cup-snuggling a bunny in her hands, looking up at the man, then back at the small bundle, extending her arms, holding the tremble near his cheek. The man yanks his head away, brings his torso with it. He smells like work, but he hasn’t been to work yet. “Aww. The wittle baby,” she says in her baby voice. Her fingers brush his cheek, their bones like porcelain sticks.

The man readjusts himself in his chair. “Don’t look like much of nothing,” he says, jotting a period with his chin. “Its eyes is even closed.”

“Well sure!” She looks at him. “It’s a wittle ba-by.” She cradles the bunny to her neck. Her ring is thin and gold and has a small, dull diamond in it.

The man snorts. “Good way to get eat up,” he says. “With your goddamn eyes closed.”

The woman hums, her head bending over the softness in her hands. She smiles at the man. She had seen something in him and, as women sometimes do with men like that, worked to bring it out. She smiles at him again. The bunny flutters like a heart.

The man drops an umbrella of fingers over his coffee, makes a dark noise. He sets the mug down on the railing and rises and steps around the woman and walks out into the yard, toward the makeshift bunny hutch, a discarded shopping cart on its back, and spins the front wheel, watching as if he’s playing roulette. It mewls and stops before a full revolution. He stares in at the huddled bunny parents.

He and the woman live a quarter-mile from Tire America. His shift there begins in forty-two minutes. He walks back to the porch, picks up the pack of cigarettes, pulls a set of keys from his pocket and dangles them from a pinkie. “I’m going.”

“Maybe.” He heads down the walk. Behind him, the woman squeezes her eyes tight and kisses the tickle of fur five, six, seven times.

Out on the street, the occasional maple pushes into bloom. The man swings the car wide from the curb, grabs the steering wheel hard. Needles of sun scatter from the ring on his finger.