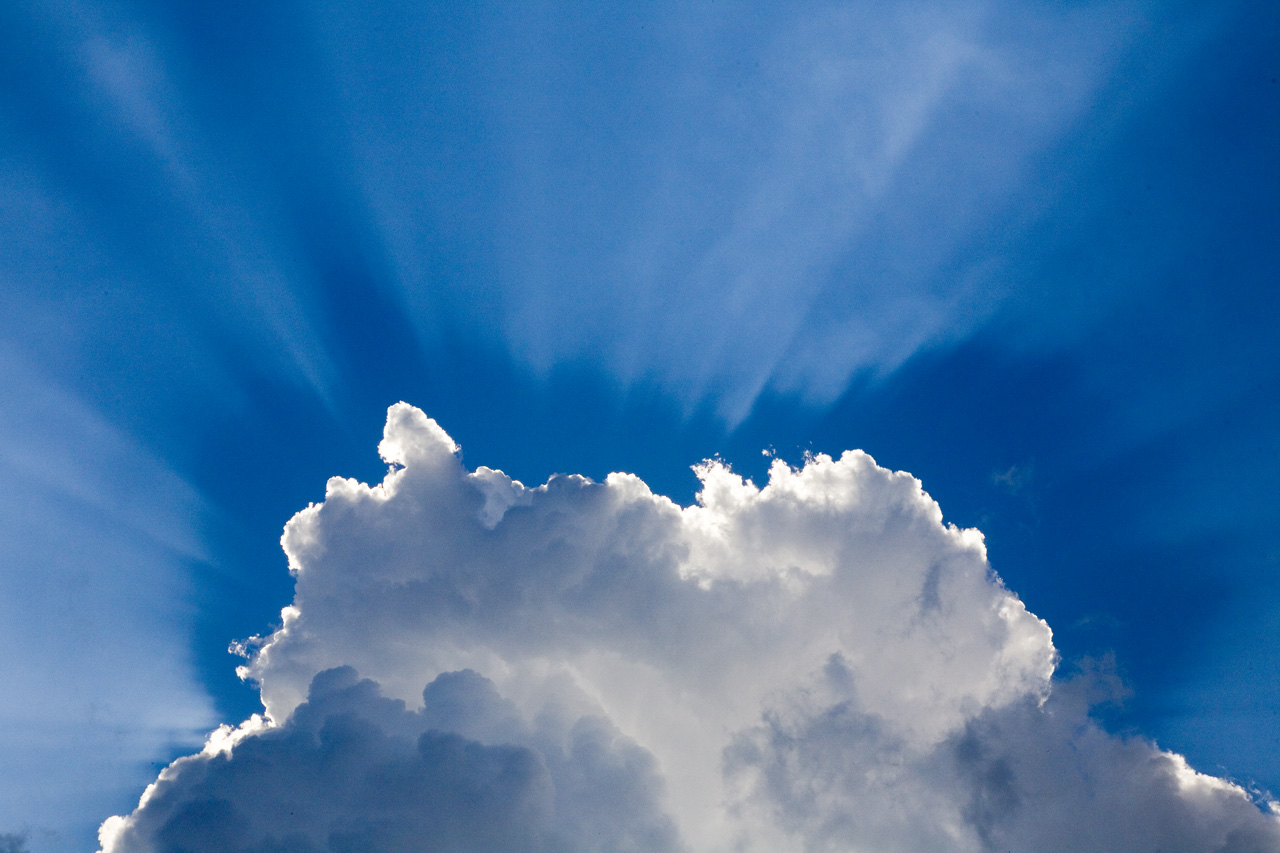 Kenneth Hart is such a mannerly crackerjack poet that you hardly notice what’s waiting under the surface until it’s too late. What I value most about Ken’s poems is the way they carry you along with their wry examination of the absurdities of 21st century life until, somewhere along the way, the poem’s beating, tender heart begins to make itself heard. You enter and exit the poem in different states of mind and are left wondering—what the hell happened? How’d he do that? So enjoy, but don’t say I didn’t warn you. ~Susan Lilley

This morning the sky takes on the look of one of those inspirational calendars,
all illuminated-edged cumulous with light rays stabbing through like purifying swords,
His Glory in pastel script right about where my neighbor’s SUVs are parked out back,
one black, one silver, miracles
of engineering, collecting light and splotches of berry puree
from the chickadees singing high hosannahs in the overhanging branches.
Gnats speckle the air like protein-filled snowflakes for the looping swallows
tying knots on the air, and in the distance, “M” shapes I always crayoned
into early drawings to represent gulls.
I should know not to answer a knock on the front door this early on a Saturday,
but when he shakes my hand and introduces himself as Cain, I think,
strange, for a mother to name her son after the world’s first murderer.
No older than thirty, clean shaven, handsome, slicked hair and a tie under a black
leather jacket,
he asks, in a drawl, “If you died today, do you feel you would go to Heaven?”
I am still in pajamas, socks, not half-finished with my coffee,
hair wild and head banging from so many beers last night at a downtown bar called
Darwin’s Theory,
where the unsaved, drunken fishermen, local dregs and tourists on holiday
lined up like rotisserie chickens above the alcohol flames, basted well into the night,
our cracked song and laughter and arguments rising from that pit and spilling onto the
street in a cacophony of what Cain might have called devil worship.
He hands me a small glossy pamphlet and an invitation tomorrow morning
to the Baptist church a few blocks away I didn’t even know was there.
I don’t dislike him, and like him more when he shakes my hand a second time
and leaves three minutes after he knocks.
Door to door he goes, alone (though never Alone, I guess) under a tousled sky,
he certainly feels better than I or anyone else from that seedy bar feels this morning,
many of whom are likely still asleep.
Maybe a few will be in church tomorrow. Cain will be there, pleased
if he recognizes a face or two from the day’s work, whose names he’ll surely remember
as he reintroduces himself after the sermon and the singing and the prayers.
But I’ve got my backyard and my coffee and my birds to look at, my little paradise,
even as I hear the gear-shift and braking of the recycling truck two blocks away,
a symphony of our soft drink and liquor bottles jingling through the shrubbery
like a Greek chorus, prophesying some new dispensation,
while honey bees nuzzle the dianthus, and climb stunned out of the blue trumpet
of my neighbor’s lily—
mutual mutations casting shadows on the fresh-cut lawn, its chemical green
for which God can only take half the credit.

You probably have noticed people who use the words
not as an act of contrition
but as a preface to aggression.

“I’m sorry but I ordered my entrée thirty minutes ago.”
“I’m sorry but you’ve got to be fucking kidding me.”
Some people say it like this a dozen times an hour,

not just as a way to soften the blow that’s about to arrive,
but to align the pad and give themselves
permission to launch the rocket,

and those two words are the snapped ropes
dangling behind the speeding fuselage,

while the older meaning hangs in some kitchen
between two bowed heads,
looking for someplace safe to land.

My failure felt more pure
because, for once in my life
I didn’t make an excuse for it.

To let the other have the last word,
like the last knight on the battlefield
holding a sword, after the long fight

where we each re-trenched, and fortified
the walls of our positions—
Oh, the liberty of laying down one’s arms!

There is a beauty, after all, in not caring anymore,
accepting that one is too tired

and in knowing, finally, that any reply—
even “You win”— would set off
a new round of punishing engagements

with my enemy, for whom
I am still, after all, mad
with love.