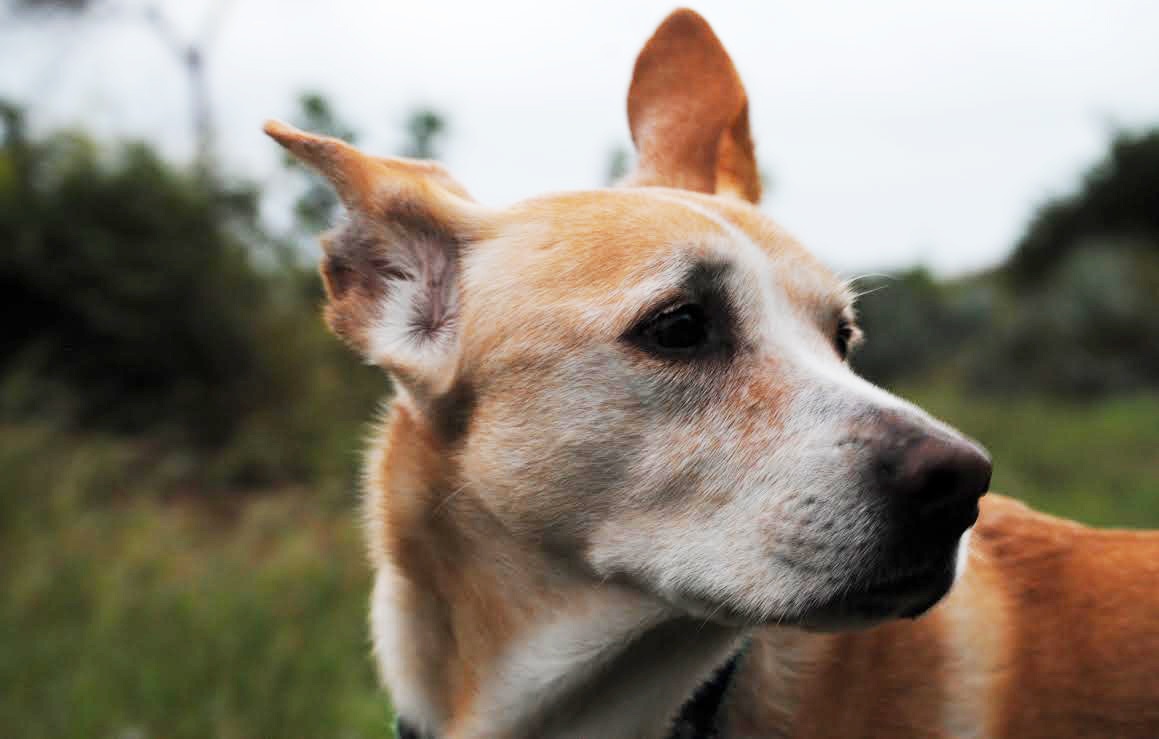 “One of the beauties of place is that it has the ability to imprint itself upon us in an instant.” — Julian Hoffman

The thunder and rattling has drifted off. But Sandy hound’s wisely not taking any chances. She stays down in her coffee-stained floorboard shelter, where the steady third-gear hum of the old Tacoma’s engine helped drown out the thunder as we passed the big, new two-story homes behind walls, the last of the modest retirement homes, teal and yellow, and then through Wimauma — the narrowed road straight as a plumb line and empty in the hard rain — before the first of the tomato farms and small ranches and the old phosphorous mines, some of them long since abandoned.

Now, the thunder’s just a faint remnant, and we’re waiting out the rain, and Sandy hound stretches her legs, one of her paws resting gently atop my left foot. Some Yoakam comes on the radio, but I can only make out a few broken lines above the rain and static.

In the rearview, I catch a resemblance I had yet to notice. Maybe because I haven’t seen many photos of my father as a young man. Maybe because my mom always claims I don’t look anything like him. But I recall what my uncle’s friend Terry told me just before I left home. A mountain of a man, after giving me a bear hug, Terry said, “You know, Rog, you look just like Sach when he was your age.”

I have to acknowledge there is the resemblance, the taunt trace of the Native-American bloodline and a kind of shared expression. But that’s where the similarities between me and my old man end. Yes, that’s what I tell myself. But you know how that goes.

Sandy hound is up, leaning her muzzle against my shoulder and looking out, appraising the weather.

Leaning the bike against a burnt-out snag, with palmetto at its foot, I take the thermos from the pack, and I take a good sip of the strong coffee Sandy hound stretches in the already drained, but still-damp sand.

My bike-stand pine is charred inside, the smooth trunk twisting and turning like a lightning bolt landing down. The palmettos’ charred too, but some new growth has shot up.

Though the thunder’s long gone, and the rain’s mostly let up, a cold fog remains. It’s too cold for the butterflies that might, on a sun-warmed morning, circle the wildflowers growing from the tangle of palmetto and brush.

I shed my flannel, because it’s soaked through the shoulders, and roll it up and stow it at the bottom of the pack. To the west, there’s taller palmetto growing up into a silk bay shrub, and a few yards past scrub pine and a lone cabbage palm, and I’m grateful for our little, scrabbled windbreak here. The double-dose coffee’s good (tiny grinds that made it through the press and all), and it’s still warm. That I’m grateful for, too.

And on this chilly wet Florida November morning, we’ve got the trails to ourselves, the way I had the pines behind my childhood New England home to myself those first real cold mornings in the fall. Scrawny and clumsy as I was as a young boy, when I finally wound down the two miles from the hills to the open edge trail between the forest and reservoir shore, I felt a lightness to my step. I would sometimes watch a hawk flying up over the fog. But of course I couldn’t fly, even if I prayed that I could. Even if I only wanted go find my dad. Maybe catch up with his fading Cadillac DeVille, for I knew where he might be.

Mapped in both flat-terrain and steep contours on the atlas and cut by Bell Creek, a tiny tributary of the Alafia River, the Balm Boyette Scrub Preserve is just over 5,700 acres. The county-owned natural area is just east and south of Tampa’s suburbia, and an hour north of my home in Sarasota.

We may not be in the midst of a remote, expansive wilderness, and it may be this weather and all the caffeine, but there’s something special here, where just a small piece of land was left untouched, this small remnant of pine scrub ecoregion that was once an island in an ocean.

A place rooted in another time, this scraggly patch is as untamed as it is flat, and I think of how author Rick Bass writes,“We need wildness to protect us from ourselves.” But there’s no reason that wildness has to be encountered up in the steepest mountains or middle of a 150,000-acre swamp.

Even though we’re barely two miles from Balm Boyette Road, I can no longer hear even the occasional SUV back on the two-lane pass. Yet there is the sound of the palmetto spines to both sides of the narrow trail whistling in the winds. The rustling of the silk bay tree joins in, when the westerly winds really pick up.

Just off the singletrack, softly and curiously as a cat, the hound noses the long-stemmed, winter-blooming wildflower, pale white and fringed with crimson. She’s startled when the rainwater funnels down the leaves onto the white of her muzzle. Shaking off the cold water, she gives another sniff, from a safer distance.

Fine crystalline specks stick to my legs when I sit cross legged. The sand is cool to the touch.

Sandy hound’s laying now like a Pharaoh hound, yet careful not to sink into the still-damp and rain-marked sand. Maybe she’s longing for the absent sun, too.

We listen. With the winds coming across, it feels like we’re on an island. A scrabbled, patchy isle in rough seas.

Shortly after I moved down to Florida, a neighbor, a kind old gardener, told me about the Highwaymen painters, a group of 26 African American landscape artists, self taught and self-disciplined in Florida. Later, I picked up a dusty copy of a Highwaymen art book at a secondhand bookstore. There are a good number of backcountry paintings in the book. Alongside the beach and sea scenes, these are the rougher images of native flatwoods, slough, hammock forest, and swamp. These beautiful works of some of the state’s last wildlands are the result of practiced workmanship. But I don’t recall many paintings in that book of scrub habitat. I guess that may be logistical, for here there are none of the tall slash or longleaf pines or cabbage palms on the horizon to frame the canvas, nor wading birds to add serenity.

Yet if I could paint, I’d paint this island and its grays and pale greens, under basalt clouds. It’s a small island, preserved after so much time by fire (ignited by occasional lightning and the periodic prescribed burn,) and modest isolation — surrounded by reclaimed phosphorous mine lands and cornered by two roadways — yet somehow untouched by the ebb of civilization’s more ambitious activities.

I would try to paint the scraggly pines and dwarf oaks and palmetto the way John Maynor, one of the original Highwaymen artists, painted his trees, so it looks like you can reach out from a dream and touch the textured bark.

This morning, there’s no colorful sky, no streak of pastel in this landscape scene, but there are touches of color: there’s Sandy hound’s wildflower; and the pale-emerald palmetto turning in the wind; the copperish leaves of the staggerbush; the faded bunchgrass. I’d open my tackle box of brushes, and I would try as best as I could to get the worn gray of the snag pine, askew, and the almost white of the loose sands. Or I could just start sketching it now, as Robert Butler would have, before I think too much and ruin it. Not rushed, but working while the imagery is fresh on my retina. Getting started while there’s motivation and some of the good stuff left in the thermos. The scrub snag would look best sketched anyway, the dulled ridges and pebble-smooth branches  captured in pencil. The snag just taller than the other pines.

But I can’t draw a line. I imagine, though, it’s similar for the artist and the writer, you have to start a draft somewhere — Right? I ask, aloud to myself and my companion.

I’m noticing a short — less than knee high — pine sapling sprouting from almost within the weathered snag trunk. I start to walk closer, but I stop myself, because I don’t want to trample through the fragile tangle of brush and ground lichens.

I place the empty thermos in the pack, and the hound’s ready to hit the trail.  As I hop in the stirrups, she runs ahead and kicks up the loose, deep sand on a long straight. I push it down into a good gear.

The trail twists through harder packed sands and sharper cutbacks. Where a narrow and shallow escarp cuts south, the singletrack keeps east.

Through the first big one, the hound stops, looks back, and waits for me to catch up. Then, when I come through the cutback, she bounds ahead.

Through another straight heading into more of the same flat, open scrub, the sand’s up to the bike’s rims. We keep on at a steady pace, the wind at our backs.

But ahead the clouds look ominous. The hound takes notice. A heavier, basalt hue to the sky now. A colder mist to the wind.

And there just ahead a warbler, pale yellow and drab grays, flies across the trail, landing in a pine that looks as if it was sculpted as a bonsai.

We’ve only got a little time before the cold rains return. So we keep on trucking through the damp sand.

Before we double back on the double track, I look back and glimpse the last trace of the narrow trail, and back to the west, the tip of the old burnt-out snag just above the faded greens.