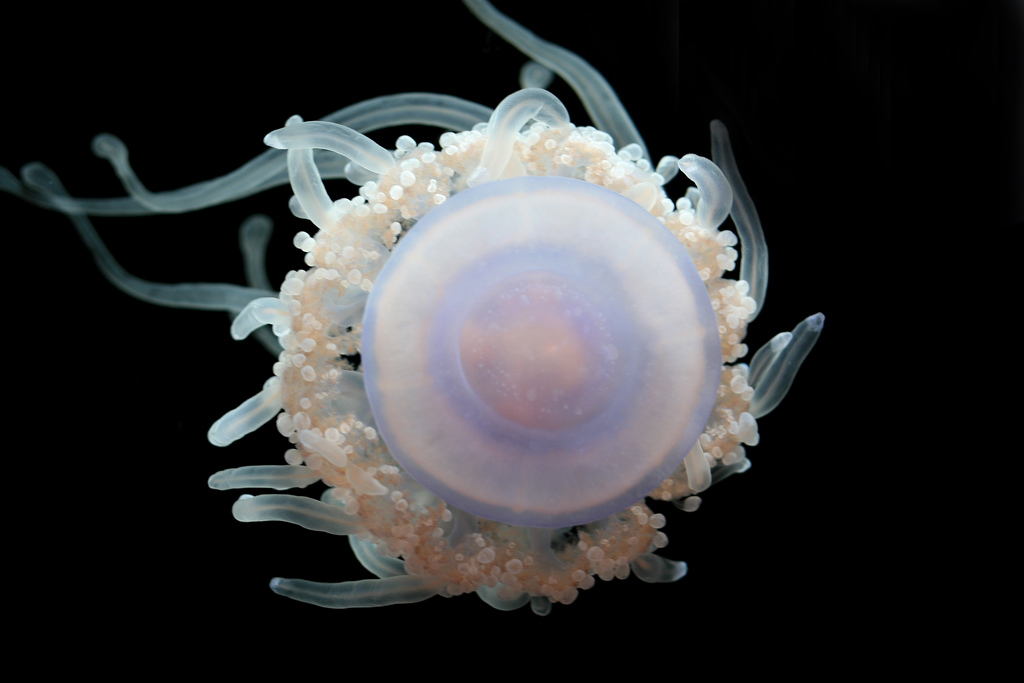 If you can arrange it, the best way to see Barcelona’s piece de resistance, Gaudi’s Sagrada Familia cathedral, is on a gurney, with someone to push you around inside while you lie on your back to study the heights of its sublime architecture – the tendrils of stone bridging space that any other cathedral architect would have left bare, austere and angular. It will save you a trip to the chiropractor to have your neck ratcheted back down to a normal angle.

Even standing outside the Sagrada, taking in the enormity of its footprint, spatially as well as temporally – for it’s been under construction over 100 years and isn’t projected to be complete for another couple decades – requires unnatural positions of one’s upper anatomy.

The interior of the Sagrada is a study in the geometry of light. Spare in Christian iconography, the cathedral’s illustration of the ethereal is supreme. Let there be light. And Gaudi let there be. Go toward the light. And the visitor goes. Gaudi’s representation of God isn’t in scenes of stained-glass parables but in the purest form of white, circle, asymmetry and the pliant intricacies of organic complexity – light and pattern that transcend anthropomorphism in spirituality. Inside the Sagrada one feels more in mind of Emerson: “I become a transparent eyeball. I am nothing; I see all. The currents of the Universal Being circulate through me. I am part or parcel of God.”

Gaudi uses both natural sun rays and electric bulbs for maximum effect inside the Sagrada: a total immersion in element, naked light and its speed, an absolute fundament in understanding and calculating the nature of the universe and its sensuous curves – the roundness of planets and elliptical orbits, spiraling galaxies, nebulas with chaotic borders, the entire universe expanding like an inflating balloon or a ripple on a pond.

In the Sagrada, light falls on the shoulders of visitors in patterns of circles, as though the heavens are polka-dotted. Large round drops of light splash onto the floor. Loads of people sit silently in chairs staring up or out. I wonder what they’re thinking – whether about form, about what they had for lunch; maybe they are having religious epiphanies, or perhaps they are empty of thought. As I stood beside them I was thinking about circularity (frankly, how could one not?), about the most obvious one in our existence – life, death and renewal.

There, above the web-like filaments of stone, are the dens of angels. I am unlikely the lone soul to have perceived this while studying the lattice of illuminated circles. But while looking up with a hundred other slack-jawed tourists into the umbrella of light that is the ceiling as a whole, perhaps I alone realized that God is a jellyfish. A creature of the sea, even if not Earth’s sea. A creature evolving much as we did from the basic building blocks presented by an inanimate universe. Perhaps we are only as old as each other.

The hallmark of all Gaudi architecture is the allegiance to nature as its inspiration and blueprint. “Architecture creates the organism …” he said. The heights of the Sagrada pulsate, quite obviously to me, as a bulbous jellyfish cap, its tentacles merging into the stone columns with a biological fluidity, like an upside down anemone, while an ocean of humanity swims beneath it in the droplets of light.

As an agnostic, I have had no clearly defined concept of the power that may have created us and the universe. Therefore, every new landscape I see, every new architectural masterpiece, every new culture and tradition I encounter, every song, social custom, back road, inroad, side road, every manifestation of lightness or darkness has the potential for revelation, for sudden insight into the value of this unknown variable. I’m not trying to convert you, but in all honesty, it’s a glorious way to travel, as the world opens up to me on its own terms, whether whimsical or profound.

It was Gaudi’s belief, “ … without truth there is no art. To find the truth one should know well the beings of creation.” What better place to look for these beings than within a cathedral built to reflect the spirituality Gaudi found in nature?

Why should the beings of creation be particularly cerebral? Even single cells can create things beyond their own comprehending. Nothing in the universe can exist without the element of light. E=mc2; mass multiplied by the speed of light squared gives us energy, and hence, life. Surely, procuring a continuous supply of light is the primary occupation of a being of creation.

So when death besieges us each, God The Jellyfish will unfurl his tentacle arms and pull our souls into his gelatinous mouth, feeding on us in order to produce more light. When I start to fall irreversibly through the hourglass, wheel me back into the Sagrada Familia on a gurney; it will be easy this way to take my body back out once my soul is up in the rafters, waiting in a den of angels to be digested into the universe by luminescence, by photons both particle and wave.