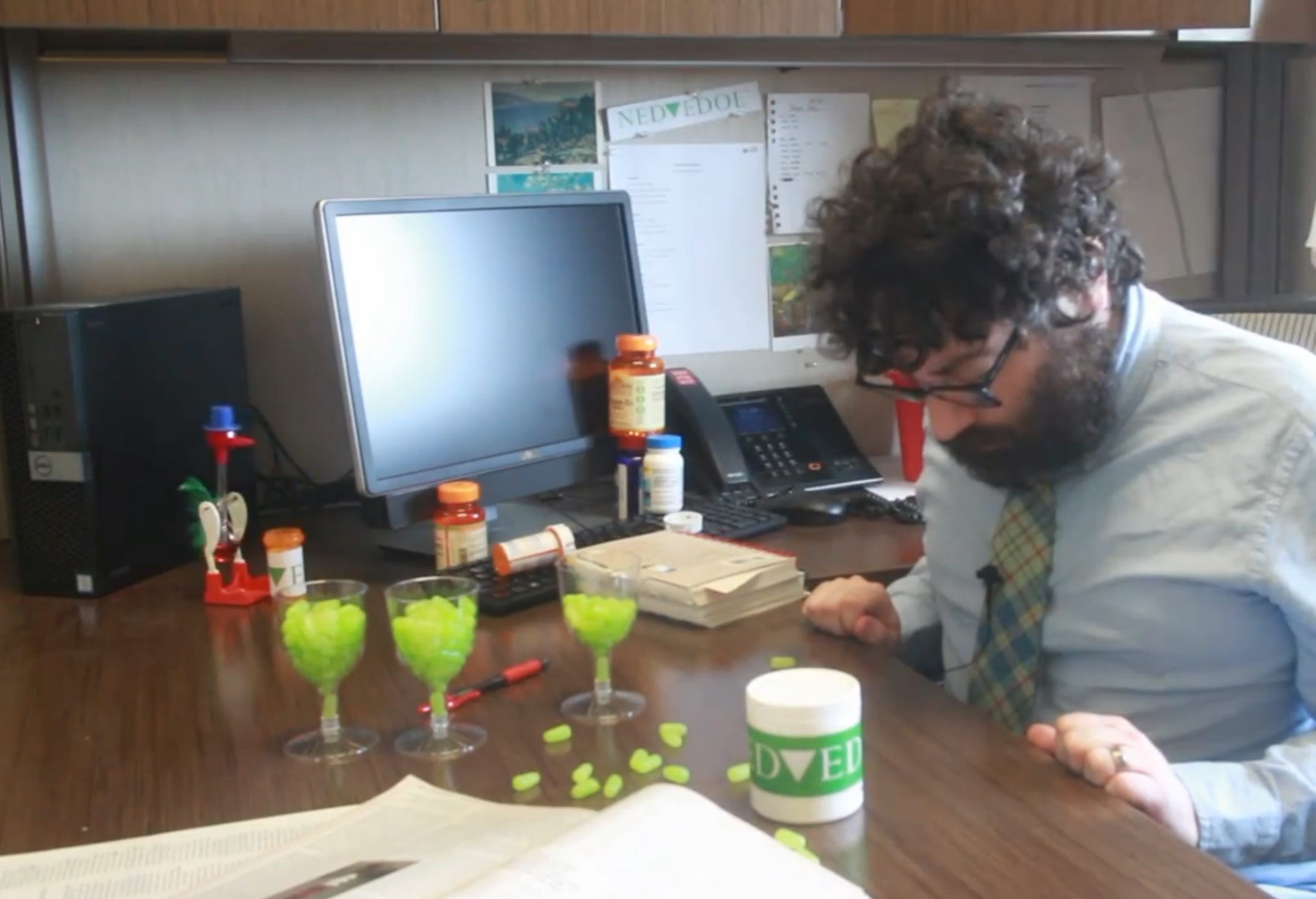 Ten years ago, when Ben Gwin began writing Clean Time: the True Story of Ronald Reagan Middleton, a satirical novel about a drug addict turned reality TV star, he imagined the culture would soon outpace the project. The impetus for parody had been fueled by the arrival of addiction-themed reality shows like Intervention, and the popularity of (since debunked) recovery memoirs like James Frey’s A Million Little Pieces. That the country still reels from addiction and has elected a reality TV president brings Gwin no joy. For him, the relevance of the book is not only cultural, but personal, based on his own experiences with addiction and recovery. Ben discusses how he ended up writing about such serious topics through a comic lens in this recent interview with The Rumpus.

Framed as the drug-addled memoir of Ronald Reagan Middleton, annotated and published by Harold Swanger (three semesters to a PhD), Clean Time features all kinds of fictional inventions. A TV show called Werewolf Hunter, which inspires a serial killer to hunt and slay addicts. A drug called Nedevdol that is supposed to cure addiction, which is produced by Philson Pharmaceuticals and distributed, without yet having been FDA approved, to addicts at the Rose Thorn Recovery center, which doubles as the set of a reality show called CLEAN TIME, on which addicts compete for viewer approval ratings in order to stay in rehab. This describes roughly 1/8th of the middle of the novel, but you get the idea. When we developed the book trailer for Clean Time (see above), we wanted to make something that existed within the world of the novel, hence the fake prescription drug commercial. Ben has taken this out-of-book experience a step further, creating a website run by Harold Swanger (who outside the frame of the book is still looking for the missing Ronald Reagan Middleton).

It’s a sprawling, ambitious book, and today I’m proud to be officially sending it off into the wild. I hope you’ll grab a copy from Burrow or your preferred indie bookstore, online retailer, or black market bookseller. If you’ve been following Burrow for a while, perhaps you’ll consider going one step further and becoming a Subscriber, which will get you all the books we’re publishing this year, including, of course, this one. Below you’ll find more info on Clean Time and links to purchase it. Thanks for reading.

“If Vladimir Nabokov, George Saunders, Denis Johnson, and Hunter S. Thompson were trapped in an elevator for a month, they might conceivably come up with a book as funny, frightening, and entertaining as this one.”
–MICHAEL BYERS, The Coast of Good Intentions 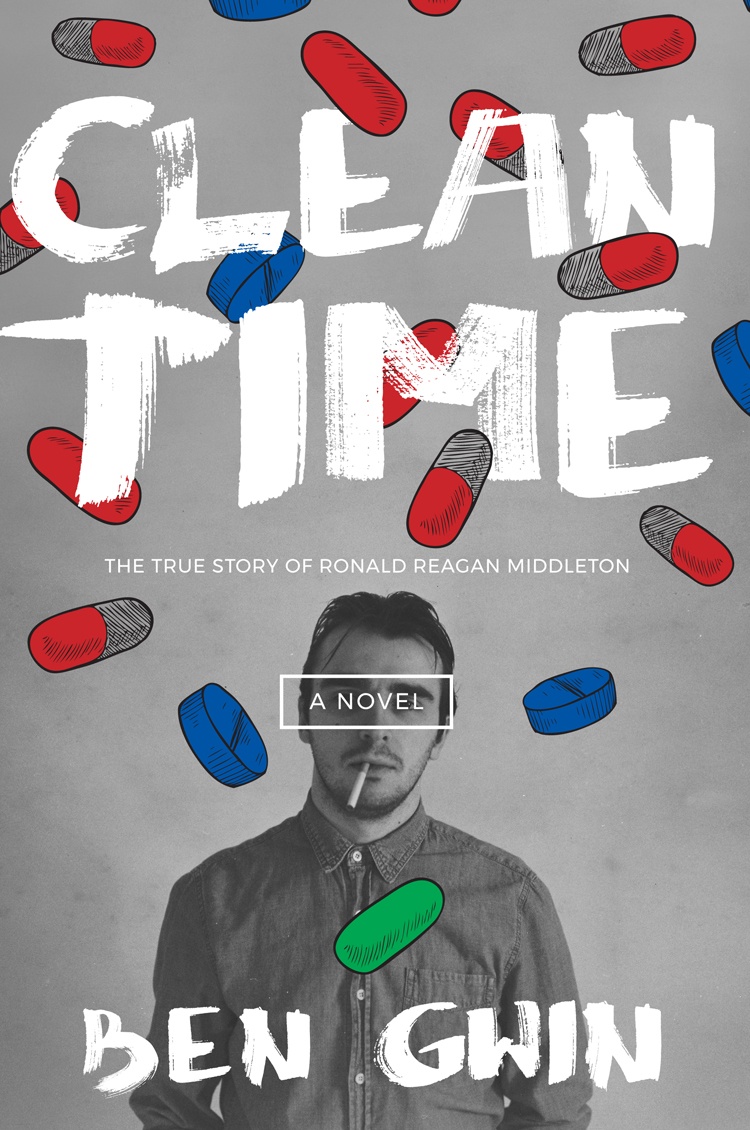 “Ben Gwin writes like F. Scott Fitzgerald high on meth and Clean Time is The Great Gatsby for a generation that thinks fame is the answer to every question.”
–LORI JAKIELA, Portrait of the Artist as a Bingo Worker

“A nightmarish dispatch from America in the age of Donald Trump.”
–DEREK GREEN, New World Order

“Clean Time is a meta novel so good it will end all meta novels.”
–DAVE NEWMAN, Please Don’t Shoot Anyone Tonight

Beginning with journals written in jail, Ronald Reagan recounts his days in Booth, North Carolina, where he had a semblance of peace, a job manually distressing designer jeans, and a girlfriend with a lucrative drug dealing operation. After his inevitable arrest, Ronald Reagan’s parents send him to a North Jersey rehab center, which doubles as the set of The Recovery Channel’s reality TV show, Clean Time. Here, Ronald Reagan is prescribed Nedvedol, a new drug engineered to end all addiction. His viewer ratings spike as he interacts with fellow addicts and meets a new love interest, quickly achieving celebrity status. Though he seems happy performing for the cameras, his journals tell a different story. He’s become dependent on Nedvedol and can think of only one thing: escape.

Chased from rehab back to his squalid life in Booth by a salacious TV producer, a relapsing counselor, and a serial killer who targets addicts, Ronald Reagan struggles to stay clean while continuing to hit new bottoms.

As Ronald Reagan’s life spirals out of control, Harold Swanger’s narrative interruptions become more frequent, his endnotes increasingly dubious. In a poor attempt at academic notoriety, Swanger presents Ronald Reagan not as a troubled, lost, and obnoxiously privileged drug addict, but as a new kind of American hero.

In this sprawling and ambitious debut novel, Ben Gwin masterfully balances farce and irony with a genuine compassion for the large cast of characters that fumble through a nightmarish and all-too-familiar version of America.