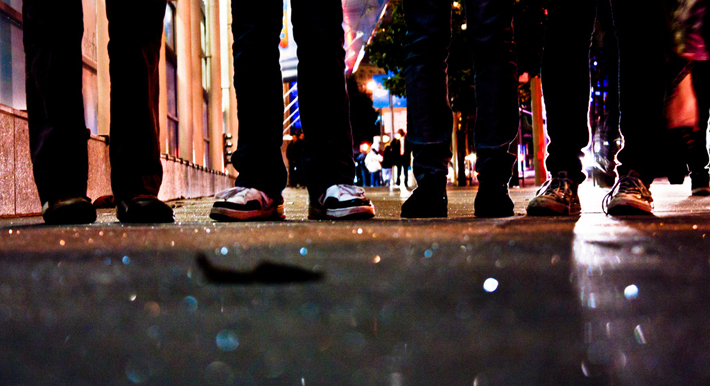 We fucked up Jason’s roommate, Jeremy. Truck was totally sick of that pussy’s mouth and he wrapped a bath towel over his face and punched him until the towel was red. I was kicking him where he fell and even Jason, who lived with the douche, kicked him once or twice. I thought that would be it, Jeremy just laying there moaning beneath the bloody towel, but then Truck dumped the bottle of vodka we’d been drinking over Jeremy’s face and dropped a match on it. The towel burst into flames and Jeremy came back to life, jumping up and down, clawing at his face and screaming.

Somehow, the cops seemed to be there before the fire was even put out. Jason poured a pot of water over Jeremy’s head. I was on probation and didn’t need that shit, so I climbed out on the fire escape. “Psst,” one of the sexy girls from upstairs called. “What’s going on?” She was leaning at the open window, looking out, crouching next to her sexy roommate. They looked naked from where I was, hair all messed up like they’d come from bed. It was the middle of the night. I said, “It’s the cops. Can I hide in your place?” She made a look like I had said “Can I take a shit on your floor?” even said, “Ew!” I said, “Fuck you dykes.” Climbing down, I went slower than I wanted cause I’m afraid of heights. I unhooked the ladder at the bottom and it hit the sidewalk so hard it cracked the pavement. The lesbians were laughing at something, I thought at me, so I flipped them off and got the hell out of there.

Jeremy didn’t die, but he was fucked up for real. The cops picked me up and wanted to know if it was Truck who had set Jeremy on fire and I couldn’t lie and I suppose that didn’t make things any better for old Truck, but what could I do.

We figured when Truck got out of jail he’d totally fuck Jeremy up this time, maybe even kill him. Jeremy had gone off to school and become an anthropologist and was studying aborigines on an island off the coast of South America. I didn’t think there were any aborigines left, but Jeremy seemed to be making a go of it. He was still fucked-up looking, skin kind of pink and creepy smooth. He didn’t have eyelashes or eyebrows. Supposedly, he’d had a lot of plastic surgery. I would have hated to see what he looked like before.

It was a coincidence that Truck was out of the penitentiary at the same time Jeremy was back from studying savages. A bunch of us were treating Truck to his first drunk out of jail. Truck seemed different somehow, less alive. There was a haunted look on him. It was giving me the creeps and I thought I might lie that I had to get up early even though I was between jobs. But then Jeremy came in with some of his college friends and they played darts in the corner, drinking a pitcher. There was even a girl—kind of pretty, if short, and I think Mexican—who seemed to be with Jeremy even though he looked wicked weird. We were watching Truck and then across the bar at Jeremy and we could tell the two of them were pretending that they didn’t see each other. The tension was great.

Then, out of nowhere, Jeremy comes over and says, “Hey Truck, how’s it going?” like it was just the other day they last saw each other, like Truck didn’t burn his face off. Truck nodded, said hey, and Jeremy asked if he could buy Truck a beer. Truck said yeah, and the whole time Jeremy and Truck are acting like none of the rest of us are even present. I mean, I knew Jeremy back in the day too but he doesn’t offer to buy me a beer.