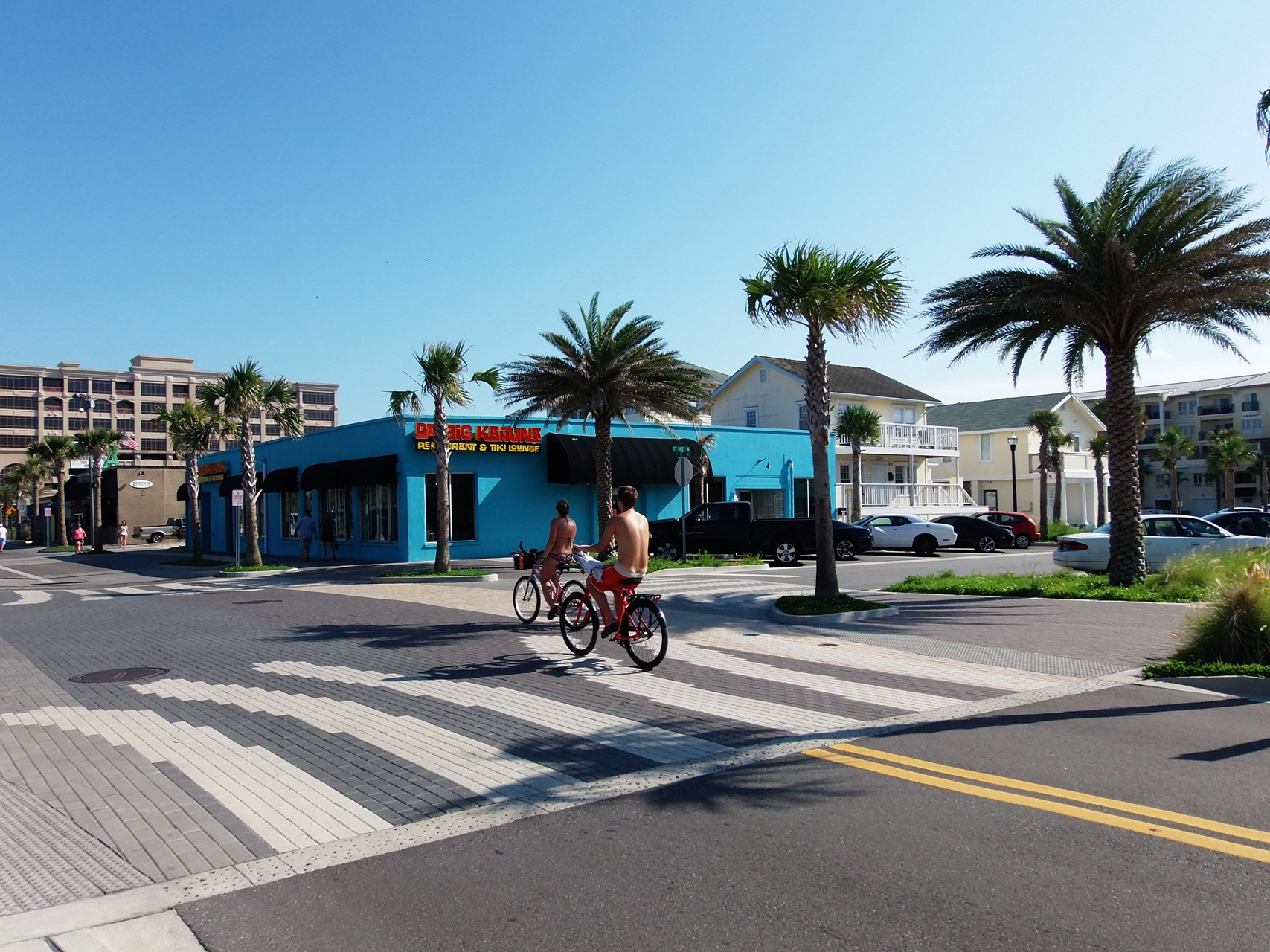 Big buildings stand sentinel on the shore. They are pink reflectors for the afternoon sun. Punctuation marks on the map of these crackerlands.

I’m under the shadow of the buildings in a puddle of asphalt. The black oasis is surrounded by sand and oiled bodies. Palms wish that they could have shade. They neglect the people looking for cover under them. This world smells like cooked coconut and sweat.

“Keep your head down. Bullshit is what greases the wheels and keeps this show moving.”

The mixed methaphors spill from the gentleman in the cut-off-sleeve shirt. I use the word gentleman questionably, but he’s driving a jet black Camaro so obviously he’s doing something right.

I’m leaning on my bicycle, listening to advice from a guy who just moved here six months ago. He, like so many other new New Englanders and northeasterners and mid-atlanticos has moved to a place he can call home after retirement. He thinks I’m a tourist. We all think the other person is the tourist.

He tells me about the black leather of his Camaro and why he chose that, even though his ass sticks to the seat whenever it gets above 90 (miles per hour or degrees, I’m not sure). His shirt says, “Jax Beach.” At least he’s proud of where he’s living.

He should be. We have it all. Cotton candy skies and quarterly monster truck rallies. Datil peppers, stuffed alligators, and a t-shirt for every beach.

“Pedal down…go.” He motions with his hands.

“You bet.” He nods, eyes peeking out just above the rims of a pair of Oakleys.

“Did you know where I can get the flat fixed?”

He doesn’t bother to answer.

The next block over, another man pushes his bicycle. He wears a reflective vest that reads “2001 National Scout Jamboree,” matching the reflective tape on the bike’s fenders. The earphone radio strapped across his head is missing the cover to the battery compartment. It’s also missing batteries. He bobs his head, regardless. Some tune is clearly winding its way through his sun-cooked head. He weaves around a fellow wayfarer in a wheelchair, mask on face and oxygen tanks strapped to their back, possibly on the way to scuba. He doesn’t look up.

We all dive in, sinking together, swimming in sand and acceptance.

Light flashes against my eyes, like the sun off crystal waters. But it’s not. The oscillating light is from the rims of the car in the Wendy’s drive-thru. Moving without moving, a sleight for the mind, from the same vehicle that rumbles my innards, even after I’ve just eaten.

A raisin, or an old woman, I can’t tell which, sits in a beach chair on the corner holding a sign that reads, “Jesus is the only way to heaven!”

But I know this life will have us ultimately judged by the size of our rims and how they spun. And how they did spin!

I see a bike shop in the distance, another mirage in the waves of radiating heat and refracted light. We live within the visible hot and walk on a sponge. I am a hotdog, roasting in these fierce canicular days, always looking forward to aloe-drenched nights.

“You can’t ride on puddles, man,” the worn hippie in the bike shop informs me.

He pulls his long, bleached hair back to look at me.

I look back toward the door and see the trail of black. My tires aren’t flat, they’ve melted. They drip on the floor as the shop-keep puts my ride on the rack and takes new tires out of the refrigerator. He expertly pulls off what remains of my old tires and spins the wheels after the new ones are on. I worry for his hair.

The six window units blow frosty air, occasionally coughing a tired hack. My brain solidifies and I stop stroking out. The neon sign above the row of A/Cs flashes “OPEN” and gives a red glow and urgency to the units’ laboring.

Flat fixed, I walk back out into the heat. On one corner a stray dog bites itself, trying to take its coat off.

I make the ride back to the parking lot oasis. I want to hear another story from the transplant in the Camaro. His wisdom is sage, and we’re all tourists.

I find him unmoved.

I think he stares out at the street, but can’t tell through his sunglasses. I follow his gaze. The scout in the headset lays a towel on the bench at a bus stop, maybe waiting for a bus. He slaps the side of his head where the batteries should be. The diver in the wheelchair passes him a bottle of water.

“When you’re juggling everything else in your life,” Camaro man pauses. He speaks slowly, deliberately. “Good luck with your headset.”

I swear his voice echoes.